We’ve looked at the volume of a pyramid, the formula for which can be found geometrically by a couple very different methods. Cones can be handled the same way, so we can skim over them. Let’s finish up by considering the surface areas of both cones and pyramids.

I’ll start with a question from 2003 that summarized volume and area formulas for pyramids and cones:

I first stated the formulas for volume and lateral surface area:

These formulas both apply to pyramid and cone alike, which is why I like them.

In the volume formula, B is the area of the base (whether a polygon or a circle), and h is the height, the vertical distance from the base to the apex. In the case of the (circular) cone, we can replace B with the formula for the area of a circle: $$V = \pi r^2 h$$

Then I just referred Aditi to explanations of the derivation of the volume formula, \(V = \frac{1}{3}Bh\):

The second link is the one we started with last week for the pyramid; the first does essentially the same thing for the cone, slicing it into cylindrical layers, including a proof of the summation formula we use. Next, I gave a quick derivation of the lateral surface area formula, \(S = \frac{1}{2}Ps\):

We can think of unwrapping the triangular sides of a pyramid like this:

The cone is similar; we’ll look at it below, but might as well see the picture here for comparison:

Surface area of a square pyramid

For a more detailed discussion of the pyramid, we can consider this question, from 1997: 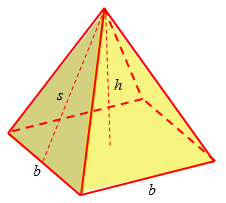 Note that the formula here will be not just the lateral (side) surface area we looked at above, but the total surface area, including the base. Different situations can call for either.

The height h and the base side b are shown in the picture above.

Here are our pyramid again, and that triangle inside it, from which we calculate s: 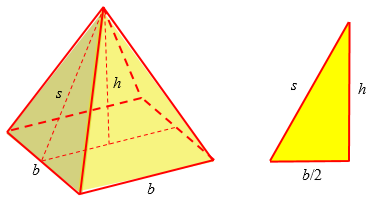 We often express this in two steps: $$T = b^2 + 2bs$$ $$s = \sqrt{h^2 + \left(\frac{b}{2}\right)^2}$$ This, of course, applies specifically to the square pyramid. And I find it easier to remember the base area and the lateral area separately, rather than memorizing a total area formula.

Here’s a quicker explanation of the surface area of a square pyramid, which will allow us to find a more general formula:

Andy already has a formula, probably something like our \(S = \frac{1}{2}Ps\). Here the issue is how to find that slant height s, much as we did in the last answer. Not knowing what kind of pyramid Andy had in mind, but guessing that it was not a really hard kind, I again chose to go with a square pyramid: (I’m going to change the variable I used for the base side to b, for consistency.)

I used the variable r for half the base edge because it is sort of like a radius. It would not be half the edge for other pyramids; in general it is called the apothem of the polygon: the distance from the center to the middle of an edge. The important thing is that from that and the height, we can find the slant height.

Surface area of a cone

Now let’s turn to the cone, with this question from 1999:

I answered with a picture like the one I showed earlier:

The angle at the center of the sector is a fraction r/s of a complete circle (360 degrees), so the area is that fraction of the area of a circle.

Compare this \(S = \pi r s\) to the area of the pyramid, \(S = \frac{1}{2}Ps\). If you replace the perimeter P with the circumference \(C = 2\pi r\), do you see the similarity? Our final question will make that explicit in providing an alternative path to the formula.

For an alternate approach, obtaining the formula for a cone from that for a pyramid, consider this question from 2003:

Now we apply this to a cone, thinking of its circular base as a polygon with a very large number of sides:

Many of our explanations in this series have been this sort of “risky” near-proofs, which would need extra work to provide full proofs, but are good enough for basic understanding!