The next few posts will look at a powerful technique for finding limits in calculus, called L’Hôpital’s Rule. Here, we’ll introduce what it is, and why it works. In the next post we’ll examine some harder cases.

The method we will be discussing is used to find limits that have an indeterminate form. We touched on this in the post Zero Divided By Zero: Undefined and Indeterminate, where we saw that 0/0 is indeterminate, because although one might think that anything divided by itself is 1, if the numerator and denominator approach 0 in different ways, you might approach any number as a limit.

Here is an introductory question from 1998:

Often there are special ways to determine the limit in such cases; but there is a single powerful technique that can be applied to all of them.

Now we’ll start with a question from a student who was curious how some limits can be proved:

Certain limits (e.g. \(\displaystyle\frac{\sin{x}}{x}\)) are commonly presented without proof, because they are needed early in calculus, but the proof would be beyond the students. These are not among those I would expect to see in that context; perhaps they were just examples. Since Kumarpal clearly hasn’t been taught specific methods for proving these, Doctor Rob used it as an opportunity to introduce one method to prove all of them:

The name in modern French is L’Hôpital, often spelled for English keyboard convenience L’Hopital, or sometimes L’Hospital (the older French spelling). We vary in how we choose to write it.

The main theorem provides a way to find a limit of the form 0/0 (that is, the limit of a fraction whose numerator and denominator both approach 0). The corollary (a theorem that follows easily from the main theorem) says that you can apply the same method to the form ∞/∞.

We’ll look at a couple proofs of the theorem below; there was no need to prove it for this student, but Doctor Rob chose to show how the corollary follows from the main theorem:

This idea of rewriting a function to make the rule apply to it is common in applying either form of the rule. If you are having trouble following this, the next to last line comes from dividing both sides of the previous line by {lim [f(x)/g(x)]}^2.

Now, Doctor Rob applied the theorem to each of the three examples Kumarpal had asked about. The first is the most complicated, because it is not in the form required by the theorem, and has to be transformed into that form first. You can skip this example if you aren’t ready for it; we’ll be digging into this kind next time:

The next problem is more straightforward:

Some textbooks teach the derivative of \(a^x\) as a formula to memorize, so you wouldn’t have to do any extra work for \(f’\).

That one was easy.

Now, suppose you aren’t willing to accept a “rule” on a teacher’s authority, but want to see why it works. You’re in luck; we have the same attitude! And we have been asked several times why the rule works.

We can start with a relatively relaxed approach, focused on seeing somewhat intuitively why it works, rather than a formal proof. Take this 2001 question:

Doctor Fenton answered, focusing on the graph and dealing only with the easiest case: 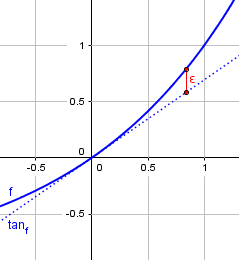 The important thing is that tangency causes \(\epsilon\) to decrease rapidly, so the line is a very good approximation close to a (which is 0 in the example).

In the last line, we divided the numerator and denominator by \((x-a)\), which is legal because while we are taking the limit, x is never equal to a.

One thing worth noticing is the importance of both functions approaching zero; a common mistake (which we’ll see in a later example) is to apply the rule when this is not true.

Here is an example, based on the second example in Kumarpal’s question above: 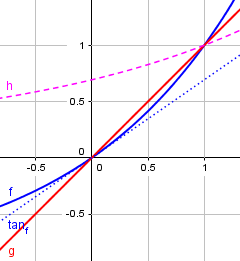 A proof based on series approximation

That was convincing, but not quite a formal proof, and did not cover all cases. Now let’s look at this question, from later in 1998, where we find two fuller proofs:

Doctor Anthony answered first, with a short explanation based on the Taylor expansion, which as used here is the same idea as the tangent line with an error term:

You may recognize the first part as equivalent to Doctor Fenton’s explanation, and the second as Doctor Rob’s proof of the corollary above.

Next, Doctor Rob gave a careful proof, for those who want more. He started by stating the theorem carefully:

As written, these two cases are the 0/0 and ∞/∞ forms we saw above, both assuming that x approaches a finite value and the ratio of derivatives approaches a finite limit, and requiring only a one-sided limit for now. We’ll see the other (infinite and two-sided) cases below.

He first proved the 0/0 finite case:

Notice that where Doctor Fenton quietly assumed that f and g were continuous, so that the values at a equal their limits, Doctor Rob, in this more formal context, explicitly makes that true by defining f(a) and g(a) to equal the limits, filling in a removable discontinuity if one exists. Also, his proof uses Cauchy’s Mean Value Theorem (which he proves below) where the others used facts about approximations. In effect, this theorem approximates a rather than f(a)!

Next, he proves the ∞/∞ case directly rather than as a corollary:

He then proves Cauchy’s Mean Value Theorem, which he used within the proofs above:

Now, he discusses modifying the proof for variants where the limit is infinite, and for limits on the other side or both sides:

Finally, he covers the case where the limit is taken at infinity rather than a finite value of x:

This is a good example of a thorough proof. Whereas for most purposes the earlier demonstrations that the rule makes sense are satisfying, a mathematician wants to make sure there are no loopholes. In doing so, he’s reminded us of all the different ways in which this theorem can be applied.

Next time, we’ll look at some relatively complicated applications of the rule, where we have to do some preliminary work before applying the theorem, or have to apply it more than once.

2 thoughts on “L’Hôpital’s Rule: What and Why”