A recent question about the application of the Fundamental Theorem of Calculus provided an opportunity to clarify what the theorem means in practice, and specifically how the two parts are and are not related. Misunderstandings like these are probably more common than many instructors realize! We’ll also glance at some differences among textbooks that can have a bearing on the problem.

Do the two parts disagree?

Here is the question, from Alexander in early October:

I have a question regarding The Fundamental Theorem of Calculus.

Let’s pause in the middle of the question to think about what he is saying.

The FTC is commonly stated either as two theorems, or as two parts of one theorem (occasionally given in the reverse order). Here, for example, is how it is presented in OpenStax calculus, which looks much like Alex’s:

Alexander continued with a specific problem in which he got confused:

I will show an example of what I mean:

Let f be a piecewise function defined by

First, I calculate the integral ∫01 cos2t dt, which can be re-written as

Here is where I encounter a problem. According to part 1 of the fundamental theorem of calculus,

However, according to part 2 of the theorem,

The answer says the second option is the correct one, which makes me confused. I can understand why, but I find it hard to know when the first part of the fundamental theorem of calculus applies.

When do you use each part? That is, indeed, the issue.

The crux of the matter

Doctor Fenton answered, pointing out the significant, but subtle, difference between the parts:

The statements of Part 1 and Part 2 are two independent statements, not directly related to each other. In particular, the function denoted F(x) can be a different function in each part, even though the same symbol is used in both parts.

This is important: Each part has different premises, and is to be applied in a different situation; they are not used in parallel, with reference to the same function. In fact, though it is not obvious on the surface, they are opposites.

Here is how Stewart presents the theorem:

Note that Stewart uses g in the first part and F in the second, making them look less similar; that is probably intentional, and shows wisdom!

The point is that if a function F(x) is defined by a definite integral of a continuous function f(t) with a variable upper limit of integration x, then no matter what the value of the lower limit of integration (as long as it is constant, and the definite integral is defined), the derivative of this function at a certain value x is just the value of the integrand (the function being integrated) at this same point x.

This theorem tells us that this will always be true, for any suitable function f.

(Note, by the way, that he used Part 2 (also called the evaluation theorem) to evaluate the integral; but that integral could instead be evaluated by actually taking a limit of Riemann sums, so the example of Part 1 doesn’t depend on Part 2.)

Another way to present this part (quoted from Briggs, a calculus text used at my school) is:

What about Part 2? Here is how Briggs states it:

Mimicking the alternative form of Part 1, since f is the derivative of F, we could write this as $$\int_a^b \frac{d}{dx}F(x) dx=F(b)-F(a).$$ So Part 2 shows that the integral undoes the derivative (in a particular way).

In Part 2, F(x) is not defined as this integral, but only as a function F(x) whose derivative F'(x) is f(x). You should know from your study of derivatives that if two functions F(x) and G(x) have the same derivative for all x in the common domain, F'(x) = G'(x), then there is a constant C such that G(x) = F(x) + C. So, if we know that F'(x) = f(x), then for any limits of integration a and b such that the integral ∫ab f(t) dt is defined,

Then since the left side of both equalities is the same, then

That is, for any admissible value of the upper limit b,

This time, rather than starting with f and defining a new function (F, or g, or A) as an integral, we either start from F and obtain f as its derivative, or start from f and (somehow) find an antiderivative F; either way, we start knowing that \(F’=f\) (which in Part 1 was the conclusion). Since there are many antiderivatives for a function, we need the subtraction, which counteracts the effect of the constant of integration.

How do we solve his problem?

Recall that the problem he was working was this:

Let f be a piecewise function defined by

The required integral looks like Part 1; but is it?

Here is a graph of the piecewise-defined function f: 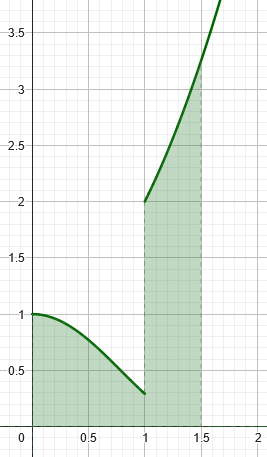 Note, incidentally, that both parts of the theorem, as given to us in all our sources, require f to be a continuous function, but this is not! The work will have to apply the theorem separately to each piece of the function. But we’ll see that the resulting function is in fact continuous (though not differentiable at \(x=1\)); and in fact Part 2 is valid even for a discontinuous function like this, as long as it is integrable. The area between two values of x will be the difference in the antiderivative we’ll be finding.

Now we can look at Alexander’s questions on the problem:

Does this help with your confusion?

So the full answer to the problem is

This work involved repeatedly finding antiderivatives of the given functions, and applying Part 2 to evaluate the integrals. To apply Part 1, we would need to have a function already defined as an integral, such as the answer we found! Then we would conclude that this new function is an antiderivative. In fact …

Here (in red) is a graph of the integral: 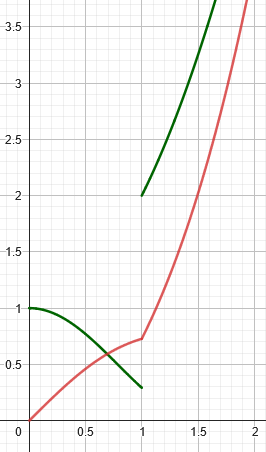 If you observe carefully, you can see that the slope of the red curve at any point is equal to the value on the green curve, which is what Part 1 says. That slope changes abruptly when the green function jumps: it is not differentiable there, so in fact this is not fully an antiderivative, because the condition of Part 1 is not satisfied.

The role of the variables

so to differentiate d/dx F(x), you must use the Chain Rule:

then its derivative is (by Part 1)

To check this, we can carry out the integration (using Part 2):

and the derivative is (by the chain rule):

which is just what we expect.