In the past (last May and November), we discussed ways to find patterns or sequences in numbers, sometimes leading to a formula. This included an example where the sequence turned out not to be just a provided list of numbers, but a process that generated the numbers. I want to focus on that type of problem this time; most of the examples we have happen to involve arrangements of cubes.

Hidden faces: all in a row

We can start with this question from 2002:

Amy had correct data, and a correct formula, as it turns out:

What she needed was to be able to convince someone (perhaps herself) that she was right: a proof. I replied, first clarifying the statement of the problem:

The second approach is what I used in doing my counting above. We can see that with n cubes, there are n bottom faces, and \(2(n-1)\) interior hidden faces, giving us the formula \(H = n + 2(n-1) = 3n – 2\). This is reminiscent of what we talked about in the post Counting Faces, Edges, and Vertices, finding an organized way to count.

What if we had been asked for the number of visible faces? We could use either of these ways to find it directly; or, having found the number of hidden faces, we could subtract that from the total number of faces on n cubes: \(V = 6n – (3n – 2) = 3n + 2\). (Interesting – there are always 4 more visible faces than hidden faces!) You can check this against the numbers I listed above.

For another example of the same sort of problem, see

Here is a more complicated question of the same type, from 2001:

Yes, math is more fun when you do it because you find it interesting!

I think a better description would be, “when rows of three cubes are placed together”, though I can also see it Nigel’s way. It looks something like this:

Here again, a “hidden” face is one that is either on the table or against another cube. For n = 1, there are 3 faces on the table (the bottom) and two pairs glued together, for a total of 7 hidden (and 11 visible).

Nigel has done some of the things discussed in the previous posts, Pattern and Sequence Puzzles and Pattern and Sequence Puzzles Revisited. He compared each term in his list (which must have taken a lot of work to compile!) with the square, and he also used another technique (the method of finite differences, which will be the subject of some posts here eventually) to determine that the sequence has a quadratic formula. Unfortunately, he’s wrong about that, apparently because he started with the differences between two related sequences, rather than between successive terms of one sequence.

I began by commenting on what he had done, and what he might do to correct it:

I recommended not starting with the numbers:

Since we always have a multiple of 3 cubes, I started by simplifying the variable, and then using the first method of the answer above:

This could be something like what Nigel did to get his table.

For a similar count (of cubes put together to make a large cube), see

Adding cubes all around

Let’s look at one more from 2002, this time not looking for hidden faces, but for the number of cubes added at each step. This one needs a little background: Kathy had initially just given us a sequence and her attempt at a formula, asking why the formula didn’t work for the first term; what follows is her restatement of the question after we asked for the context of the question:

Kathy is my kind of student — taking an interesting question and extending it in two directions (no pun intended): making it 3-dimensional, and asking a different question. Though she didn’t ask about it, let’s take a quick look at the honeycomb question first. We have something like this, where each color represents a new day’s cells: 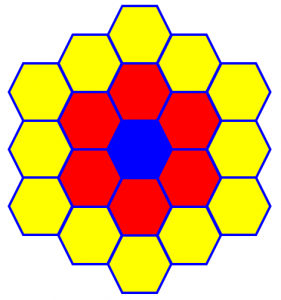 Our sequence representing the total number of cells starts off 1, 7, 19, … , which turns out to follow the formula \(a_n = 3n^2 – 3n + 1\). (See Centered Hexagonal Number.) If the problem had been to count the number in each layer, we would have the sequence 1, 6, 12, …, adding 6 each time except for the first, which would be the arithmetic sequence 0, 6, 12, … if it weren’t for the first term being 1 instead. So this problem would have raised the same issue Kathy raised in her own problem. It was the choice to count the new cubes (or hexagons) that caused her issue.

I responded to the cube problem: 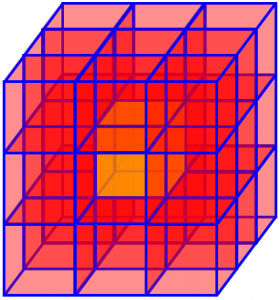 Does this formula agree with the data (after correcting the first line from 0 to 1)?

Hmmm … no, the formula is still off.

Is this a problem?

Real life formulas commonly have a “piecewise” aspect to them; and that, I think, is the main answer to Kathy’s question.

Adding to faces only would look like this (for n=2 and n=3): 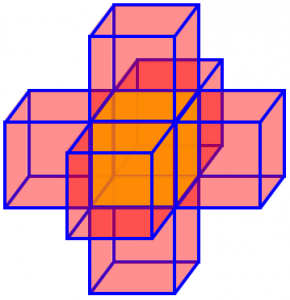 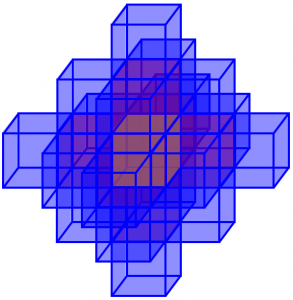 Have fun working out a formula …