For the last two weeks, we have examined new and old ways to think about proportions. This time, we’ll look at an old method called the Rule of Three (both “single” and “double”), and how you might have learned to solve these problems 200 years ago without algebra. Be prepared for a deep dive!

What math did Abraham Lincoln learn?

We received this question in 2003:

This comes from a brief autobiography he wrote; here is the paragraph in which he said that:

My father, at the death of his father, was but six years of age; and he grew up, litterally [sic] without education. He removed from Kentucky to what is now Spencer County, Indiana, in my eighth year. We reached our new home about the time the State came into the Union. It was a wild region, with many bears and other wild animals, still in the woods. There I grew up. There were some schools, so called; but no qualification was ever required of a teacher beyond “readin, writin, and cipherin” to the Rule of Three. If a straggler supposed to understand latin happened to sojourn in the neighborhood, he was looked upon as a wizzard [sic]. There was absolutely nothing to excite ambition for education. Of course when I came of age I did not know much. Still somehow, I could read, write, and cipher to the Rule of Three; but that was all. I have not been to school since. The little advance I now have upon this store of education, I have picked up from time to time under the pressure of necessity.

(For readers who are not familiar with American history, Lincoln was president from 1861 to 1865, and his only formal education took place off and on in the 1820’s. But in fact, he educated himself quite well in spite of that! And his “necessity” included choosing to study Euclid’s Elements of Geometry on his own in order to reason better.)

Doctor Rick answered the question, having found an explanation within a math problem based on the quotation:

It appears this comes from an article in Mathematics Teaching in the Middle School, February 2003. (The author seems to be interpreting the word “to” in the phrase “cipher to the rule of three” a little differently than we do.) I find the same example in a 2022 book by David J. Kent, The Fire of Genius:

So, the Rule of Three was how they solved a proportion to find the fourth number when you know three. But how did they do the calculations?

How the Rule of Three worked

The previous year we had received a question about the method itself, that led me to some research:

It is no surprise that Marjorie could not find information in 2002. I knew it only from a math history book (which I’ll quote below).

I briefly explained the modern way of doing it, explaining cross-multiplication much as I did last week:

I found a couple online sources; there are many more now, 20 years later!

These, of course, are what we call direct and inverse proportion (or variation). And that same inverse problem might be solved today without algebra by thinking in terms of “man-days”: the amount of work done by 10 men in 4 days is 40 man-days; with 7 men, it will take \(40\div7=5\frac{5}{7}\) days.

What the book says

I’ve found the source of the quotation, Fraiter’s Improved Edition of Walkingame’s Tutor’s Assistant; here is the first part: 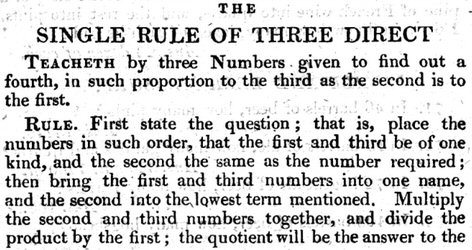 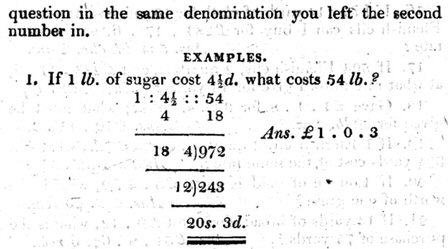 Here is a page by Lincoln himself (from Abraham Lincoln’s Cyphering Book – more on that below) in which he does the same thing, but ends up with an exact number of shillings: 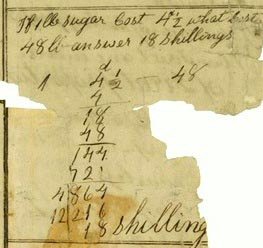 Here is Walkingame on the inverse rule:

The idea (and even the name) is very old:

It’s worth noting that the simplicity of the method does not mean that mathematicians of that time didn’t have deeper understanding, only that most students who needed the method were not expected to be able (or willing ) to dig deeper. They didn’t need to learn algebra to do calculations that could be very important in business.

My old math history book, by D. E. Smith, similarly tells of the antiquity of the method: 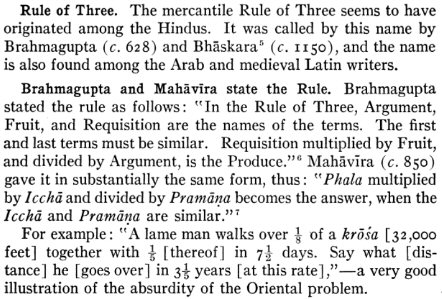 (It seems to be an old tradition, in many cultures, to teach basic math using absurd, unrealistic problems!)

Much later in history, we are told,

The comment about “one denomination” refers to units. The proportion must be written in a form like “miles : hours :: miles : hours”, in order to make sure everything matches up right.

How Lincoln learned it

Doing some more research now, it appears that Lincoln himself was likely using (in part) this book, by Stephen Pike. Here is his modified version of the direct and inverse Rule of Three, which he combined into one: 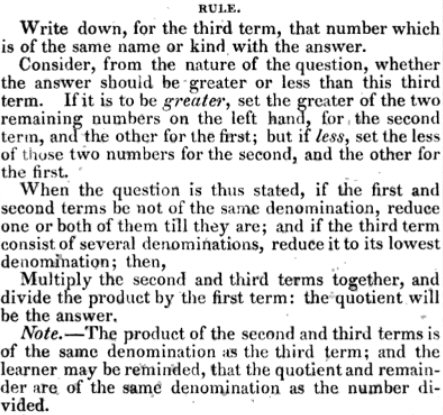 Also rather than use different methods for direct and inverse proportion, he arranges the numbers in such a way as to always form a direct proportion. If the two kinds of quantities tend to increase together (like miles and hours when you travel), it is a direct proportion; if the vary in opposite directions (like workers and hours in our man-day problem above), it is an inverse proportion; and two terms are swapped to adjust for this, just as we might write an inverse proportion by inverting one of the fractions. (He also has us, as we would do today, express quantities of the same type using the same unit, changing the larger unit to the smaller, and combining mixed units, like hours/minutes/seconds to seconds.)

But after presenting his modified method, he presents the traditional way, which treats direct and inverse proportion separately. First, he tells how to write the proportion in the first place, and determine the type: 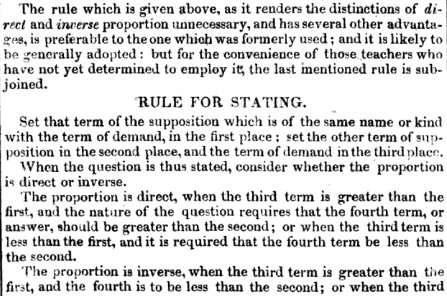 Looking at the example below, the “supposition” is that 2 yards corresponds to 4 shillings. The “term of demand” (the value that defines the case we are asking about) is 6 yards, so we put the “term of supposition” of the same kind (2 yards) first, and the other (4 shillings) second. This gives the proportion $$2\text{ yards}:4\text{ shillings}::6\text{ yards}:\text{__ shillings}.$$ Now we see that the third term is greater than the first (\(6>2\)), and we expect that more yards will cost more shillings, so this is direct proportion, and follow this rule: 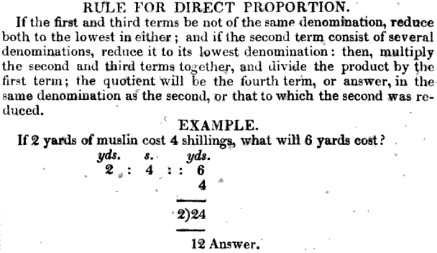 This is the method Lincoln used in the sugar problem I showed above, though he wrote his multiplication under the middle term.

In the next example, since we are asking about 8 days, we should put 4 days first, followed by the different quantity, 4 men, making the proportion $$4\text{ days}:4\text{ men}::8\text{ days}:\text{__ men}.$$ When we increase the time, we expect to need fewer men, so this is inverse proportion. (The labeling of terms below differs from what I just did; I suspect this is a typo!)

To do the same problem using Pike’s modified method, since the answer will be a number of men, we would put 4 men in the third position; and since the answer will be a smaller number (inverse), we put the larger number of days first: $$8\text{ days}:4\text{ days}::4\text{ men}:\text{__ men}.$$ This has converted the problem to a direct proportion. Now we just multiply and divide from right to left: \(4\times4\div8=2\) men as before.

In the midst of the set of problems, the author demonstrates the possibility of saving work by canceling, which we also saw last week: 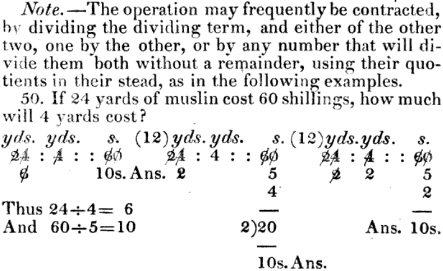 This solution is done Pike’s new way, with like terms together, and always in the form of a direct proportion. He shows three different ways to do the canceling – evidence that he does not expect his readers to work mechanically and never think for themselves!

The Double Rule of Three

There was also an extended rule to handle problems with more variables, and Lincoln learned this as well. Here is a question from 2013, again connected to Lincoln:

Here are those problems in Pike (the first two): 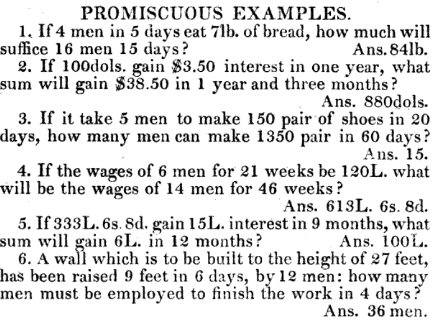 Here is Lincoln’s work for the first of them: 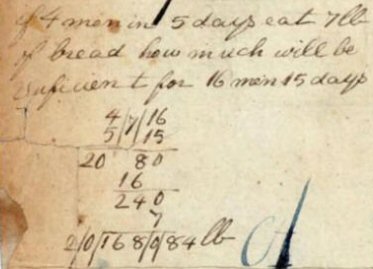 How it was taught (method 1)

These are the answers we’ve looked at above. I found a book from 1828, a little after Lincoln’s school years:

The arrangement amounts to a table in which the first row contains two inputs and an output for the fully-known case, and the second row contains corresponding numbers for the case we are asked about.

The first example finds the interest; the second finds the time. Neither finds the principal, as in our problem! We’ll need to leave the first place blank, but otherwise it will work like the second example.

This is what you might do today if all you knew was proportions.

The joint proportion is because i is a constant multiple of the product of principal and time, namely \(i=prt\), r being the constant of proportionality. Jerry’s error was in ignoring time, and just taking interest as proportional to principal.

But now we can see what Lincoln actually learned, and what he actually did. Let’s go far beyond what I did then.

Looking in the Pike book, here is how he presents a modified version of the Double Rule of Three:

This example shows the method, though it took me a while to understand it enough to be sure:

Here is Lincoln’s actual work on our problem: 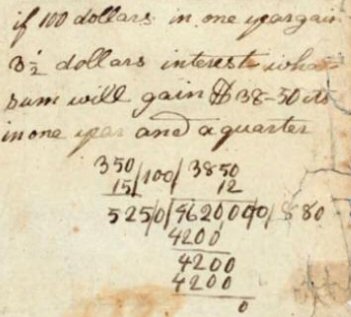 He is following neither Pike’s modified method, nor Slocomb’s arrangement above, but Pike’s “traditional” method, which is explained like this: 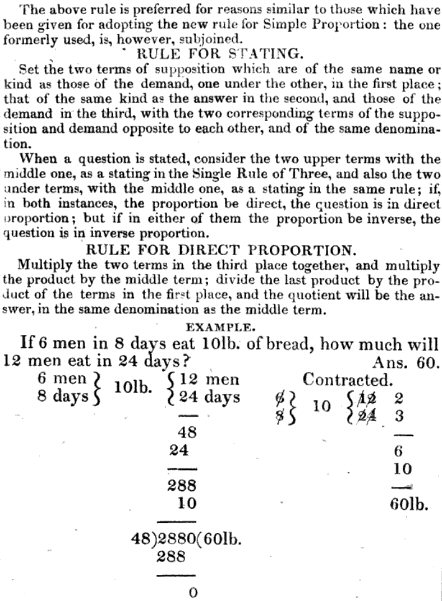 It takes a little patience to follow this! The terms in the demand are 12 men and 24 days, so they are put in the third place; the corresponding terms in the supposition, 6 men and 8 days, are put in the same order in the first place. This is much like the “new” method, but in a different order.

Let’s use this, and compare with Lincoln’s work. Our problem was

The “demand” is $38.50 interest in 1.25 years, so put those in the third column, and the corresponding terms of supposition, $3.50 interest in 1 year, in the first column; in the second place we put the term corresponding to the answer, namely $100 principal: $$\left.\begin{matrix}$3.50\\1\text{ yr}\end{matrix}\right\}$100\left\{\begin{matrix}$38.50\\1.25\text{ yr}\end{matrix}\right.$$ Now, is it direct or inverse? We expect that increased interest requires more principal, but increased time requires less principal, so this appears to be inverse proportion. We need to follow the rule for that case: 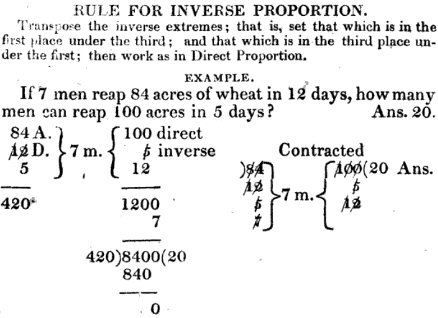 Because he left the $100 as dollars, the answer is $880. Converting to smaller units, as we saw above with farthings, was a standard way to avoid fractions, something it appears Lincoln would not have learned yet (or was just wise enough to avoid when he could).

It was a lot of work trying to understand these old books! I learned a few things I didn’t know, and one I did: