We discussed four years ago how to make a partial fraction decomposition of a rational function, and why it can always be done; a question from mid-May brings up two side issues: when you can factor the denominator, and whether a trivial decomposition, which takes no work at all, counts.

(1) How can I know for sure that a certain polynomial, such as x5+1, can’t be factorized?

For the method he is asking about, see my former post,

Partial Fractions: How and Why

He’s answered his own initial question by observing that if the denominator can be factored, then the rest can be done. But can you always factor? Is the denominator in his example factorable? And why can’t you just take his easy way out?

What can, or can’t, be factored?

Those are very good questions! Their answers rely upon advanced algebra results, some of which are at an upper undergraduate level, but a few of which aren’t too hard.

First of all, there is the Fundamental Theorem of Algebra, which says that any polynomial with complex coefficients of degree n has n roots (or zeros), counting multiplicity (i.e. repeated roots are counted with their multiplicity, so that x2-2x+1 = (x-1)2 has a single root, 1, of multiplicity 2). If the coefficients are real numbers, then complex roots must occur in complex conjugate pairs (for example, the zeros of x2-2x+5 are 1+2i and 1-2i, by the quadratic formula). You should already know the Factor Theorem, which says that if p(x) is a polynomial and a number a is a zero of p, i.e. p(a) = 0, then (x-a) is a factor of p(x).

So you can always find roots, and you can use them to find factors. (Well, that’s not quite right – the roots always exist, but you can’t always find them! More on that later. At this point, we’re talking theory.)

If you put those results together, any polynomial p(x) with real coefficients has n complex roots, r1, r2, …, rn, so it can be factored over the complex numbers as

If r is a complex root, r=a+bi, then its complex conjugate r*=a-bi is also a root, so the factors (x-r)(x-r*) can be combined into an irreducible quadratic

That means that any polynomial with real coefficients can be factored into a product of real linear factors (x-r) and irreducible quadratic factors.

So it is always (theoretically) possible to express the denominator in this form. He hasn’t mentioned, however, that this is an inherently difficult task; in fact, it has been proved that there is no formula or procedure that will find the roots of any polynomial with degree five or more (in terms of nothing more than radicals). For high degrees, being able to carry out factorization is rare.

That’s why the next comment is not trivial. If all polynomials can be factored (in principle), it is obvious that this denominator can – the important thing is that we can actually do it!

Incidentally, your example x5+1 CAN be factored. Use the Factor Theorem, since there is one easy root to find (can you see a zero of x5+1?). To find the complete factorization into one linear and two irreducible quadratic factors, you need to know about roots of unity. See

We’ll see below how roots of unity apply to this problem (as well as what they are). We’ll also see that that is not the only way.

Finally, there is a Partial Fractions Theorem which justifies the claim that every rational expression can be written in partial fractions form, but it is rarely proved. If I remember correctly, there is a proof in van der Waerden’s book Algebra.

If you have any questions, please write back and I will try to explain further.

We proved this (or at least gave an informal explanation of that proof) in the page I’ve referred to. But does this answer the question?

What is, or isn’t, a partial fraction decomposition?

Hi, I would like to add just a little. Doctor Fenton has said all the important things, but you may not see how he has answered your second question: whether your trivial decomposition is a valid partial fraction decomposition.

One angle on this is how partial fraction decomposition is defined. If you look at Wikipedia, for instance, you will find this basic definition:

I highlighted the last phrase, because it makes your decomposition invalid by this definition.

Juan’s decomposition kept the same denominator throughout. It was a decomposition, but not the kind we mean. It was, as he said, trivial.

Further along in the same article, we get more detail:

… the denominator gj(x) is a power of an irreducible polynomial …

So the full factorization Doctor Fenton talked about is the kind that is required for genuine partial fractions: linear, and irreducible quadratic, factors. (In addition, the fractions must be proper, so the numerators must have lower degree than the denominators.)

This was discussed in the previous post on the subject; there, for example, I said (in connection with a different specific issue) “Our motivation for partial fractions is their use in calculus, and that drives the required form of the fractions. What I suggested above would otherwise be perfectly valid, and we would not need all the specific rules that are taught. But then the calculus would be harder.” So the partial fractions concept is what it is, not merely because of the way we can factor polynomials, but because it is a tool, and the tool is designed to fit the problems it is used for.

Incidentally, though, it may be worth pointing out that even if you can’t rewrite an expression using partial fractions, there might be other ways to integrate it (e.g. in this case if the numerator were \(x^4\)). We have more than one tool in our toolbox!

Juan wrote back, after two days of thought, with helpful feedback:

The reason why I was dealing with this was to solve some integrals of rational expressions. I read both explanations very carefully. Great information! Here is what I got from them and what I am still missing:

First, a clarification: you wrote

2. The Fundamental Theorem of Algebra, the Factor Theorem and the Partial Fractions Theorem guarantee that any polynomial with complex coefficients can be reduced to simpler polynomials of degree not larger than two.

More precisely, the Fundamental Theorem of Algebra says that every polynomial p(x) with complex (which includes real) coefficients has a root or zero r among the complex numbers. The Factor Theorem says that (x-r) must be a factor of p(x), so that p(x) = (x-r)q(x), where q(x) is a polynomial of one lower degree. Applying the Fundamental Theorem to q(x) gives a complex root s of q(x), so that q(x) = (x-s)t(x) and then p(x) = (x-r)(x-s)t(x). Using induction, p(x) can be factored over the complex numbers into a product of n linear factors, where n is the degree of p(x). If all the coefficients of p(x) are real, then complex zeros of p(x) must occur in conjugate pairs, which allows p(x) to be written as a product of real linear factors and irreducible quadratic factors with real coefficients. If some of the zeros are repeated, p(x) can be written as a product of powers of real linear factors (x-r)k and powers of real irreducible quadratics (x2+ax+b)m.

The main point here is that the FTA itself says less than he said before; what he had stated is an implication from it.

The Partial Fractions Theorem has nothing to do with this fact. It just says that if p(x) is the denominator of a rational function, and p(x) has a factorization into the product of a constant A (the leading coefficient) times a product of powers of real linear factors (x-r)k and irreducible real quadratic factors (x2+αx+β)m, then the rational function can be written as a sum of rational functions of the form At/(x-r)t, where 1≤t≤k, when (x-r)k is the highest power of (x-r) in the factorization of p(x), and of the form (Asx+Bs) /(x2+αx+β)s, where 1≤s≤m where m is the highest power of the quadratic in the factorization of p(x). As Dr. Rick pointed out, the decomposition is only correct if these are the only types of denominators in the decomposition.

This is a fuller statement of the PFT.

Finding the other roots

Now for the questions:

1. Given that (x4-x3+x2-x+1) can’t be factored, not even using the Rational Roots Theorem, is it safe so say that the remaining roots must then be imaginary and the only way to find them is using tools beyond elementary algebra, such as Roots of Unity?

What’s correct is that the other roots in this case are imaginary. It is not correct that roots of unity provide the only way to find those other factors!

Let’s take a moment to finish this factorization by a elementary method, which is suggested by our past post

We want this to be an identity, making the two polynomials equal for all x; that requires that the coefficients be the same. So we can write four equations:$$a+c=-1\\b+d+ac=1\\ab+bc=-1\\bd=1$$

Now, shall we try to find partial fractions for Juan’s problem? At this point I strongly suspect that he made up the problem, because we usually assign problems that have reasonable answers, and this will not. Have I ever mentioned that most algebra problems you make up at random can’t be solved at all? Most of the rest have particularly ugly solutions!

I have made the effort, but it is not worth trying to show. Nevertheless, it is clear that it could be done.

2. About the Roots of Unity concept, is it taught at undergraduate level? I have taken algebra, pre-calculus, calculus I (derivatives) and calculus II (integrals). Never before heard about it. Given my current level of math, do you think I have the fundamentals needed to self teach it?

Roots of unity only come up because your polynomial is x5+1.

For example, here are the five fifth roots of unity (that is, of 1), on the complex plane: 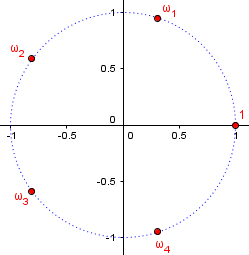 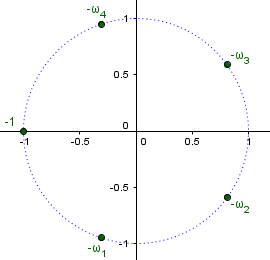 These can be found by taking the easy one, \(-1\), and multiplying by each of the fifth roots of unity.

How can we calculate them (apart from the sort of work we did above, which doesn’t work for higher roots?

and that complex multiplication is very simple in the polar form. If z = reiθ and w = seiφ, then

so that complex multiplication involves stretching (rs) and rotation (θ+φ).

Negate these, and you get just what I calculated the long (and exact) way above. In general, these can’t be calculated exactly.