I’m looking for past questions that led to deep discussions. This week, we have a case where a student realized he was doing algebra by rote, not thinking about what variables really mean. This realization was triggered by a step that many students stumble over, where parameters change their role. I have seen many calculus students struggle with this, so it deserves close examination.

The work is correct; Sam solved the system by substitution, and did it well. But then he stopped and thought about it, which is great:

Sam is overthinking; but the solution is not necessarily to back off and underthink! This is a wonderful question, because he wants to understand more deeply, and be able to think accurately.

I responded, starting with the fact that his work was correct:

First, we have to deal with the question,

“For example, in y = 5x and y = -3x + 2, you are assuming that y and x are the same value, and this allows you to then substitute or eliminate. (It would be very helpful if you could comment or help me with this statement I just made, for I never fully understood how you can substitute y or x values if the equations are different.)”

I answered, pointing out that his explanation was just right:

The slope … of what?

His big problem starts when he says,

“But how can you plot the lines here and see where they intersect? There is no y or x value, and you do not know m or b.”

“What I am trying to say is that the two equations

already have the same y-intercept and the same slope. They have different x-values, but the y-values correspond in a way that is proportional.”

He is focusing on the names of the variables; here, m and b are a slope and a y-intercept, but not of these lines!

At this point in the problem, we are just solving a system of equations for variables m and b. We would not normally graph the equations, but would just solve in the abstract. Sam’s problem is in confusing this with one representation of the system, as a pair of lines. To see it that way, we have to set aside the meaning of the variables and just graph with one variable (I chose m) on the horizontal axis, and the other (b) on the vertical axis. Here is the result: 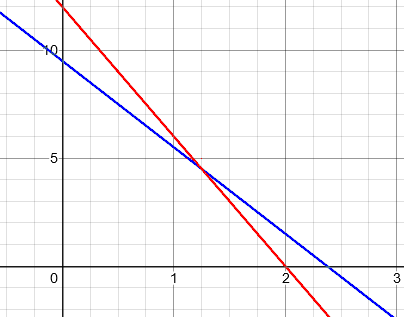 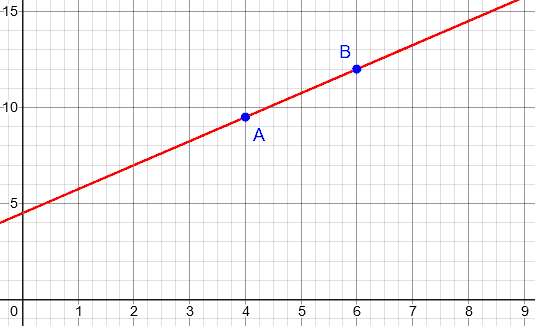 So Sam needs to avoid thinking of m and b as always meaning slope and y-intercept.

I replied, offering a different example in the hope of breaking the connection to m and b:

This is an essential point. A mathematical concept typically can be modeled in a number of different ways. We must not confuse the concept with one model. This is another aspect of the abstractness of mathematics.

So Sam has shown that he can choose a representation for a problem. Good!

Sam also recognized that the letters n and C played the roles commonly taken by x and y. The concept of a parameter may be the hardest here.

This takes us all the way through Sam’s work.

Here are graphs of several lines passing through (6, 12) at different slopes, showing how the y-intercept changes. If I increase the slope by 1, the intercept decreases by 6. 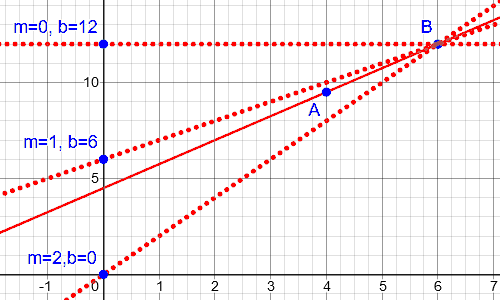 It did. He answered: