Last time, as part of our series on estimation, we looked at some numerical methods for solving equations approximately. I mentioned the Method of False Position, but when I looked for more detailed expositions in our archive, I realized that in a sense it is really two different things, and we primarily cover the form that is not a method of approximation. Today I will focus on two answers from the archive, one related to each aspect of the method, in order to dig more deeply into both.

This method goes back to the ancient Egyptians or Babylonians; the name comes from the fact that we start by supposing (positing) a solution (though we know it is false), and using the information obtained to get a new answer — which, for some (linear) problems, will in fact be the exact answer, but for others (non-linear) will just be a better approximation. In the latter form, it is similar to the Bisection Method I discussed last time, but rather than getting a mere “up or down” indication from the function, we have more information, so we can move faster.

The ancient form of the method (for linear problems) came up in this question from 2004:

This is a classic problem of the Egyptian type, though Lynne didn’t mention such a source; it may be a direct translation from an Egyptian original, or a problem from the 19th century (see below), which explains its awkward wording. If you think about it, you will realize that it is really a simple algebra problem, from our perspective. The hard part is that it is written in terms of a sum of fractions; this is the only way the Egyptians could write fractions, as their notation only allowed for “numerators” of 1, apart from a special case for 2/3 or 3/4. Today, we would just combine the fractions and multiply by the reciprocal. There is no need for a numerical approximation, and in fact this method quickly gives the exact answer for such a problem.

Both Lynne and Doctor Douglas appear to know False Position primarily as an approximation method, despite this being a classic problem for the linear form of the method. I added a reference to the following page, which I had written the previous year, about its (presumed) Egyptian origin and significance:

What we have used here is called “Simple False Position”, and applies specifically to problems of the form \(ax = b\) (direct proportion). In it, we make one guess, and adjust the guess proportionally to the error in the result. As I see it, what was done above could just as well be described as multiplying by a common denominator to simplify the equation, and then dividing by the remaining coefficient. If so, then it is not all that different from modern methods. Their main difficulty was the lack of notation, which forced them to say everything in words.

The more general method, used to solve equations of the form \(ax + b = c\), is called “Double False Position”, and is the precursor of the full approximation method we’ll look at below. In it, we make two guesses, and use a complicated formula to find the new “guess” lying between them, which for a linear equation will be the final answer. I’ll discuss this formula after we see it in an example of approximation.

The best discussion I find of this is in the following question from 2006, where Jacob essentially discovered the core of the method himself:

I love his original title for the question: “Wow! I have found it, now why does it work?” I think he is in a wonderful class.

I explained what he had done in terms of the graph:

I was not satisfied with the rough “graph” I’d made, so I sent a better one:

Now, as I said, what he did was a common way to make an estimate from a table (it’s still used in countries where tables are used for trigonometry or logarithms); Jacob just did it once, so it is not yet an iterative method. Let’s look a little deeper to see how this could be turned into (a) a formula for Double False Position, and then (b) a method for iterative approximation.

Ancient people (starting at least with the Chinese, Indian, and Islamic worlds, and, in fact, all the way into the 19th century!)  used this as a rote method for solving linear problems by using two guesses; this was called Double False Position, or just Double Position. (The word “position”, here, means something like “supposition”: we are twice “positing” a possible but false solution.) In my cursory examination of old books discussing this, I see some literally cross-multiplying (arranging the guesses x and the errors y at the ends of an X), some using something like our unsimplified formula instead. Some modified the rule when the two guesses were on the same side of the solution, rather than use signed numbers. Here is one example from 1827:

Pike’s System of Arithmetick Abridged: Designed to Facilitate the Study of the Science of Numbers, Comprehending the Most Perspicuous and Accurate Rules, Illustrated by Useful Examples : to which are Added Appropriate Questions, for the Examination of Scholars, and a Short System of Book-keeping 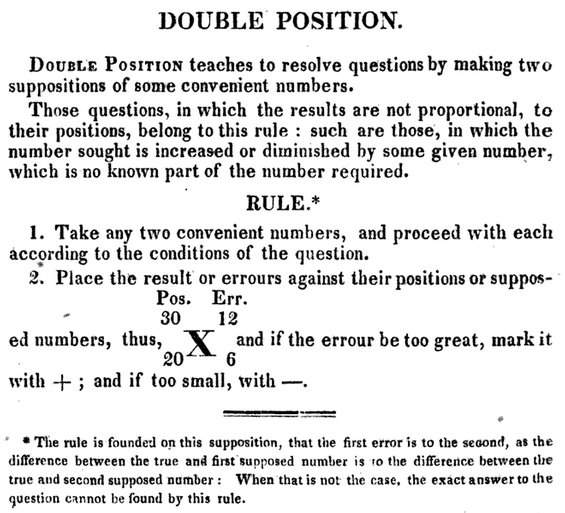 A course of mathematics, Charles Hutton 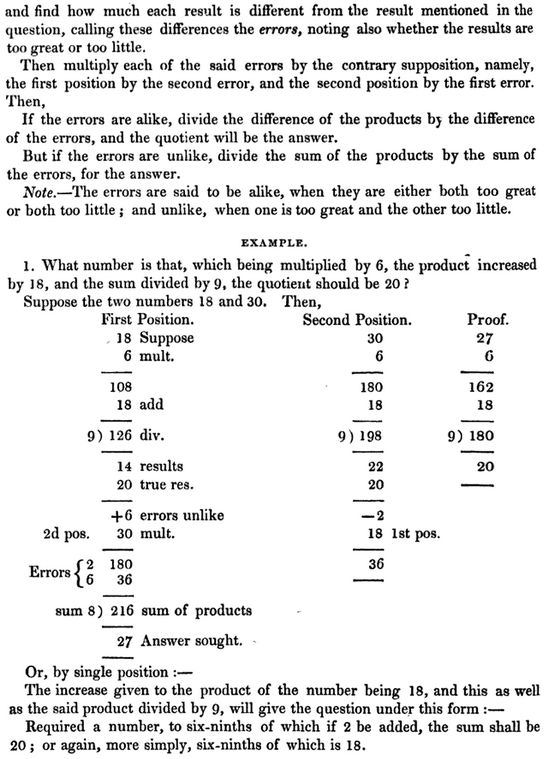 It seems incredible today that such a cumbersome method should have been commonly taught; but algebra was considered too advanced for most students. This is just arithmetic!

Again, these versions of the method apply specifically to linear problems, and will give an exact answer that can be checked. But if we apply it repeatedly to a non-linear problem, we will get a better approximation at each step. Let’s take Jacob’s example and do that.

His work, again, used the formula

This is, in essence, the method of False Position as used today as an approximation method. There are a number of variations on it.

Next week, I will discuss finding square roots by other methods that are more useful by hand.