Some topics are hard to find information about at a basic level, because they are usually dealt with in advanced math courses, and yet the basic ideas can be understood without all the trappings. That is the case for the Affine Tangent Cone, which involves tangents to an algebraic curve, which are studied in Algebraic Geometry. I myself am not familiar with the topic, but we are fortunate to have a variety of Math Doctors who know math well enough to enjoy explaining it at whatever level is needed. I’ll be learning some things as I edit this! (And I get to play with some fascinating graphs.)

What is an affine tangent cone?

The question came from Andy  in mid-January, who had been searching for accessible information about something he’d read:

We don’t know the context in which the subject arose; but some level of introduction was called for. What is an affine tangent cone, and how can it be used?

Given an algebraic curve f(x, y) = 0, if you want to investigate a possible singularity at the point (a, b) on the curve, it is easier to first move the point to the origin by replacing (x, y) with (x + a, y + b). We will assume that this has been done, and the point of interest is (0, 0), which is now on the curve.

Algebraic curves are defined, not, as we usually see in introductory algebra, as a function \(y=f(x)\), such as the polynomial function \(y=3x^3-2x-5\), but by a polynomial that may involve both variables on both sides, which can be rewritten with 0 on one side. Here are a couple examples of such curves that I found in MathWorld: 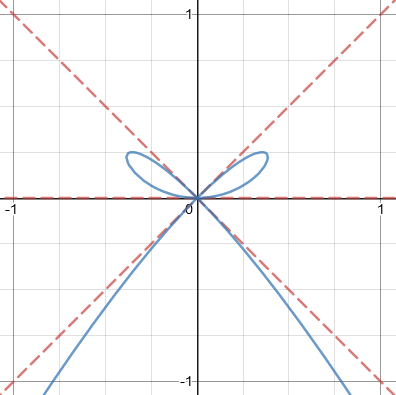 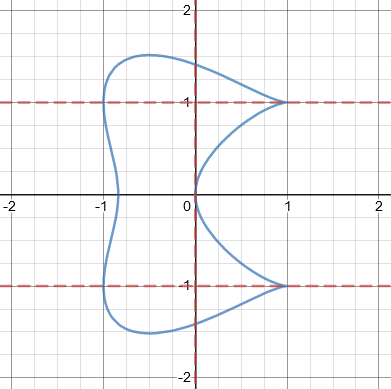 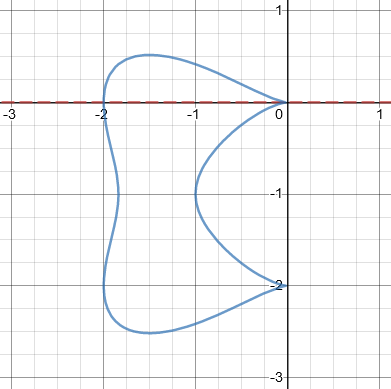 Cusps and self-intersections are two kinds of “singularities”.

You should then separate f(x, y) into homogeneous components, i.e., rewrite the equation by collecting together the terms with the same total degree. Note that there will be no constant term, since (0, 0) is on the curve.

The affine tangent cone is then the homogeneous component with the lowest degree. If this has degree 1, it is simply the equation of the tangent at (0, 0), and the point is not singular.

and the component of lowest degree is  x² – y², which gives the equation of the tangent cone. The corresponding variety consists of the two red lines y = ±x; these are the two tangents at the origin: 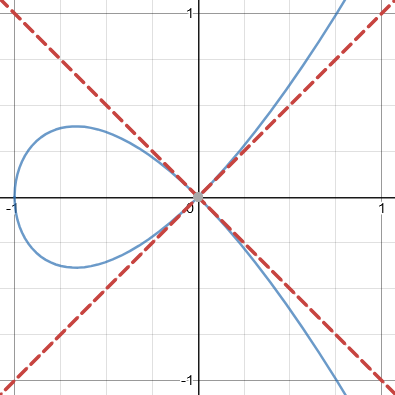 You may be wondering about the word “variety”. It’s just a word that covers curves, surfaces, and similar things of any dimension; by talking about algebraic varieties, we can talk about all those sorts of things at once. (You probably don’t want to read that link.)

In general, the number of tangents at a singular point is at most equal to the degree of the affine cone. “At most” is important, because you can have a concept of multiplicity. For example, the curve y² = x³ has a cusp at the origin: 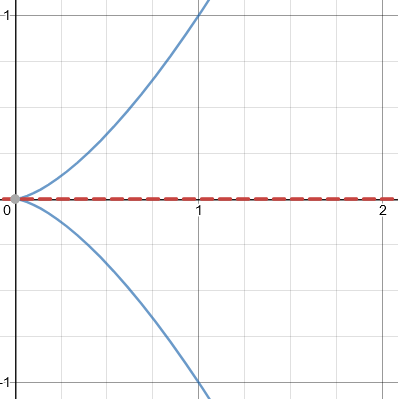 In this case, the affine tangent cone is y² = 0, which is simply the x-axis. You can consider this as a “double tangent”.

The name “tangent cone” comes from the fact that, since the equation is homogeneous by definition, if the point (a, b) is on the cone, then all points {(ka, kb) | k ∈ ℝ} are also on the cone.

So in this example, the two branches of the curve at the cusp share the same horizontal tangent, so although the degree is 2, there is only one tangent. Our shifted bicuspid above is similar.

You may have seen equations of literal cones; for example, the homogeneous equation \(z^2 = x^2+y^2\) represents a cone with its axis along the z-axis: 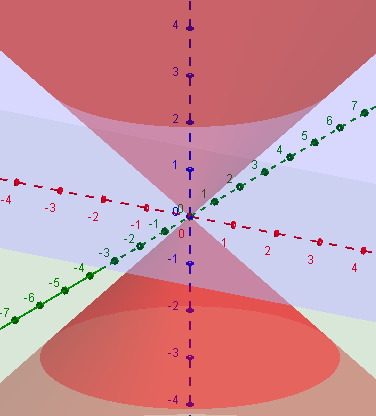 Filling in the details

Thank you for your answer!

Actually, I don’t understand well ‘the number of tangents at a singular point is at most equal to the degree of the affine cone.’

Could you explain this part in detail?

Let us start with the notations.

We have a curve given by a polynomial equation f(x, y) = 0, and that curve passes through the point (0, 0). We write the equation as: 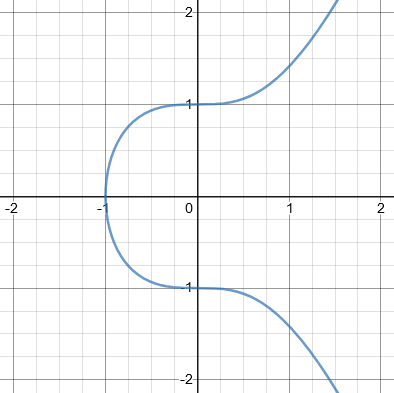 So we aren’t going to see that happen. The component \(g(x,y)\) will always have at least degree 1. 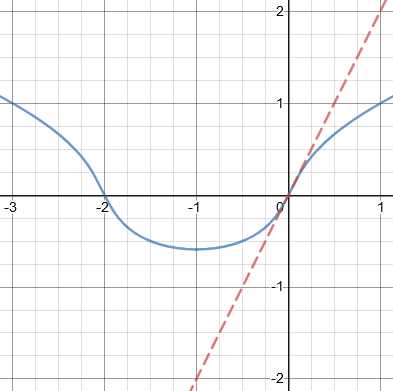 With one tangent, the origin here is not a singular point.

At most n tangents

If n > 1, we have a singular point, and there may be more than one tangent, or no tangent at all. Each tangent is described by a linear equation ax + by = 0, and (ax + by) is a factor of g(x, y). Obviously, if g(x, y) has degree n, it cannot have more than n linear factors: the number of tangent lines is at most n. This is what I meant with the statement in question.

This is like the fact that a polynomial equation may have any number of solutions up to its degree; a quadratic equation may have two solutions (corresponding to two distinct factors), or only 1 (if both factors are the same), or none (if it can’t be factored). 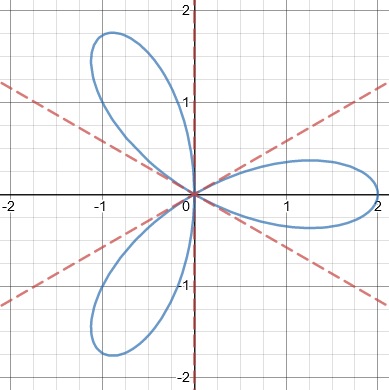 On the other hand, you can have fewer than n tangents. Two things can happen.

First, you can have repeated factors. Those factors correspond to a single tangent. This is what happened in the second example: we had g(x, y) = y², but the equation y² = 0 is equivalent to y = 0 (the x axis). In this case, g(x, y) has degree 2, but there is only one tangent. In some sense, that tangent is counted twice.

Here is that second graph:

Fewer than n tangents: no factors

It may also happen that g(x, y) does not factor completely into linear factors. The irreducible factors of degree greater than 1 do not describe tangents. Consider, for example, the equation f(x, y) = x² + y² – y³: 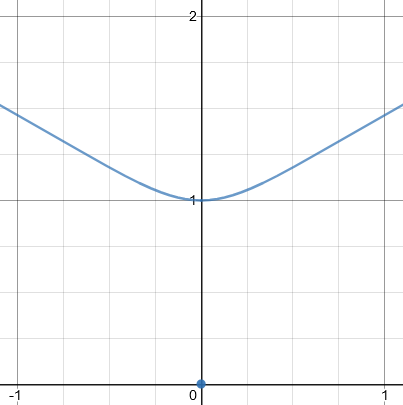 Although this is not immediately obvious, the point (0, 0) belongs to the curve, as f(0, 0) = 0. This is an isolated point. In this case, the equation of the tangent cone is g(x, y) = x² + y² = 0, but the only solution of that equation is the single point x = y = 0. There are no tangents at the isolated point, which agrees with the intuition.

Note that, although x² + y² is irreducible over ℝ, over the complex numbers ℂ, we have the factorization x² + y² = (x + iy)(x – iy). In this case, you could say that there are two imaginary tangents; these are, of course, not visible on the graph.

You can also have both problems present in the same curve.

Andy was now satisfied. Clearly there is a lot more that could be said – that whole course in algebraic geometry that I never took, for example, not to mention that we haven’t proved anything here. But I hope this has whetted someone’s appetite for some graphing that goes far beyond the parabolas you learn in algebra class. 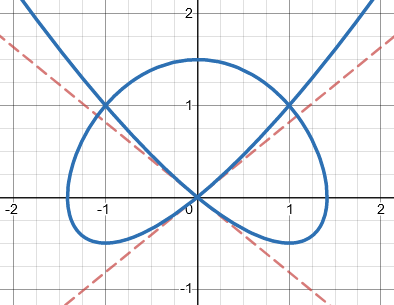 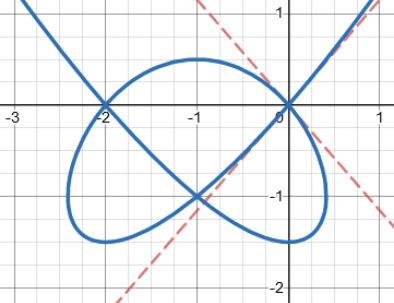 1 thought on “Tangents of an Algebraic Curve”