A popular kind of question in combinatorics is to count the number of paths between two points in a grid (following simple constraints). This can be done by very different methods at different levels. We’ll look at several problems of this type, starting with the simplest.

Paths in a small square

We’ll start with a very simple problem; this comes from Sarah in 1999:

The problem as stated is a little vague as to where A and B are, and what the rules are. I answered, first suggesting the usual meaning:

I’ll show another interpretation later; but every problem in this post will follow this rule of going only in one direction on each set of lines, and will have the start and end at opposite points.

We will be looking for efficient ways to count paths in larger grids; but this one is small enough that it makes sense just to list all possible paths, and doing so is a good way to better understand the meaning of the problem, which was my goal. 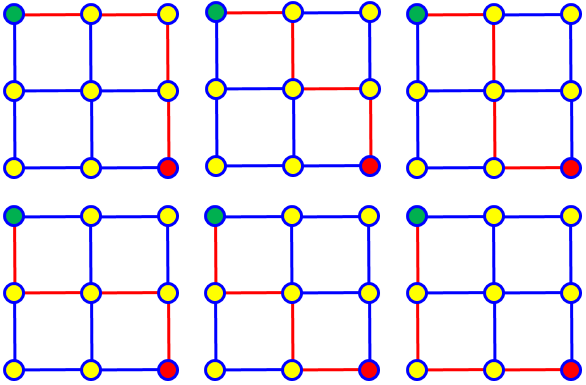 Here are all the additional paths if we remove the one-way restriction, but don’t allow a path to cross itself: 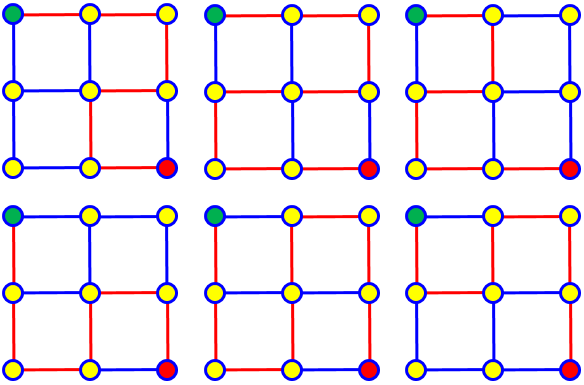 I didn’t honestly expect such a rule, but wanted to make it clear that the rules were not self-evident.

Now, what if we don’t want to list the paths (as we will not, in larger problems to come)? 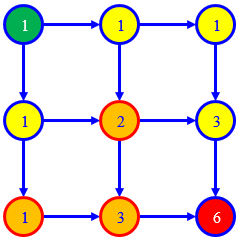 In the next answer, we’ll see another, more “mathematical”, way to calculate this answer of 6.

Paths in a larger rectangle: count ways to arrange letters

This is the same question, with the rules stated and a larger grid: 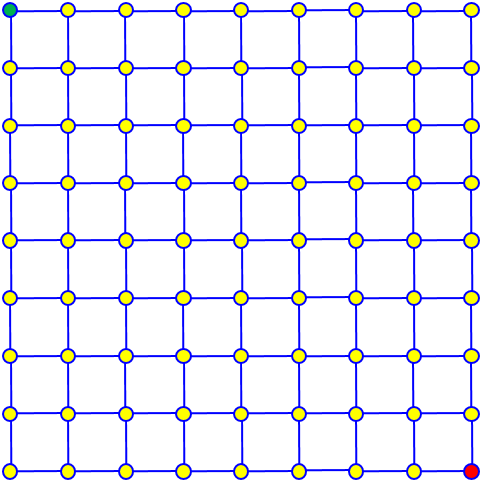 Here is our practice grid: 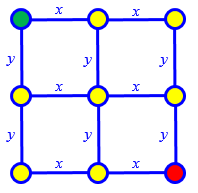 The first path listed, xxyy, corresponds to the path 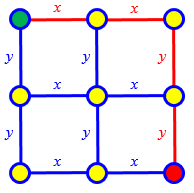 Observe that what we’ve done so far is to find a useful notation, namely lists of letters representing directions, rather than my lists of points. This can be described as making an equivalent model of the problem – and that model happens to be one that is familiar to many people.

The next question is from Tracy in 2002, with a more interesting grid:

Here is the grid: 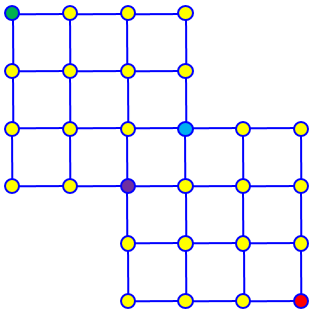 The two marked points are a bottleneck, a narrow place that all paths go through.

Two of us answered with different methods.

In effect, he has split the grid at points C and D, so we have two separate problems: 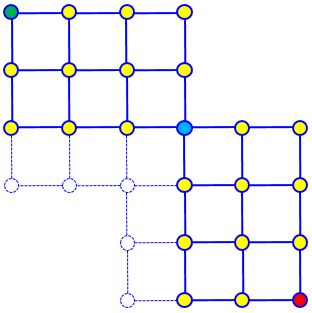 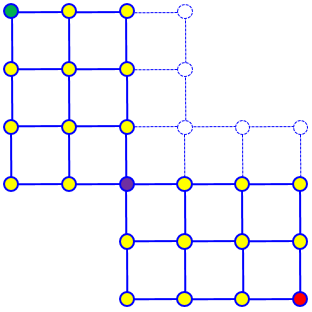 Within each part of each case, he is thinking of arranging the letters in a word, either HHHVV or HHVVV.

This divide-and-conquer approach allows us to use the combinations method four times. But we’ll see that this is still a relatively easy problem of its type, due to symmetry.

I had been writing an answer at the same time. Since we didn’t know what level of knowledge Tracy had, I suggested the vertex-labeling method, in addition to clarifying the rules:

Some people call this the Pascal’s Triangle method, because we are adding numbers in the same way we do there. And the use of combinations (binomial coefficients) to calculate the same triangle ties this right back to what Doctor Anthony did. Our two approaches are ultimately two ways to do the same thing.

I didn’t actually complete my method past the “bottleneck” of points C and D; I’ll do that in a new problem below.

Tracy quickly wrote back, wisely wondering what to do when there’s no symmetry:

This takes more thought, as the link between the two parts is wider. In effect, he is cutting the grid at the two lines and one point I colored in red above.

Here is how he is dividing the grid: 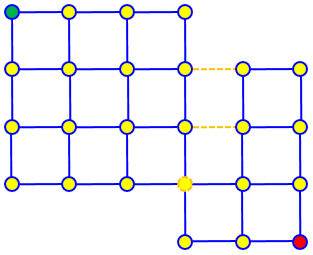 Here are the three cases: 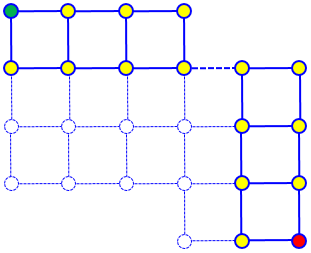 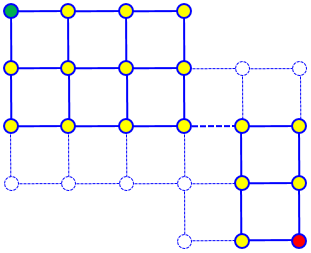 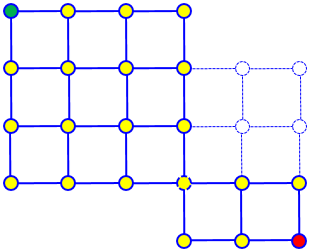 I wrote the next day:

I got the same answer.

Now, in the symmetrical grid I handled the second rectangle backward, counting from B back to C and D. Could I do that here?

The addends should look familiar!

A similar question came from Jeremy, later in 2002:

We can guess that “factorials” to him means “combinatorics” in general; and the Pascal’s Triangle method would be labeling points.

We’ll use this subtractive method later, for two simpler problems.

He ends up using a bottleneck method:

Because these three points are not above one another, as in that last example, we just have to “snip” at those points rather than along lines.

The answer from Doctor Ricky is one of several we have omitted; it involved a simple rectangle, and showed the approach of counting combinations of horizontal and vertical moves. I answered, referring to the long discussion above:

I don’t know whether Anuj invented this idea alone (perhaps because the grid is so close to a larger rectangle), or it was suggested. But it was a very good idea. 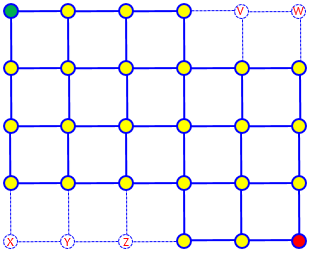