Here and next week, we’ll look at a collection of word problems we have seen that involve the Fibonacci sequence or its relatives, sometimes on the surface, other times only deep down. The first set (here) are direct representations of Fibonacci, while the second set will be considerably deeper.

Here is a representation of the problem:

Here are three of the many ways to lay the bricks:

On the surface, this is a combinatorics question, counting ways to do something; and we might approach it with permutations or combinations. In fact, we’ll be doing that for one of these problems later. But here, we’ll be finding a pattern, just as Dawn suggested.

This is a very important step of problem solving, which I have elsewhere called the exploratory phase. Sometimes it only builds our understanding of the problem, but in others (as in inductive proofs) it becomes part of the solution.

After a first vertical brick, we have a 2×2 to fill in, which we already know we can do in 2 ways:

After a first horizontal brick, we have to add another horizontal to match it, and then we have a 2×1 to fill in, which we already know we can do in 1 way:

Here is what we get if we repeat this procedure another time: 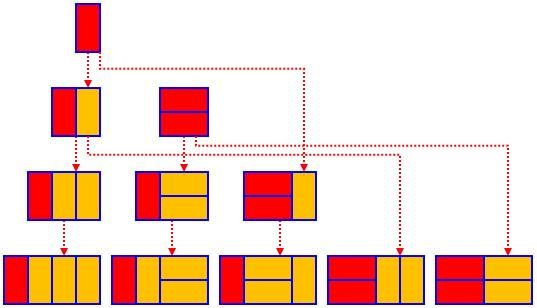 For each row, we can either start with one vertical brick (red) and follow it (orange) with any possibility from the previous row, or start with two horizontal bricks and follow with any possibility from the second row up. This give the recursion \(A_N=A_{N-1}+A_{N-2}\). Unlike the Fibonacci sequence, however, this starts with \(A_1=1, A_2=2\). The answer will just be a renumbered Fibonacci sequence.

This time, the problem was given together with a hint to use Fibonacci; but it’s not enough just to assume that is valid. We need to understand. Good for Ashley!

Doctor Floor answered, with an approach only slightly different than mine:

I didn’t point out above that this is an example of a sometimes-surprising problem-solving technique: Solve a specific problem by generalizing it! We were asked for the specific case of 15 feet, but we make it doable by first generalizing it to N feet so we can find a formula. Then, in effect we work on that by induction, working step by step until we see what happens for all N.

This says essentially what I did: You can make a new walk by starting with a two-foot unit or a one-foot unit, and then build a walk you already know how to make. But when I read it, I initially saw it as working backward, and that can be interesting, too:

This approach makes the recursion look just a little different: 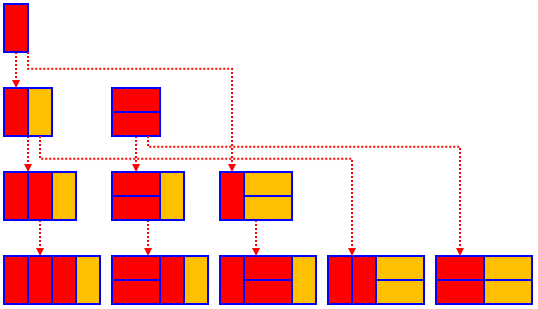 So what’s the answer? Here is a table showing the answers to both the 20-foot and the 15-foot questions:

Although we don’t have a direct formula for the answers, it took only a few additions to get them. If the numbers were larger, we might want to use the explicit formula we’ve seen elsewhere (with a calculator, since that requires powers of phi); we’ll have reason to do that for the next problem!

We can visualize the problem like this, showing one way to climb ten steps: 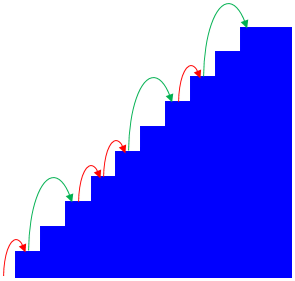 We can picture that same example as a series of single- and double-steps in a top view, like this:

Matt has some interesting thoughts. I think he meant that any number of “2-steps” will climb an even number of steps, so only the number of “1-steps” is restricted. And the idea of having two choices suggests he is thinking in terms of combinatorics.

That is, we can either take 10 single steps (that’s one way), or 8 single steps and 1 double step (arranged in various ways), and so on; so we can count 6 cases and add the resulting 6 numbers to get the total number of ways. And each of those numbers can be found as a combination:

If you know about Pascal’s triangle, this forms an interesting pattern; we’ll later be seeing a proof that this pattern always yields … the Fibonacci numbers! 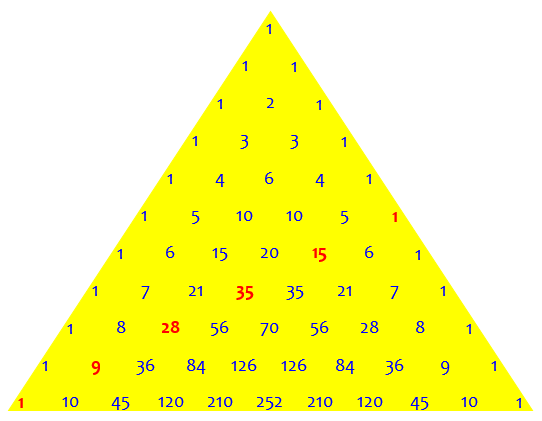 (An interesting side problem would be: for N steps, how many combinations will we need to add?)

Yes, there is a clever way …

Let Fibonacci do it

Doctor Douglas took it the next step:

Where Doctor Robert looked at a single middle-sized smaller example, Doctor Douglas is doing as we did in the previous problems, starting with the smallest examples and looking for a pattern. Both can be good ways to approach a problem; sometimes you need to try different ways to see what works best. 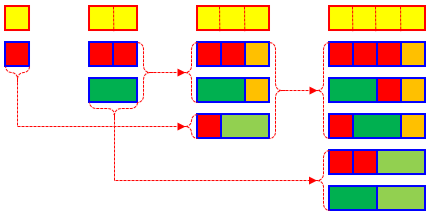 This would still take 100 additions, which would be tiring (but easy on a spreadsheet … if it could hold the numbers!). Let’s use the shortcut formula we saw in The Golden Ratio and Fibonacci, by rounding: $$F_n = round\left(\frac{\phi^n}{\sqrt{5}}\right)\text{, for all }n \ge 0$$

Matt didn’t show his answer, but since he has learned about recurrence relations, there’s a good chance he did something like what we just did. Messy indeed!

A phone chain: geometric, or Fibonacci?

I want to close with a problem from 1998 with two interpretations:

The table they are making assumes a straightforward interpretation that leads to a geometric growth pattern, for which there is a simple formula. But what if we interpret it a little differently?

As a geometric sequence

So the number of new people called in the nth pair of minutes is \(2^n\).

This is the sum of a geometric series. Our table, up to at least 55 people called, looks like this: 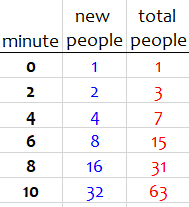 But though the problem is solvable in this interpretation (at least if Leah has learned about logs), there’s something we haven’t taken into account:

As a Fibonacci sequence

You may already have observed that the numbers in the “calls per minute” column look like the Fibonacci sequence; so the “total calls” column is the sum of the Fibonacci series, which we looked at in Generalizing and Summing the Fibonacci Sequence.

He left open the question of proving that this is what it looks like, and I’ll leave it open too. But assuming it is (and it is), the formula for the total calls after n minutes is \(F_{n+2}-1\). Here is a table: 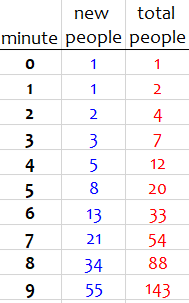 There is a problem, though: There is no easy way to invert the formula and find the number of minutes to reach n people. So I can’t say for sure which interpretation the teacher intended!

Next week, we’ll look at a couple much more challenging twists on Fibonacci problems.