We’re looking at the Fibonacci sequence, and have seen connections to a number called phi (φ or \(\phi\)), commonly called the Golden Ratio. I want to look at some geometrical connections and other interesting facts about this number before we get back to the Fibonacci numbers themselves and some inductive proofs involving them.

The Golden Rectangle and Fibonacci

The golden ratio, \(\phi\), which goes back at least to ancient Greece, has also been called the “golden mean” (because it’s a special “middle”), the “golden section” (because it is a special way of “cutting” a segment), the “divine proportion” (because it was considered perfect), and “extreme and mean ratio” (as an explicit description). Specifically, it is the ratio between two parts a and b of a segment such that it is also the ratio between the whole and one of the parts: $$\frac{a}{b}=\frac{a+b}{a}$$

Euclid defined it this way:

A straight line is said to have been cut in extreme and mean ratio when, as the whole line is to the greater segment, so is the greater to the less.

Here is a “golden rectangle”, whose sides are in the golden ratio: 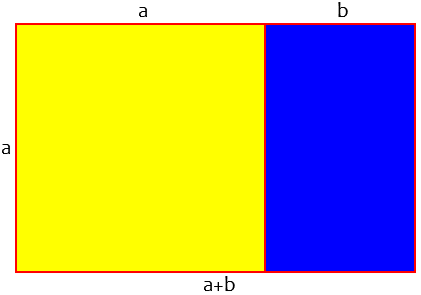 We have divided the horizontal line into parts a and b so that the rectangles with ratios a:b [blue] and (a+b):a [whole] are similar.

We’ll start with an anonymous question from 1996:

(By the way, it is common to use the word “series”, which properly refers to an infinite sum, instead of “sequence”, which is the proper term for a mere list of numbers. We don’t always correct that! The Fibonacci sequence is also often just called “the Fibonacci numbers”.)

We’ve already seen, as this student has, that the ratio of Fibonacci numbers approaches \(\phi\); we’ve even seen a proof, and will see another later. But is there a bigger way to understand it? Doctor Ethan answered:

Here are several repetitions of the process: 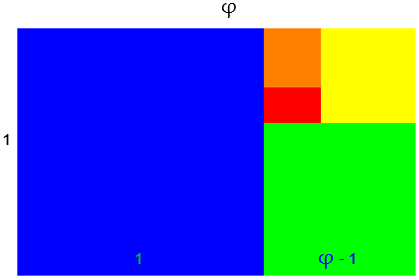 The red rectangle is similar to the original whole.

If we started with my red rectangle above and added squares to the longer side, we would get the same figure, just in reverse order. What if, instead of starting with a golden rectangle, we started with a square? Here is the resulting figure: 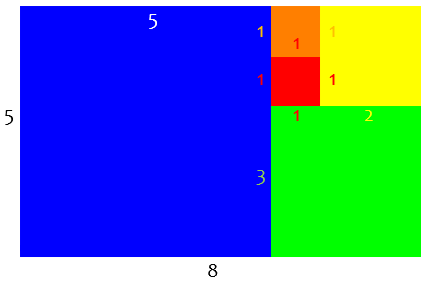 While we’re looking at rectangles, suppose we show the circular arcs I drew with a compass to find the new length at each step: 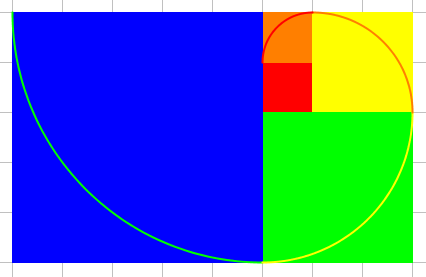 This Fibonacci spiral is similar to one called the golden spiral, but is not identical.

Here is another 1996 question:

Keep in mind that it wasn’t called the golden ratio or golden section yet! And there are a lot of myths about this number as well; its use in ancient architecture probably wasn’t quite what many people think, and it is “found” in many places in nature where it really doesn’t exist.

Euclid’s construction is found in Book II Prop 11 (as just stated), and also in Book VI Prop 30 (described as “extreme and mean ratio”). Here is the figure from the former:

The pink square AFGH has the same area as the rectangle on the right, BDKH. Observe that the ratio Doctor Jerry stated is what we have called \(\Phi=\frac{1}{\phi}\). For an aside on that, continue:

Two phi‘s for the price of one?

A student in 2001 asked about this matter of two different closely related ratios:

I’ve been using the upper case (\(\Phi\)) and lower case (\(\phi\)) forms the other way around, which is perhaps more standard. But as I said, it doesn’t make much difference.

It gets confusing after a while, doesn’t it?

Here is a question from 1999 about the Golden Triangle:

What makes this special? And can you see the connection to the golden ratio?

Now, what can we say about the side lengths? The fact that triangles BAD and ADC are isosceles lets us mark three segments equal:

And since triangles BAD and BCA have the same base angles, they are similar and we can write a familiar proportion: 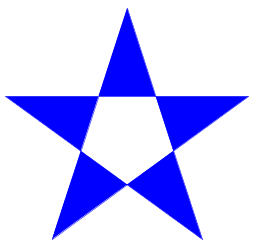 This is true simply because the angles add up right. And this connection to the pentagon may be the main reason Euclid found this ratio worth exploring.

More on the golden triangle

A student in 2001 had a wrong impression of the meaning of the name:

Golden ratio as a limit

Let’s get back to Fibonacci, with this question from 1998:

We’ve previously touched on this, but there’s more to be said. Doctor Rob replied to Karen:

This, of course, is the definition of the Fibonacci sequence, expressed in terms of ratios.

The equation here is the equation that defined the golden ratio (and its negative reciprocal).

More work would be needed to properly prove that the sequence does converge, to satisfy a mathematician, but convergence is obvious for practical purposes. (Convergence means that the numbers actually approach some limit at all.)

Alternatively, it can be proved using what we saw last week:

The first term is alternately just below and just above the value of the term, so we can just round it and ignore the second term.

Golden ratio as a continued fraction

Another amazing representation of phi is the subject of this 1997 question:

This becomes the now-familiar equation \(x^2-x-1=0\), whose solutions are \(\phi\) and \(1-\phi\); since the convergents are all positive, their limit (assuming it exists) must be positive, so we have our answer: the continued faction is, in fact, the golden ratio.

But there’s more! We can also use a continued square root:

Anything infinite can be misleading!

2 thoughts on “The Golden Ratio and Fibonacci”