Continuing our look at the Fibonacci sequence, we’ll extend the idea to “generalized Fibonacci sequences” (with different starting numbers), and see that the ratio of consecutive terms is the same in general as in the usual special case. Then we’ll look at the sum of terms of both the special and general sequence, turning it into a series. This turns out to be as simple as you could imagine!

Recall that the Fibonacci sequence is defined by specifying the first two terms as \(F_1=1\) and \(F_2=1\), together with the recursion formula \(F_{n+1}=F_n+F_{n-1}\). We have seen how to use this definition in various kinds of proofs, and also how to find an explicit formula for the nth term, and that the ratio between successive terms approaches the golden ratio, \(\phi\), in the limit.

Similar questions can be raised about any sequence that has the same recursion as the Fibonacci sequence, but starts with a different pair of numbers. That is the subject of a question from 2002: 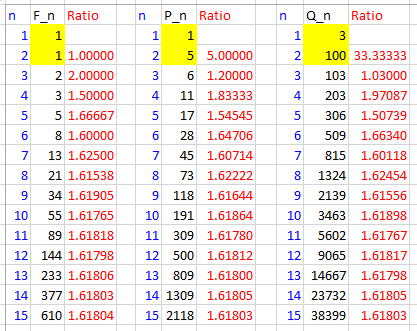 The first column is Fibonacci proper, starting with 1, 1; these are the numbers we call the Fibonacci numbers. The second starts with 1, 5 (which we’ll be seeing later), and the third, just to be very different, starts with 3, 100. The ratios in each case rapidly converge toward 1.618034…, which is \(\phi\).

In other words, is it possible for a sequence with this recursion to also be a geometric sequence? That’s not the first question I’d think to ask about generalized Fibonacci sequences;  but it turns out to be interesting:

Only these two numbers can work as the common ratio. We could actually start the sequence with any number we like (including 1), so there are many such geometric “Fibonacci” sequences (which would be multiples of these); but taking the sequences as \(A_n = \phi^n\) and \(B_n = (1-\phi)^n\) will keep the formulas simple.

This is the same reasoning we used before for the limit of the Fibonacci sequence proper, at the end of The Golden Ratio and Fibonacci. And if it turns out that \(a=0\), then the limit is zero rather than \(\phi\).

We’ll be seeing more on the generalized Fibonacci sequence below!

Edward has been trying to guess at a formula; I tried fitting the sequence to a quartic polynomial using Excel, which did fairly well for the first 15 terms as in my table above, but not exact: 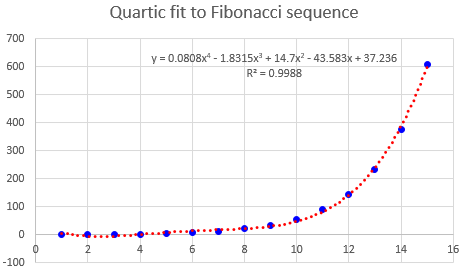 If I plotted more Fibonacci numbers with the same polynomial, they would rapidly diverge – because the Fibonacci sequence is closely related to exponential functions (geometric sequence) as we’ve already seen, and therefore grows faster than any polynomial.

Doctor Mitteldorf answered first, with a hint and a challenge:

We’ve already seen such a formula both “discovered” and proved; this version is different because, for some reason, he chose to start with 1 and 2 rather than 1 and 1. (You might like to try obtaining the formula using the method above for the generalized sequence!)

Then Doctor Floor, writing at the same time, gave a fuller answer:

This, of course, is the usual Binet formula for the sequence starting with 1, 1, which is the difference of two geometric series.

After a bit of fraction work and recognizing the Binet formula coming back to us, the result is amazingly simple – not a polynomial in n, but one less than a subsequent term in the sequence.

by the recursion. That was easy!

Our final question (from 2003) combines these ideas, summing a generalized series.

Do you recognize that, though the name wasn’t used, this is about the generalized Fibonacci sequence, starting with any two numbers a and b? Will it be as simple as for the standard sequence?

This is a less formal way to do the same thing we did in the recursion earlier. Just imagine crossing off both a[30]’s, then both a[29]’s, and so on down to the a[3]’s. What’s left?

This is exactly equivalent to the standard case above.

1 thought on “Generalizing and Summing the Fibonacci Sequence”