Last week we looked at several basic word problems for which the Fibonacci sequence is part of the solution. Now we’ll look at two problem that take longer to explain: a variation on the rabbit story, and an amazing reverse puzzle.

Those aren’t the Fibonacci rabbits; there’s a lot more going on here. But might it still be solved with the same sort of thinking?

A Fibonacci-like recursion … or not?

Doctor Rob answered briefly, perhaps assuming the problem would be assigned to a student experienced with such problems:

There is a problem here, which will become more apparent as we continue: Doctor Rob has evidently misread the problem, which is not really a Fibonacci-type problem. Before we continue, let me deal with the real problem as given, and then we can let Doctor Rob have fun with the far more interesting problem he sees.

Here is what this looks like “now” and at 9 weeks:

(I’ve shown only the females, so these numbers, 1, 5, 21, are doubled for the actual numbers. Red mice are no longer breeding.)

But let’s let the mothers keep breeding (more like real mice) and see what happens!

One of the difficulties of helping students who only state a problem without showing any work or giving any background, is that we can’t sure what math they know, so we can easily under- or over-estimate their abilities.

To which Doctor Rob answered,

It’s interesting that he starts with negative times! It makes sense, because the story started in the middle of the action, with the birth of a new generation; if we are going to let the mother continue giving birth, it is most natural to start with her birth.

My understanding is that Doctor Rob is assuming that the mother breeds again immediately after giving birth, so that 3 weeks after one birth of 8, while that generation is still maturing, another 8 are born.

Here is a picture of the first few generations: 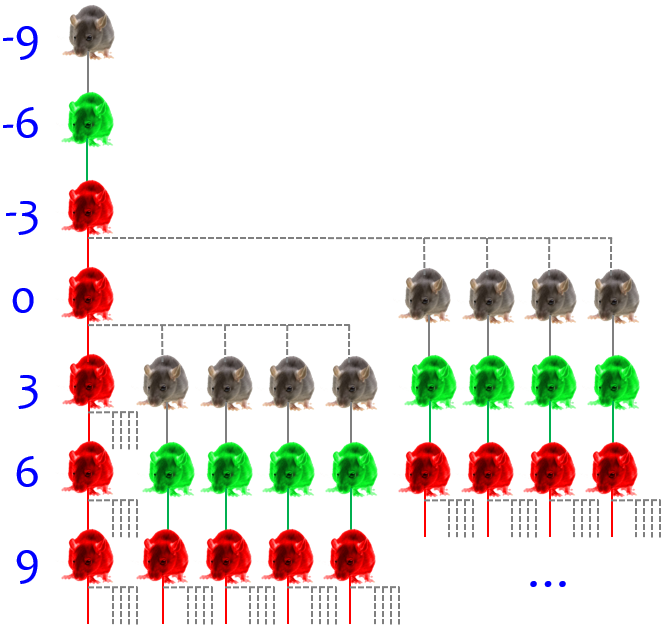 Again I’m showing only the females for simplicity, and omitted many newborns, so the numbers shown or implied (1, 1, 1, 5, 9, 13, …) have to be doubled to get the total number. Natural color is a newborn, green is immature (not yet breeding), and red is mature and breeding, so that it has babies in the next line. Rows are 3 weeks apart; row 0 is “now”, so the last line (partially shown) is 9 weeks from now. We need to go another three lines to week 18.

The facts of life

Here he states his understanding that mice continue having litters after the first one, which I think was denied in the problem, though I could be wrong. (That’s where I would ask the teacher!)

(I started from the Whiskers’ and Oscarella’s birth, so I started with 2, 2, 2, and then the recursion took over. I also went beyond the official ending point at 18 weeks, out of curiosity.)

We could also make a table listing each maturity level (newborn, immature = 3 weeks, and mature = 6 weeks), with each column coming from the previous row of the previous column, adding to the existing total of mature mice, and newborns coming from existing mature mice: 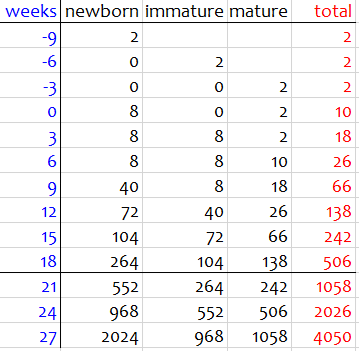 We could do more, such as finding an explicit formula, or seeing why it seems to settle down to approximately doubling; but I’ll leave it here.

The other problem for today, from 2002, raised the bar considerably, even though it is still at the elementary level:

The Fibonacci recursion is explicitly stated this time; but we need two specific values to build up a complete sequence, and we are only given one, namely last year’s price.

I answered, allowing myself to give a complete answer in part because I was teaching the father, who could then teach the daughter in our preferred interactive style, and also because I suspected my method would not be appropriate for the child anyway:

Interestingly, my random choice of 100 above was not far off; but we couldn’t tell, because a small change can have a big effect! But this final step was the same as the check I did there for practice. (You may also notice that we could have been told it’s been increasing over the last 8 years.)

Doing it by trial and error

Since, as I pointed out, a small change in our guess (for this year’s price) results in large changes in the results (7 years ago), this is not the sort of trial and error where we can make one guess and jump right to the final answer. We don’t know ahead of time how much to change our guesses. All we can do is try things and learn.

That would be part of the reason I reversed my suggestion, and said to start with the price 7 years ago and see what we get for last year’s price, hoping for 60 cents. The hard part of doing it that way, however, is that we have to start with a pair of numbers (first two years) rather than a single number (this year). I doubt that I tried any actual trial and error at the time, so I gave it a try now (ignoring what I know about the answer!). Rather than do all the arithmetic myself, I used Excel, putting one guess at a time in the top two rows and making new guesses based on the results at the bottom.

First, here is what I found for the method I recommended, working forward:

I started with the smallest possible first two prices, 1 and 2, and saw that the year 7 price was too low, 21. Not knowing how fast to change numbers, I just increased the second price 1 cent at a time and watched the year 7 price increase – interestingly, it increased by 8 each time. (Maybe there’s a pattern there worth exploring …) Once that passed 60 (61, bold), I went back and increased the year 1 price to 2, repeating the search pattern by increasing the year 2 price by 1; again the year 7 price increased by 8, so I might have made a bold leap and guessed that it would continue 34, 42, 50, 58, 66, and again overshoot the goal. I would have just checked that last case (2, 7) to confirm my hunch. But that wouldn’t save a lot of work, and would cost me some uncertainty – so even doing it by hand, I might have continued just as I did.

Then I moved the first price up to 3, and even more quickly passed 60; and when I made it 4, my first try worked (red).

But now we have the usual difficulty with trial and error methods: Can we be sure there isn’t another solution, so the correct answer would be, “We can’t know for sure”? I’d be more sure if I continued and tried (5, 6).

This approach might actually be appropriate for an even younger student, as it gives plenty of practice with small additions, which isn’t too important for sixth grade; but the problem-solving aspect might need the greater experience she has.

Now, how about starting as I did with the present price, working backward over 7 years? Here is my work with that method:

Here I started with the smallest possible price for this year, 61. (It couldn’t decrease this year, because then the price in year 6 would have been negative.) I saw that there would be a decrease in price (bold) as recently as year 6, so I’m nowhere near the solution. Rather than increase 1 by 1, I took a little leap to 65 and found there wasn’t much change, so I leaped to 70, 80, 90 and saw the week 5 amount decrease steadily until there was no change from week 5 to 6. With that, I decided to be more careful, increasing only by 1; that brought a dramatic change already, but after that there wasn’t much change, so I made a small jump to 95, saw what I expected, and crept slowly upward until I reached the goal at 97. But the change there was so dramatic, I wondered if 98 might also be a solution; it wasn’t. Just to make sure, I continued for a couple more steps and saw it get worse and worse. It looks like 97 is the only answer, so I can say with (near) confidence that this year’s price will be 97 cents. (And that is, of course, what we found more quickly and definitively by algebra.)

So the problem is entirely solvable by trial and error, and even in more than one way. But algebra was much more satisfying!