The term “exponential” has gone viral, so to speak. Do we all know what it means? In the next few posts I’ll look at answers we’ve given to questions about exponential growth and related concepts, some of them about the spread of diseases or rumors. (Disclaimer: I will be writing about the basic math, not about the SARS2 virus itself or about complex models of its spread, so nothing here is meant to analyze reality.)

Among the places I’ve seen the word “exponential” lately is this viral cartoon I ran across last week; in the version I first saw, someone had replaced “Understanding graphs” with “Exponential functions”, which made it more appropriate but less accurate, as not all the graphs shown are exponential: 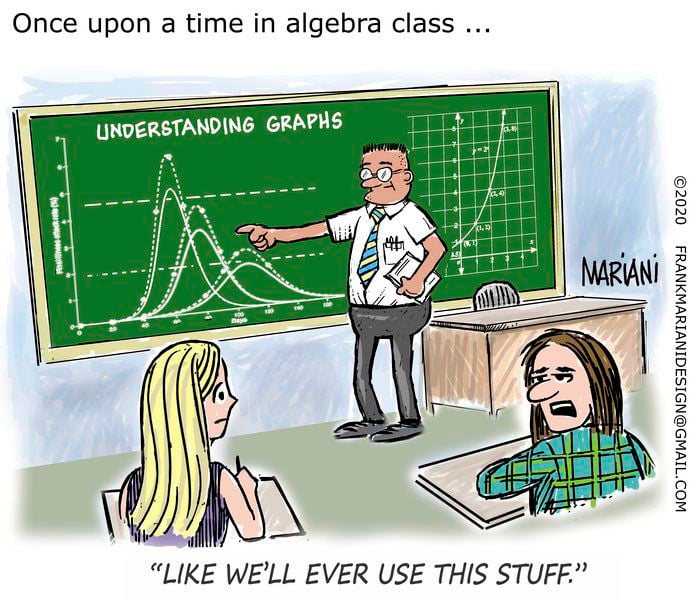 I got the (presumably original, and PG) version I show here from this article, which happens to come from my own area. (To give full credit to the artist, he can be found here.) In this series, we’ll look at both graphs shown (more or less) and other related ideas.

What is exponential growth?

Here is an introductory question from 2006:

Doctor Ian answered, starting with the idea of growth in general, and the simplest kind, linear growth:

Here is a graph of this function, showing how the increase is always the same: 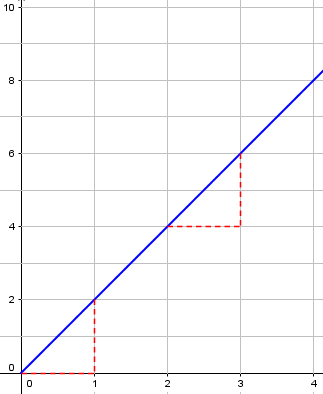 Linear growth happens when something changes at a constant rate – maybe pouring water into your glass, or a plant growing.

Technically, even a linear function is a polynomial; but a higher-order polynomial like this increases more rapidly – here, quadratic growth. Here is a graph of the example, showing that the increase from one point to the next increases as we go: 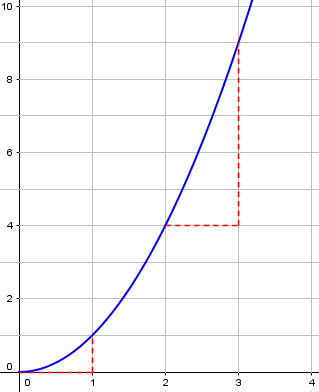 In this case, successive increases are 1, 3, 5, and so on – the increases increase at a steady rate. We could also have cubic growth, or more. But even that is not yet exponential!

Polynomial growth happens when things interact – say, the number of phone calls possible among N people, as the population increases, because each of the N people can talk to each of the other people. 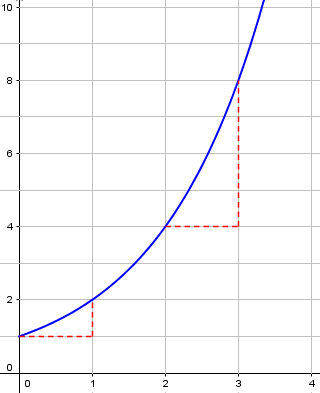 Exponential growth happens when things multiply repeatedly, as when each person can spread a rumor, or a disease, to several other people at a time.

Now the increase is increasing even faster: 1, 2, 4, doubling the increase each time, just as the function itself does. 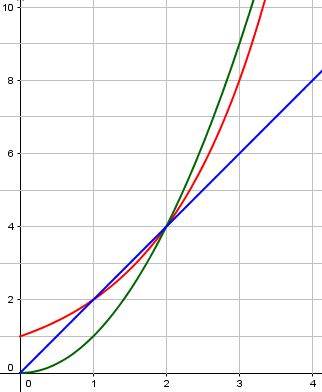 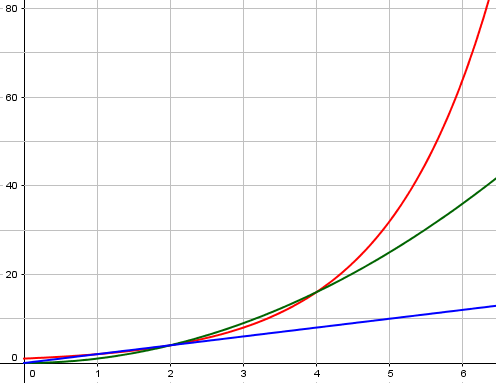 True exponential growth, by the way, typically can’t last long, because the numbers quickly go beyond anything possible. We’ll be discussing that next time.

This is the reason for the mention of “true” exponential growth – as opposed to figurative exponential growth. But I should mention a fourth possibility: The person is giving an approximation that is valid only in the short run.

A more specific question was answered in 2003:

Christina is confusing the two types of growth.

This kind of growth might conceivably occur if only the first 5 kept producing more beetles, 2 each every month, and the new beetles did nothing. When the cause of growth stays constant, so that the rate is constant, you get linear growth. But that’s not how beetles took over the world!

With exponential growth, the more there are, the more will be produced. In this example (which is not the one in Christina’s problem), each beetle would produce one more each month, so they double.

Now we’d like to make a formula for the number after x months. One way to do that is to do some specific calculations, and look for a pattern in what we are doing.

For a different example of exponential growth (Moore’s Law), see:

The algebraic approach to exponential growth properly works for a discrete problem (whole number time intervals and multipliers). For a sound basis for continuous growth we turn to calculus, namely differential equations. Here is a question from 1996 looking at it from that direction:

This is a differential equation; we have to find the function P, including a specific value of the constant k. (I would have used \(\frac{dP}{dt} = kP\); in that case my k would be called the rate constant; his k is the reciprocal of mine.)

The methods to be used would be taught in a calculus course; we won’t go deeply into why they work here.

We’ve gone through several different constants, one defined in terms of another, but  all we care about is that B is an unknown constant, and k is the constant of proportionality that we assumed from the start, but don’t yet know.

In pre-calculus courses, you might be taught this formula, without explanation; so at this point, if you don’t know any calculus, you can start reading again.

The answer to a problem like this can at least be rounded to the nearest whole number; significant digit considerations make the answer considerably less accurate than that, so rounding in this case to the thousands makes sense in real life. The exact answer using the rounded value of k would be 80,996.84… . But …

In other words, the fact that the rate of increase is proportional to the population tells us that the growth is exponential, so that it multiplies by the same amount in any given interval; since it multiplied by 3 in the first 8-hour period, it does the same in each.

For another presentation of the same technique (without such an easy shortcut, and using “my” k), see

How COVID-19 has been growing

Now let’s take a quick look at one of the graphs we see a lot at present; this is from https://www.worldometers.info/coronavirus/coronavirus-cases/ : 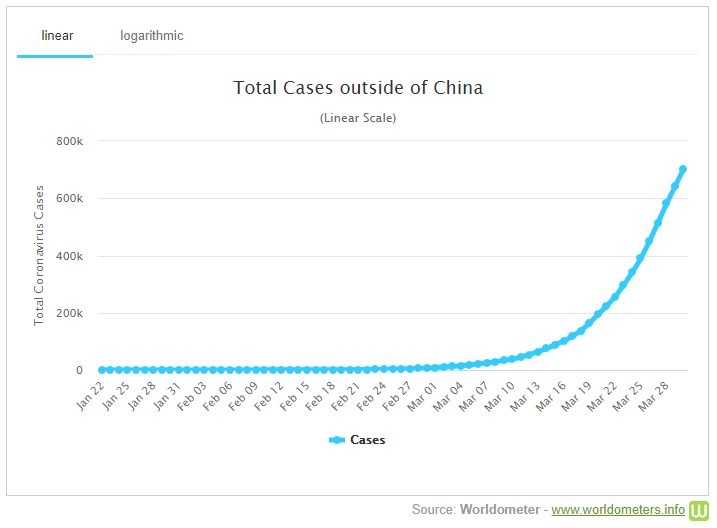 I chose a graph of cases outside of China, because graphs including China include odd hiccups due to changes in counting methods and the like. This graph looks like a classic exponential curve; but as we saw above, not everything that looks exponential is truly exponential. A true exponential curve would reflect uninhibited growth with a constant rate of transmission, related to the \(R_0\) you may have heard of: If everyone with the virus infects the same number of people per day, we would expect pure exponential growth. (Note: since this graph shows cumulative total cases, not current active cases able to be transmitted, exponential growth is not necessarily a good model for it!)

But how can you tell? I’ll be looking at that in a later post (on semi-log graphs), but we can get a preview here. If we click “logarithmic” on that graph, we will graph the logarithm of the number of cases (actually, it’s labeled in terms of N itself, but with markings where the log increases by 1 – that is, N is multiplied by 10): 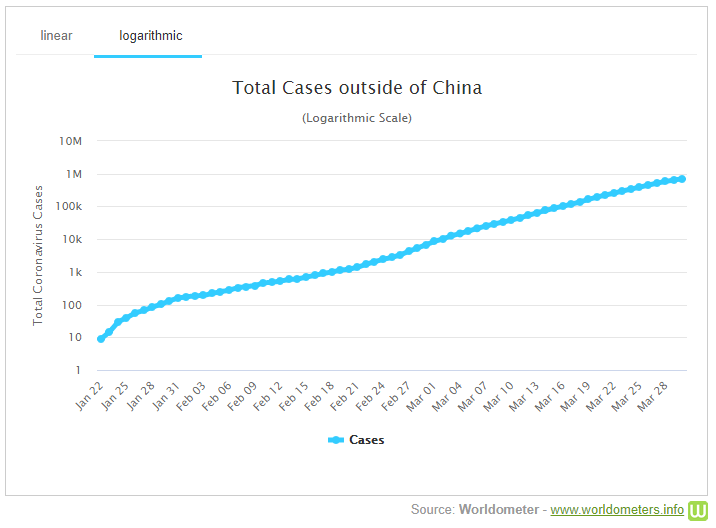 The most important thing here is that the growth so far is very nearly exponential, which means the growth is essentially unlimited (so far). Next time, I’ll look at a different kind of growth, called logistic growth, which is what exponential growth changes to when it reaches its limits. (There’s sort of a pun there …)