Last time we looked at the meaning of exponential growth, a term commonly used in describing the initial spread of a virus such as the current SARS2 (which causes COVID-19). But exponential growth can’t continue forever, as it would soon exceed the total population. A slightly more complicated model for growth that takes into account a limited population is called logistic growth; although this is still inadequate to fully predict the growth of a pandemic, it is worth exploring as a simplified model. We’ll look at a few explanations we’ve given for calculus problems about logistic growth, and then compare this with some current graphs that we see, notably the curve we are trying to “flatten”.

One thing we’ll observe is that the equation can be based on quite different parameters, and can be written in significantly different ways, which I hope to untangle.

The underlying idea here is that, in a limited population (unlike the assumptions for the exponential growth model), not only is the rate of new infections proportional to the number already infected (the more people have it, the faster it spreads), but it must also be proportional to the number available to be infected (the more there are who can get it, the more will). This is still a simplified model compared to real life (where recovery or death removes people from the infected count, for example), but it will be somewhat more realistic. Once the number infected becomes comparable to the total population, that starts to limit growth, and it will no longer look exponential.

You may wonder why it is necessary to define a variable p, when its value is a constant. One reason to do so is to allow us to make a general equation that could be reused for another problem with a different population; another is to avoid having to repeated write a big number (and perhaps make mistakes in doing so).

The derivative can be thought of as the number of new people infected per day; that is assumed to be proportional to the number already infected, and also to the number not yet infected. Now we can solve the differential equation \(\frac{dy}{dt} = Ay(p-y)\), then separating variables to write it as \(\frac{dy}{y(p-y)} = Adt\), and then integrating:

We commonly call the constant of integration C, but here we have one unknown constant A, and just called the new one B. The method of partial fractions, which we’ll see carried out in another example, transforms the integral \(\int\frac{dy}{y(p-y)}\) to \(\int\frac{1}{p}\left[\frac{1}{y}+\frac{1}{p-y}\right]dy\).

We’ll be seeing how to finish in the following answers. But for this version, the equation will turn out to be $$y = \frac{p}{1 + ke^{-rt}}$$ where \(k = e^{-Bp}\) and \(r = Ap\) are new constants derived from the arbitrary constants A and B; it doesn’t matter what A and B actually were. Instead, let’s think about what r and k themselves mean.

Observe that as t increases, y approaches p, as expected. (The whole population will eventually be infected in this model, which has no isolation and no immunity.) 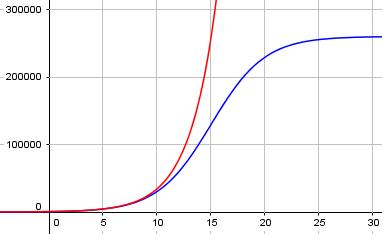 We see that the spread of the virus starts looking exponential, but starts to taper off as an increasing percentage of the population is already infected.We can also see that our r is exactly the exponential rate seen initially; if you have heard \(R_0\) mentioned in discussions of pandemics, this is what that is: the initial exponential rate constant, which is the same idea as the nominal rate in compound interest. The subscript distinguishes it from the actual rate of increase at any point on the curve.

This problem is very much equivalent to the last one, with a known total population and the number “infected” at two different times. It’s just a different “infection” being spread.

Doctor Anthony took this one, taking the same definition of logistic growth but with a slightly different approach:

This is the same differential equation, except that x is now a proportion (think of it as a percentage), so the total population has been replaced with 1. The actual number of people will be x times the total population. (This is an alternative way to avoid having to keep writing a big number!)

This time, the details of the work for “partial fractions” are shown, solving a system of equations for the two unknown numerators:

The same result was provided for free in the first problem.

Doctor Anthony doesn’t bother to solve for x, but finds the values of constants A and k first, which as we’ll see is very wise:

Note the approximation he could make because x is very small; our initial proportion is close enough to 0 to ignore in the denominator.

Now we have a value for A; next we find k:

Here, if we know the proportion \(\displaystyle\frac{N_T}{P}\) “infected” at time T, we can solve for k:

Note how useful it was to leave the equation not yet solved for x while finding these constants.

Since the goal is to find one specific value, Doctor Anthony chose just to solve for that value:

Our last question is from a little earlier in 1998, and is based on very different premises:

This time, we don’t have a population size, and the rate of growth is not based on that, but rather on two (presumably known) rates. Let’s take a moment to ponder what it means, and in what sense B and K can be called birth and death rates.

The left-hand side of the equation as given is the rate of change of population, divided by the population; that is, it is the relative rate of increase. In exponential growth, this would equal a constant: \(\displaystyle\frac{1}{P}\frac{dP}{dt} = B\). B here would be the growth rate; calling it the (initial) birth rate (births per year per animal, say) makes sense. (It’s the \(R_0\) mentioned above.) The model has been modified in the simplest possible way, by reducing the growth rate linearly as the population grows. So K is actually the rate at which the “birth rate” is diminished as population increases.

Doctor Anthony answered this one, this time using the actual population as the variable, rather than a proportion:

The same method of solution applies as above, but the partial fractions are a little more complicated:

We find the constant A from the initial value as before:

The curve we need to flatten for COVID-19

The graphs of total cumulative infections that we most often see, which initially look exponential (see last time), will eventually look more like the logistic curve, as everyone who will be infected becomes infected. If we look at a country that is past its crisis (we hope), we can expect to see something more like the logistic curve. Here is South Korea, from Worldometers: 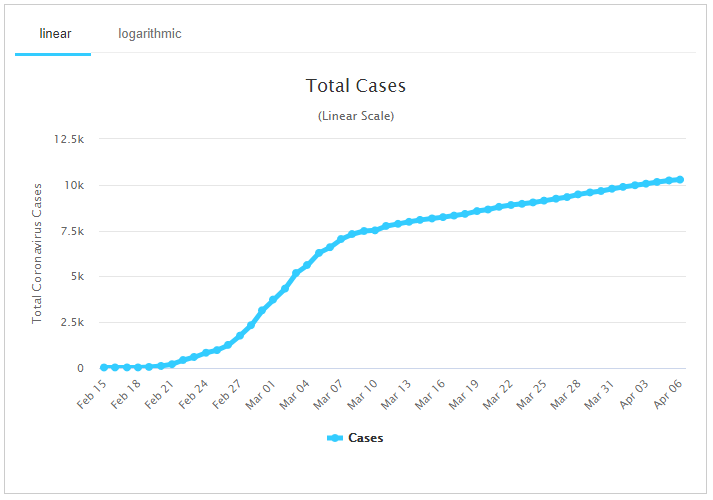 This has changed from an approximately exponential curve at the start to one that looks linear – not finished growing, but manageable. I will make no attempt to explain why it looks this way; that is for the epidemiologists!

For comparison, here is a graph of daily new cases in South Korea, from the same source: 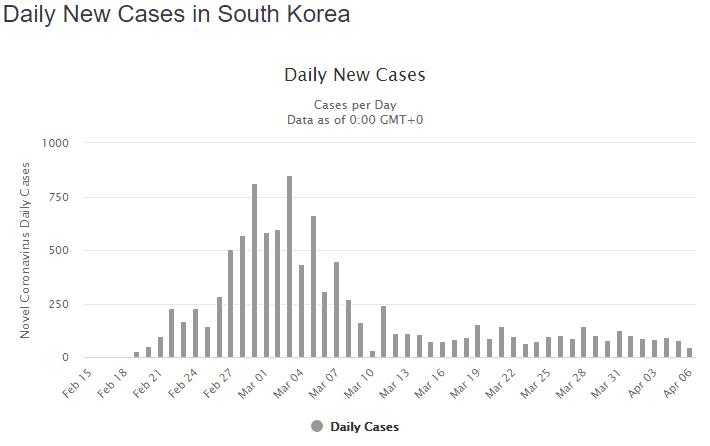 This shows that new cases continue steadily, accounting for the constant upward slope in the first graph.

And that is the curve we are told we want to flatten, as in this graphic from information is beautiful: 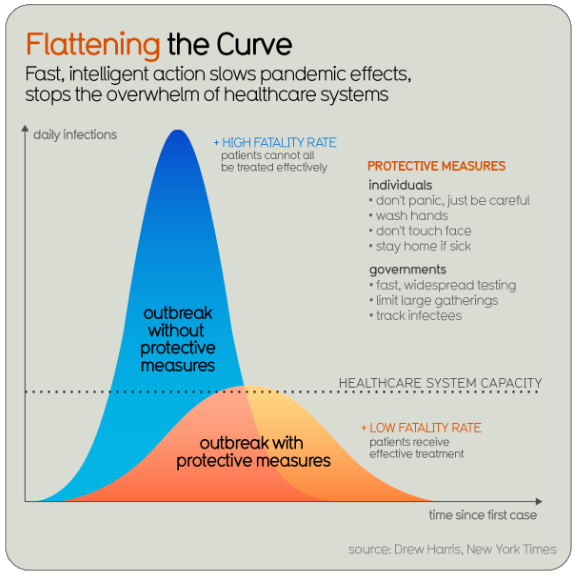 These curves represent the number of daily infections (new cases) – that is, the rate of increase of the cumulative total; in effect, its derivative. The area (integral) under this curve is the cumulative total we have been looking at; the idea is that even if the total number of cases is the same, if we slow down the rate, we can need fewer resources at a given time. Here is an earlier source of this concept, in a paper from 2017 at the CDC: 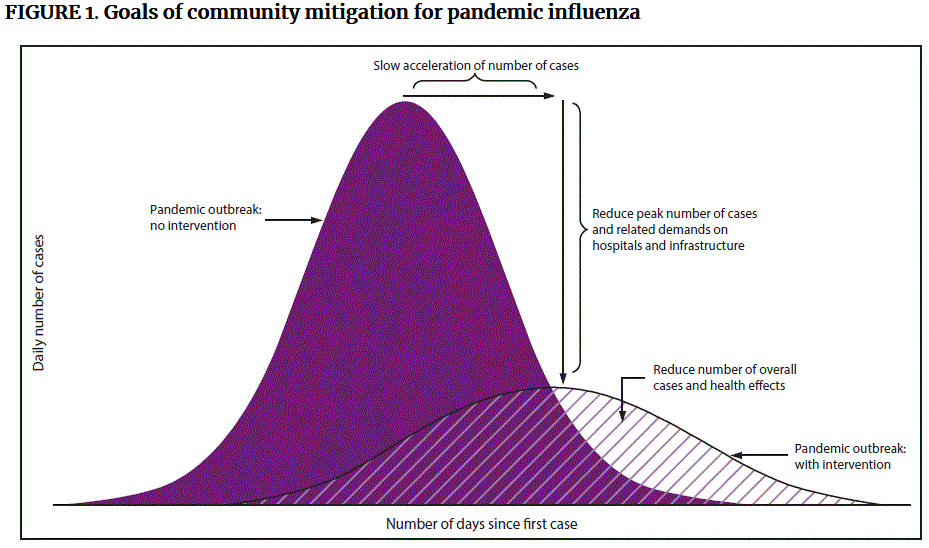 Something I think is commonly misunderstood is that “flattening the curve” refers not to the slope of the cumulative graph finally turning downward, away from the exponential curve, but to making the entire curve lower from the start, something that required effort long before we see a downturn. It means keeping the number of new cases as low as possible.

What happens if we take our logistic curve from the first example above, and graph its derivative (rate of change)? Here it is: 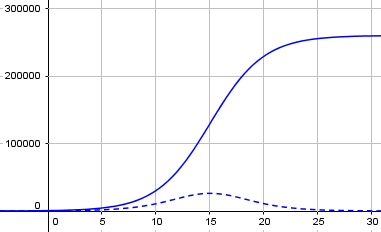 The broken line at the bottom is the rate of change of the growth curve; you can see that it is highest where the growth curve is steepest, at the middle, and symmetrically rises and falls. This is what we want to flatten; and we do that by decreasing the growth rate parameter. Here is what that graph would have been with r = 2 rather than 0.4: 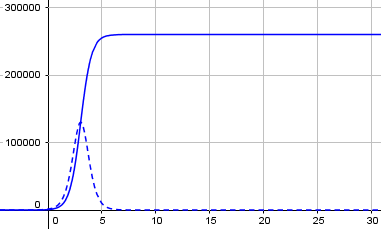 Now, this is a simplified model, as I’ve said all along. I found a nice explanation of what might be called the next step in accurate modeling, the SIR (Susceptible-Infectious-Resolved) model, in a video by Numberphile. Here is my own copy of their GeoGebra graph:

The blue line is the number of people who have not yet been infected (susceptible); the red line is the number who are currently infectious (which is a more accurate version of the curve we want to flatten); and the green line is those who have recovered or died (resolved or removed). Our cumulative total would be the sum of the red and green, and would look like the blue line flipped over. That is virtually identical to the logistic surve.

Next time, I want to look more deeply at something we touched on last time, namely the use of logarithmic graphs to recognize exponential growth.