This week I answered a seemingly simple question that can be solved in several different ways when presented as multiple choice, but is rather difficult as a straightforward algebra problem. Trying to guess what the “patient” had done yielded an invalid method that gave the right answer — or was it really invalid? Luckily, something about it seemed familiar, and I found the answer in a question from last year, which itself had a complicated history! The result is worth sharing.

Here is the question, from Sinan:

I found the inverse function and by the equation found the answer as 5. But 5 is not a desired answer according to the information given.

In case you are unfamiliar with the notation, this defines a quadratic function, restricting its domain to the left of its axis of symmetry \(\left( x = \frac{3}{2} \right)\); this makes it one-to-one, so that it has an inverse function. We are required to find values of x for which the value of the function equals the value of the inverse function. He got 5 as an answer, which is not in the specified domain, so he wondered if there really was no solution.

My initial response was to ask for details of his work, but in the mean time I suggested a possible error he might have made (which in fact he didn’t), and indicated both the direct method (which turned out to be what Sinan had done), and an easier method by which I got the correct answer:

As always, my first response is, please show how you got 5 as an answer! Just telling us what wrong answer you got doesn’t help us help you.

Does that give you enough ideas?

Sinan responded by showing his attempt to follow my suggestion, together with what he had first done:

It turned out that his original work was not what I thought, but was close to being correct; he took the “direct way” I’d described, but in finding the inverse, he neglected to choose the negative sign on the radical due to the fact that the domain of f was restricted to the left side of the parabola. Then he checked each of the five choices. The only reason I didn’t do this was my bias against using given choices by trial and error rather than actually solving the problem mathematically. (I don’t like to assume that the choices include all correct answers.) But what he did was undoubtedly the easiest way to solve it, given that it is a multiple-choice problem.

His equation should have been:

Sinan didn’t do all that, since it is a multiple-choice question;  just checked the given choices, and found that -1 is the one that works:

Note an interesting fact here: both sides of the equation happen to equal x itself. This will be important!

But in his attempt to do what I said, he instead did what I said not to do. So after explaining what I just showed, I continued:

I considered saying that this is a poorly written problem, because taking an unjustified shortcut like this happens to give the right answer, but I chose not to reveal that.

But I was getting curious: the “invalid shortcut” I had initially assumed Sinan had used by misreading the problem actually gave the correct solution; could it really be valid? I wanted to be sure. Examining the graph of the function and its inverse, I saw the fact that the solution lies on the line \(y = x\): 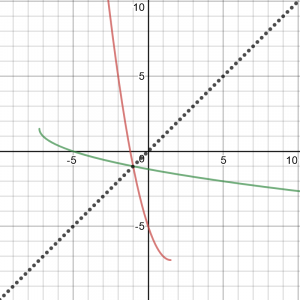 But when I had initially graphed the functions, I had not taken the trouble to include the domain restriction; I had seen this: 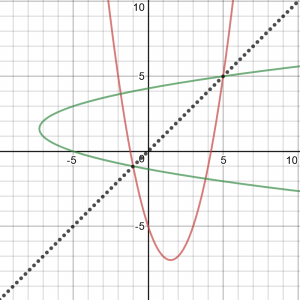 Here we see four intersections, only two of which lie on \(y = x\). (One of those, by the way, is the wrong solution Sinan had first found, by taking the wrong part of the inverse function.) But on closer inspection, the two other intersections are not between a function and its own inverse, but between the positive half of one relation and the negative half of the other.

I tried a couple more functions, and the same thing happened. So I was wondering it my shortcut were actually valid. I wouldn’t want to call a valid method invalid. Maybe the conjecture is true as long as we are talking about a one-to-one function and its inverse …

The truth (and a few errors)

But then I realized that this question seemed familiar, and vaguely recalled that the answer involved functions that were monotonically decreasing. Searching my records, I found the following (unarchived) answer from October, referring back to a previous unarchived answer that had been wrong. This is getting complicated!

Here is the subsequent answer I referred to; I later realized that it appears to be the same “Bilstef” under a different name, so we had given him both the wrong, and then the correct, answer:

Finishing the answer to Fida:

As you can see, Doctor Gaff misspoke; Doctor Greenie then recognized the correct answer; then I was almost convinced but realized my error. This illustrates why mathematicians don’t like to speak off the cuff and say something they think is right but haven’t proved. This is also why I took the time to pursue this question, having actually written and then deleted comments that suggested the “shortcut” might be right.

To tie up a loose end, here is the graph of the classic counterexample: 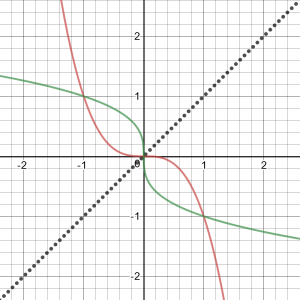