Our next series of posts will be about the concept of significant digits (also called significant figures), which are important in scientific or engineering calculations to keep track of the precision of numbers (although, as we’ll see, they are not what you would use when you need to be especially careful). We’ll start with the general concept and how to count “sigdigs”, and next time move into how they are used.

What are significant digits?

Let’s start with a very simple question from 1998:

Doctor Mitteldorf answered in terms of the need for them, which is an important place to start:

So significant digits are one way to keep track of how much accuracy you can expect in a calculation based on measurements, so that you can tell if an observation differs significantly from the theory being tested.

As a result of this, we only want to write that measurement as 10.31 or 10.314; anything more implies that we are more certain than we really are, leading to possible false conclusions. We only want to write the digits that are significant, in the sense that they should be taken seriously.

As a result, when scientists or engineers write numbers, they mean something more than they mean to pure mathematicians: not only a value, but a level of precision as well. Mathematically, we would say that 10.310 means the same thing as 10.31, but in the context of measurements, the former implies a more precise measurement.

How are significant digits counted?

Many questions we get involve how to decide which digits are called “significant”, particularly when some of them are zero. It can be surprisingly difficult to answer that question clearly without digging deeply into the reasons for the answer (as we will be doing in a later post). Here is a question from 1999:

As we’ll see, 5000 is a special case; the other zeros are more clear-cut. I answered, focusing on how to distinguish significant from non-significant:

We’ll be looking later into just what we mean by “contributing to the value of the number”. At this point, I’m giving a very informal description.

How about that 5000, where there is no decimal point?

The next question, from 2001, gave me a chance to elaborate on that “scaffolding” image:

We need to think more about what “significant” means, especially for zeros. I replied:

I’ll have more to say about this below. But the main idea is that in my building, the highest floor is 7 stories above the lowest, and that would still be true if we removed the columns at the bottom to make an 8 story building.

This is one reason that serious science is commonly done entirely using scientific notation.

I wasn’t familiar with the “Atlantic-Pacific Rule”; it turns out to be a common mnemonic (in America only!), exemplified by this page: 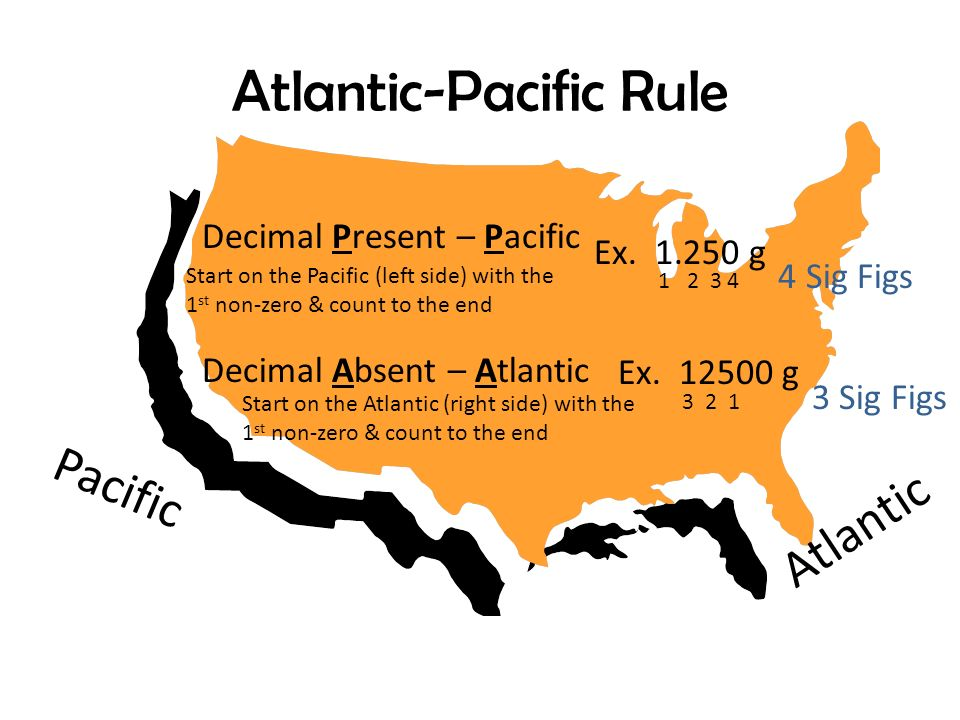 It agrees with the descriptions I’ve given; but like many mnemonics, it may distract students from thinking about the meaning of what they are doing, by focusing on the mechanics. And it entirely overlooks any ambiguity.

I started with the essential meaning of significant digits:

So the concept is based on trusting that the writer would only write what is known. It is, of course, zeros that complicate this …

So someone who writes 1,000,000 has no way to indicate, within the numeral itself, how much of it to trust; so the convention is that we don’t trust the zeros. But someone could write 1,000,000 and tell us on the side that it is accurate to, say, the nearest ten-thousand (three significant digits), and that wouldn’t contradict the way it was written. This is what we mean by ambiguous. And this may be why some teachers said the rule doesn’t always “work”.

How to avoid the ambiguity? Use scientific notation:

There was more to Forest’s question:

Good questions! I continued, talking about the real purpose of the convention:

This is the reason the zeros between the decimal point and the first non-zero digit are not significant: They don’t affect the relative error, because they change both the size of the number (each zero dividing it by 10) and the size of the possible error, in proportion.

He wanted rules, so I gave him rules (essentially the same as his Atlantic-Pacific rule, with the addition of ambiguity):

Listing all the cases helped to reassure me that I wasn’t oversimplifying anything; in each case the rule agrees with the required meaning.

It’s always encouraging when we can know we succeeded.

I’ll be looking deeper into the relative error interpretation in a later post, after we first look at how significant digits are used in calculations.