We’ll spend the next couple weeks looking at various counting problems. This topic, called combinatorics, is often studied along with probability, but many of the topics we’ll see here feel more like geometry problems! Here, we’ll be counting the diagonals of a polygon, and handshakes between people at a party.

We’ll start with a question from 1998 about counting the diagonals of a polygon:

Here are examples of polygons with smaller numbers of sides, showing sides in blue and diagonals in red: 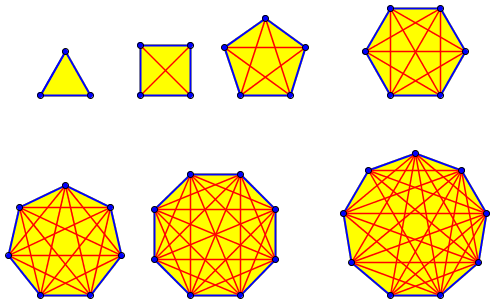 Molly probably didn’t go as far as 9 sides; but as I count here, for n = 3, 4, 5, 6, 7, 8, 9, the number of diagonals is 0, 2, 5, 9, 14, 20, 27. If you made a table of these numbers and apply some of the methods we’ve discussed previously for finding patterns in sequences, you could probably find one – but you wouldn’t be sure it’s the right pattern, and might not find a formula. (By the way, my pictures are all of regular polygons, but nothing will change if we make them irregular, except that if the polygon were not convex, some diagonals might go outside. The counts wouldn’t change.) 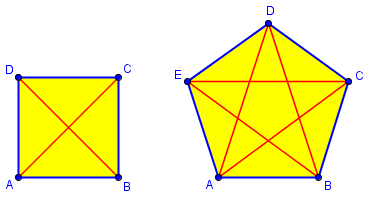 We’re looking not just for the numbers, but for a way to count that will lead to a formula. So we haven’t even counted the two diagonals yet, but just noticed that there is one from each vertex …

This way of describing it suggests the beginning of a pattern!

So for n vertices, there will be n – 3 diagonals through each.

Without stating the actual answer, he has effectively given it, so that Molly should be able to write the formula now: $$Diagonals = \frac{n(n-3)}{2}$$ Applying this to small values of n, you should find the numbers I got above. But to be honest, when I wrote those numbers down, I wasn’t using this formula; I used the recursive formula we’ll see below, with which I could write each number based on the previous one. And then I checked that the actual count matched by actually seeing, for instance, that with n = 9, there were 6 lines coming from each of 9 vertices, for a total of \(\displaystyle\frac{(6)(9)}{2} = 27\).

A student in 1997 had been shown the formula that results from this thinking, and wanted more:

Doctor Wilkinson answered this one too, first correcting the implied question (since finding diagonals would mean actually drawing or naming them), and quickly deriving the formula:

This, of course, is what we just did, stated fully.

Here (for n = 6) we insert a new vertex into a pentagon, which adds 3 new diagonals and changes one side to a diagonal (all in purple):

Handshakes all around: Three ways to get the formula

Our next question, from 2001, will help us move over to a different but related problem:

That’s a lot of sides; to answer, you’ll need some sort of formula.

Doctor Pete answered, starting with some leading questions like those we’ve seen:

Each diagonal is the starting point for 3 “directed diagonals”: 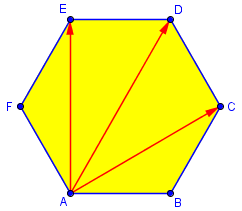 Two of these correspond to one actual diagonal.

A diagonal can go to any vertex except the one it starts at and the two neighbors, so there are 39 destinations for each of the 42 starting points. This gives a total of \(42\cdot39 = 1638\) “directed diagonals”; dividing by 2, we have 819 diagonals. We didn’t need an actual formula after all, did we?

Now Doctor Pete switched to a non-geometrical problem, which we’ll be focusing on for most of the rest of this post.

This is like counting, not the diagonals only, but the diagonals together with the edges of a polygon – all the lines joining any two vertices. This time, there are n – 1 handshakes/segments for each person/vertex. Here are the handshakes originating from one person in a six-person party: 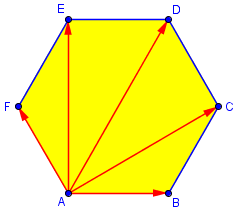 Such a number is called a triangular number, and the formula is known. We have just proved it, merely by seeing our handshake number from a different perspective. In a moment we’ll see how to find it if we hadn’t already known the formula. 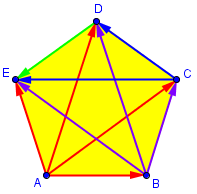 The diagonals can similarly be seen as a sum, but it’s harder to see without thinking in terms of the recursive formula I showed above.

This is how we prove the formula for triangular numbers, or equivalently for the sum of an arithmetic series.

Back to the diagonals

The Handshake Problem on its own

The handshake question is one we have often been asked on its own, so let’s look at a couple answers to that, with or without reference to polygons. First, one from 1997:

This time the question was about handshakes, but the answer is the polygon model. It works both ways! He uses the lines-per-vertex approach:

Next, the multiplication method, explained in a way that matches a common way to explain combinations:

There’s a lot of dividing by two going on around here; both methods have a lot in common.

In gathering these (and several other) discussions of these two related problems, I ran across some other “handshake” problems that are too good to skip, even though they are not about counting. They’ll be the subject of the next post, before I get back to counting.

3 thoughts on “Polygons and Handshakes”