Last week we looked at problems about counting diagonals in a polygon, and the very similar problem of counting handshakes when everyone in a group shakes with everyone else. In the course of searching for those problems, I also found some very different problems that are also about handshakes. We’ll look at those here, just for fun.

First, let’s look at a question from 1996 that just reverses the problem:

Doctor Anthony answered, by first deriving the formula as we’ve seen before:

But this time, we don’t know n! That’s what we have to find:

To check, each of the 10 people shakes 9 hands, for a total of 90 hands involved in shakes; divide by two for the actual number of shakes, and we have 45.

If there were no positive integer solution, then we would know that the handshakes had been miscounted (or the whole thing was made up with random numbers!). Only certain numbers can occur as the number of handshakes (when everyone shakes with everyone else); we could call these “handshake numbers”. But that would be yet another problem …

Everyone with a different number

Now we’ll look at some entirely different problems, starting with this from 1999:

We’re interpreting the problem to say that Jake himself was among those who all gave different answers, so that his wife is the tenth; if he didn’t answer his own question, so there were only 9 answers (including his wife), then the problem would be unanswerable. As we’re taking it, the 9 other than his wife (including himself) use up all 9 possible answers, and then his wife gives a tenth answer (which has to match one of the others).

Here are the ten people, with couples joined by blue lines: 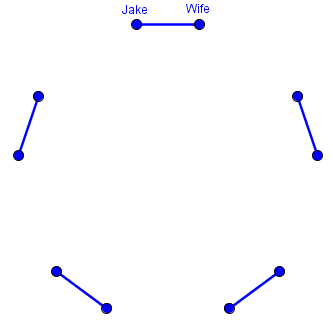 So we have something like this, where red lines represent handshakes known so far: 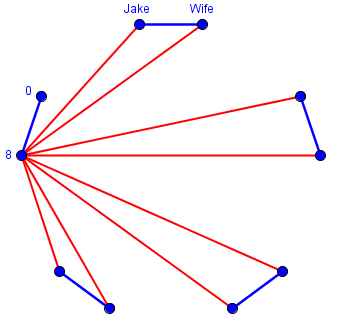 Person 8 shook hands with everyone except himself and his wife, which is as many as possible.

We’re starting over with only 8 people, and ignoring the handshake each of them would have had with Person 8: 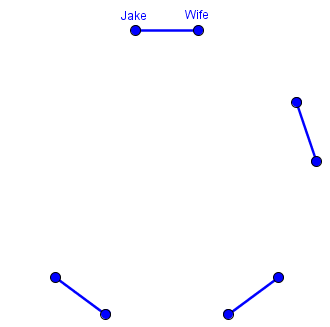 This couple answered 1 and 7 to the actual question, so we now add these shakes: 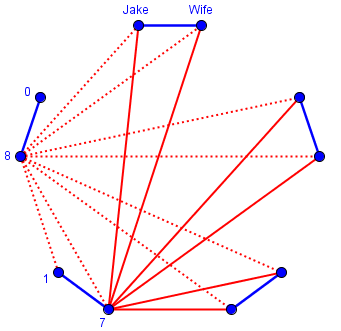 Person 7 shook hands with Person 8 and 6 others.

They answered 2 and 6, when we add back the two handshakes we ignored: 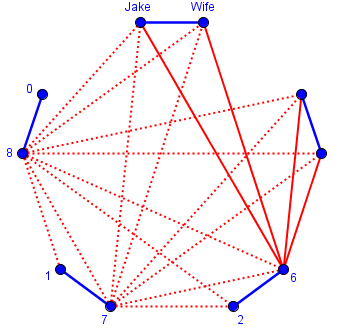 Here is the final round, adding in the people who shook 3 and 5 hands in all, and counting the hands Jake and his wife shook: 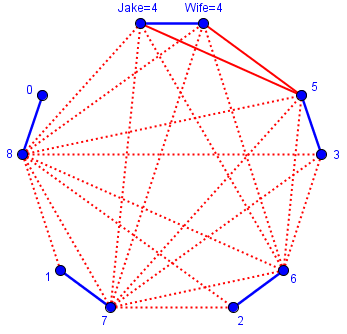 Interestingly, each couple shook a total of 8 hands. I don’t know if there is a quick way to have seen this.

How many men and women?

The next problem is really just algebra, but interesting to consider along with the others. It comes from 1996:

Here we’re assuming that the Li’s did shake hands with each other, taking what it says literally. (Otherwise, they would have shaken hands with exactly the same people, and what is described could not be true.)

Therefore there are 16 men and 5 women (including the Li’s), for a total of 21 people at the party. Here I only have to show Mr. and Mrs. Li’s handshakes, with men in blue and women in red: 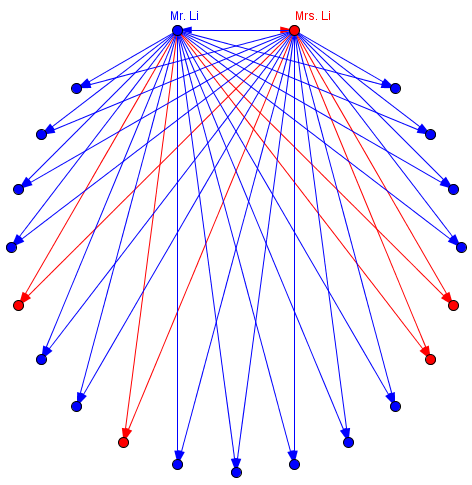 The mention of Pascal’s Triangle refers to the fact that it contains binomial coefficients, which count combinations; in particular, we need \({{21}\choose{2}} = \frac{21\cdot 20}{2\cdot 1} = 210\) handshakes in all. If you like, you might calculate the number of male-male, female-female, and male-female shakes! (Careful; there’s a little twist.)

Even and odd handshakes

Now we have a proof problem, from 2001, which again is reminiscent of the “Handshake Problem” but is entirely different. In fact, it is what we call a “graph theory” problem, dealing with dots (nodes) joined by lines (edges)

It can be almost that easy, but it needs clear reasoning to become a proof. We’ll get to that, but not just yet!

Before we start, here is a random example representing a group of people who have shaken hands, though not with everyone: 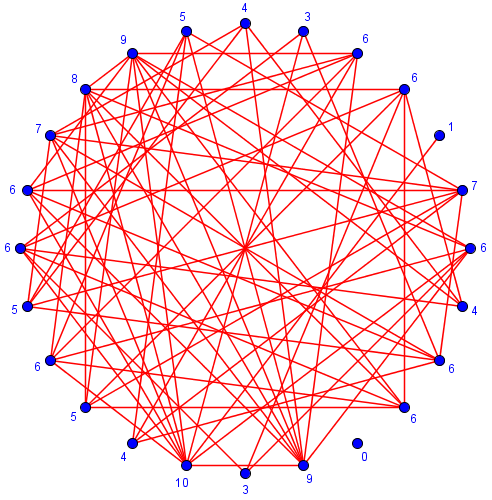 What we’re doing here is, in part, just “playing” with the problem using small numbers, to see how things work; while also starting in the direction of a possible inductive proof, building up to any number of shakes one by one. Or, rather, we are proving that the parity (oddness or evenness) of the number of odd shakes is an invariant, unaffected by any step you take in building up a set.

Here is my example above with one node (and handshake) added on the left, and another on the right, showing the two cases: 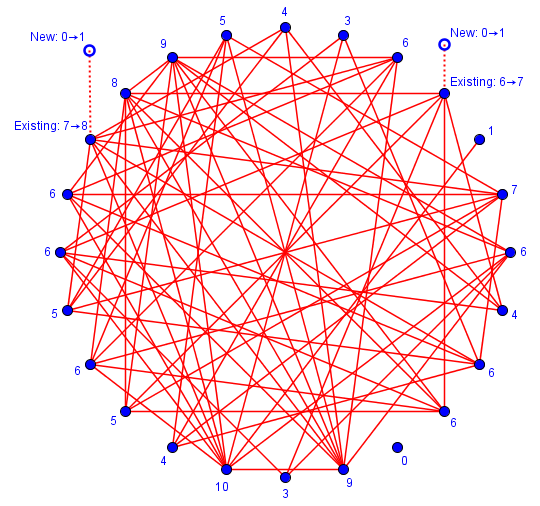 Here are examples of all three cases: 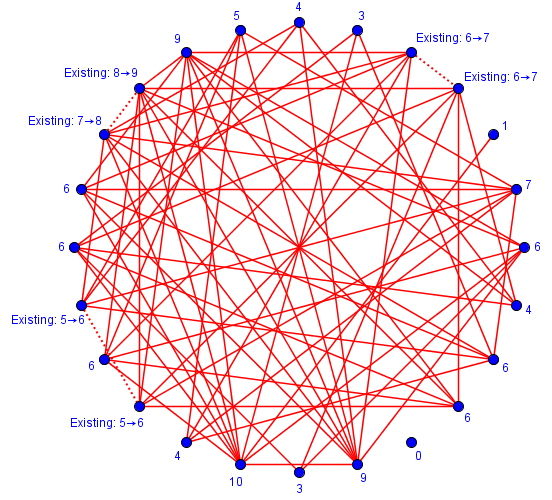 We had received exactly the same question the previous year (2000):

Experimentation is a good idea; but a proof is needed. Doctor Wilkinson answered:

This appears to be Telinda’s idea from the last question! Since the total number of “hands” is even, there can’t be an odd number of shakes.

And this brings us full circle, as in the counting problems last week, “every handshake gets counted twice” was a key factor.