We’ve looked at how to count diagonals in a polygon; this week and next, I want to consider two different problems (though they look similar at first) dealing with chords of a circle (which are practically the same thing as diagonals of a polygon). In each, what we count will be the regions into which the circle is cut. We’ll see how several Math Doctors solved the problem, each from a sufficiently different perspective that it might communicate better to certain readers; so if you don’t follow one, keep reading!

For the first problem, we can start with this question from 1998:

Here is a simple example, with 3 chords dividing the circle into 7 regions: 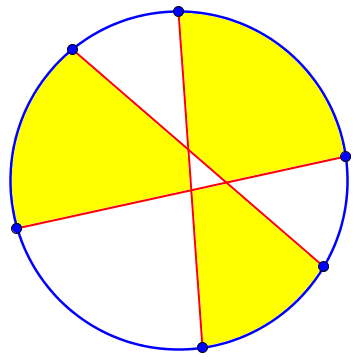 We’ll be seeing different characterizations of the same problem, in which we are only asked for the maximum number of regions; that will turn out to imply this idea that each chord intersects all the others. For example, if my three chords intersected at one point, we would lose a region, and have only six: 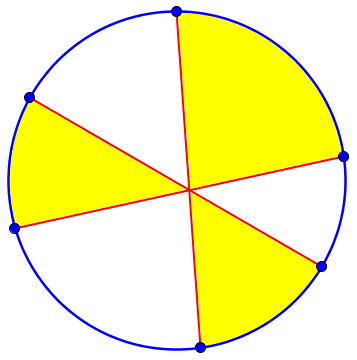 On the other hand, if any chord does not intersect all the others, we again have fewer than 7 regions: 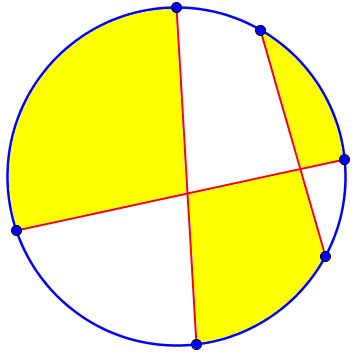 Doctor Jaffee replied, using an approach based on looking for a pattern in the numbers:

Here are the first few cases, showing how each new chord n crosses each of the previous n – 1 chords, cutting off n new regions (one from each of the n regions it passed through), thereby adding 1, then 2, then 3, then 4 regions:

Doctor Jaffee has made a table of values, then used the fact that if the difference increases by the same amount at each step, the formula will have quadratic form. For example, looking at the perfect squares, 1, 4, 9, 16, we see that the differences from one term to the next are 3, 5, 7, and so on, always increasing by 2.

We’re going to solve for the three coefficients of the formula.

One way to solve the system of equations is to first subtract each equation from the next one, leaving two equations in two unknowns: $$2=3a+b\\3=5a+b$$

A similar question was asked in 2001, and got two answers:

Here the problem is phrased in terms of the maximum number of regions, rather than telling us each chord crosses all the others; and it asks about a specific number of chords, not a formula. But a formula can help Jordy know whether what he has drawn is the best he can do. And so will the concepts behind the formula.

Doctor Rob was the first to answer, providing the formula we just saw (without proof) and a way to actually draw the figure, which accords with our observations above:

Here is the benefit of having a formula; we can tell whether we have reached our goal in the drawing. 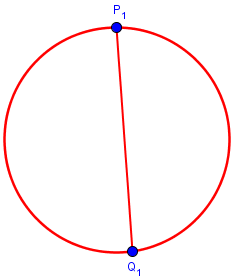 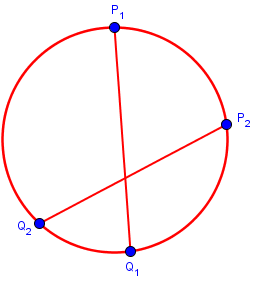 If the new points were on the same side of the first chord, we wouldn’t get the maximum number of regions, so the order is important. 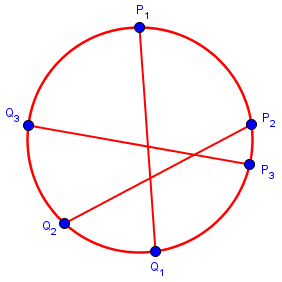 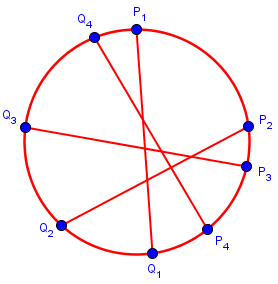 It’s getting harder to avoid intersections, as the regions are getting small.

Here is my result, after making many adjustments of existing points to make room: 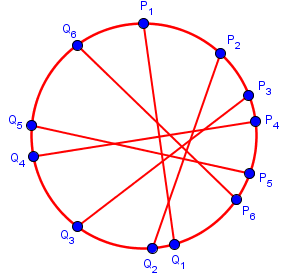 Now he suggests a more orderly way to pick the points that will ensure that everything fits:

This produces a more regularly spaced pattern that is easier to count: 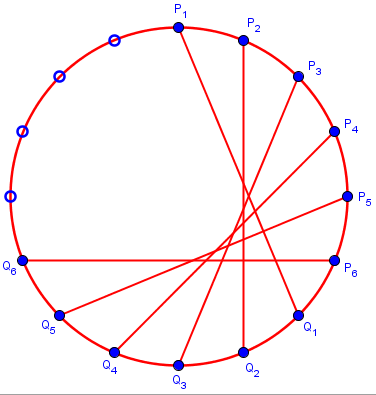 Doctor Greenie, who probably had been writing as Doctor Rob wrote, stepped in with essentially the same  approach, but this time leading to the formula:

If you’ve followed the thinking as others showed it, you may skip the details below; but if you need any help being sure of the hows and whys, this should make it clear. If I drew pictures for this, they would be the same we’ve already seen:

So rather than actually drawing all the way to 6 lines, we can quickly make a table, and get to that answer of 22. Or, we can turn this into a formula:

From recursion to summation to formula

For one more derivation of the formula, we turn to this question from 2001:

Here the anonymous questioner has already made the table and seen the recursive description, and wants a formula. Doctor Anthony replied, first writing the recursion explicitly:

As we’ve seen, each added line adds as many regions as the new number of lines. This could have been written as \(f(n)=f(n-1)+n\), but here we are thinking of obtaining the next number when we already have \(f(n)\). Now he writes this as a “telescoping” sequence of equations:

This is equivalent to what I said at the end of Doctor Greenie’s method.

Checking a few known answers is a good practice whenever you obtain a general formula!

Next week: What if we are given n points on the circle, and connect them with all possible chords?

5 thoughts on “Cutting Up a Circle I: Using n Chords”