As the capstone of this series on counting, lets look at something that’s a little harder to count by drawing: What is the maximum number of regions into which all of 3-dimensional space can be divided by n planes? We’ll look at two significantly different perspectives.

Working up through the dimensions

The numbers given here are correct, as we’ll see; it isn’t clear how Kirste is using Pascal’s triangle (the numbers are not obviously present there), so we can’t be sure how close she came to a proof.

Doctor Tom answered, working step by step up to this three-dimensional problem:

We start with 1 region, and add 1 more for each point (new points are in blue here):

This is a quick version of what we saw two weeks ago about cutting a circle with n lines, but now we’re seeing it as an extension of a pattern going from one dimension to the next. Each (n + 1st) line we draw cuts each previous line, so that it is divided by n points, and therefore is divided into n + 1 parts, and adds n + 1 regions in the plane (new lines and points are in blue here): 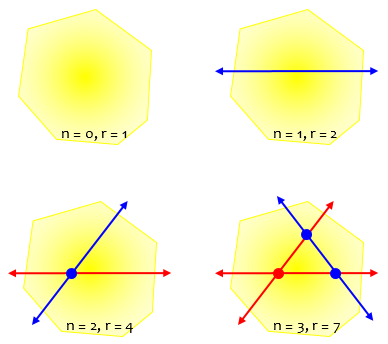 Each (n + 1st) plane cuts each previous plane in a line, so that it is divided by n lines, and therefore is divided into the number of parts from the previous sequence, thus adding that many new regions to space (new planes and the lines that divide them are in blue here): 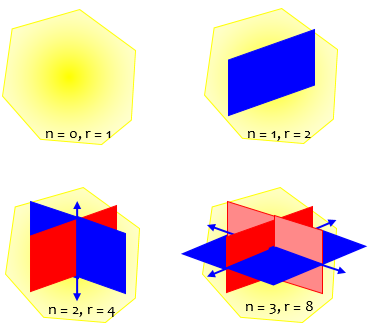 Moving to a formula

The page he referred to is much like one that we saw two weeks ago, for lines in a plane rather than a circle. It turns a difference equation into a sum. Let’s try doing that here.

As we did two weeks ago, we could instead have obtained this formula by seeing the table as a difference table, upside-down, which tells us that the formula will be a cubic polynomial, and solving four equations for the four coefficients.

A similar question was asked again in 2001:

Gafur, like many, has fallen into the now-familiar trap of seeing a false pattern; the last number, 16, is wrong.

Here are the three planes: 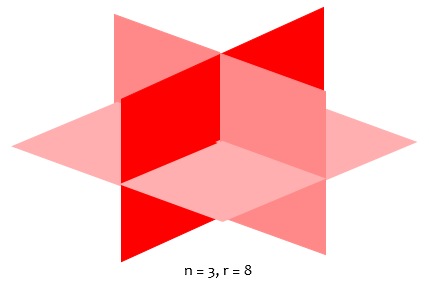 Here we see that the fourth plane, cut by three lines, misses two of the 8 regions, so it adds only 6: 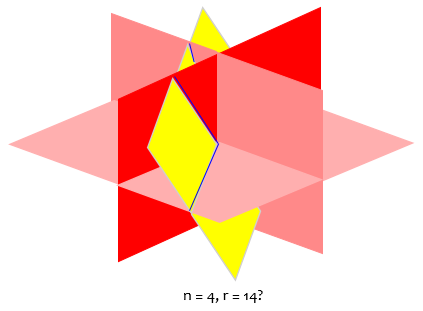 That isn’t so easy to see, so we can make it easier:

Here is our fourth plane: 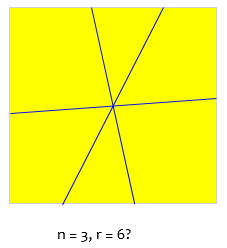 With three lines, we’ve (so far) divided this plane into 6 regions; so it must pass through 6 regions of space, adding only 6 to our previous 8 for a total of 14 regions: 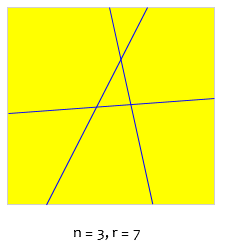 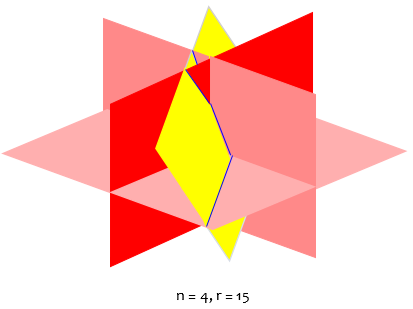 But you don’t need to see this to know what’s happening!

How about a fifth plane?

In search of formulas …

Now, we might well wonder whether this beautiful pattern is true in other dimensions.

All we need is a direct way to get to these formulas. Can you find a way? I’ll leave that as an assignment for the reader. (It’s hidden in what we’ve already gone through!)