Last week we looked at counting the maximum number of pieces into which a circle can be cut by n chords (straight lines). Here we will look at a similar-sounding problem where we use all the chords formed by n points on the circle. We’ll also see an important example of why we shouldn’t jump to conclusions about “patterns” we think we see.

Searching for a pattern

We can start with this question from Daniela in 1998:

Doctor Schwa answered (already knowing the answer, as we’ll see, but going along with the discovery approach):

Although the Fibonacci connection is interesting, we’ll see that it is wrong because the numbers aren’t quite right!

Finding a pattern in the way you count, rather than just in the numbers you get, is a key idea also discussed in the post Building Patterns and Sequences.

Here are the next two cases, for n = 6 (twice) and n = 7. Observe that the first is a regular hexagon, and three diagonals meet in the center; in order to get the maximum number of regions, I’ve moved one point aside in the second picture, adding one region:

So for n = 6, the correct number is not 30 but 31. (And if you were expecting 32 because of the apparent pattern, we’ll be discussing that later!) For n = 7, the regular heptagon works fine, showing 57 regions. (Go ahead and count them; I’ll wait!)

In working through this, I noticed (as I never had before) that the problem didn’t specify that we want the maximum number of regions; it’s possible that the intent was to use regular polygons. In that case, the problem that was posed is quite difficult, and in fact was only solved relatively recently! That problem is briefly discussed here (the page title is inaccurate, and you’ll have to add n to get the numbers in Daniela’s list above):

But the problem Doctor Schwa is answering is one that can be solved by ordinary people, so we’ll stick with it.

Adding one point at a time

Rather than start with numbers that we hope were counted right, it’s safer to focus on how you do the counting: the method is a clue, as he said:

Each time we add an nth point, we add n – 1 new lines (in blue), and one new region for each segment of those lines:

For example, the last figure shows adding the 4th point, which adds 3 lines, which consist of a total of 4 segments; each segment split an existing region, so we have 4 new regions, raising the total from 4 to 8. 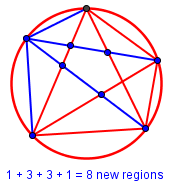 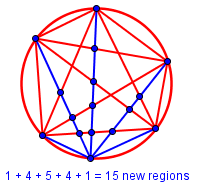 The agreement, as we saw above, is because with 7 points (a prime number) there are no multiple intersections among diagonals for the regular heptagon.

Actually, the pattern as described here, thought of from the right perspective, will lead to a neat solution that we’ll see in our last answer. Just to get you thinking: We start with one region; then for each new line we draw, we got one new region for each intersection we create, plus another region just for finishing the line …

But how about another way?

Last week, looking at regions formed by n chords, we saw that one method used the equality of second differences to determine that the formula was quadratic, and then we found a formula that fit algebraically. We can do the same here (now that we have used the pattern we found to confirm that we have accurate numbers):

Let’s carry this out:

A post on “finite differences” has been in the works for a long time, and will hopefully be coming soon! But for more information, you can search Ask Dr. Math for the phrase.

Using the pattern to make a sum

Here is the question he referred to, which was actually posted only five days earlier in 1998:

Doctor Rob answered, first stating the formula that will be derived, in two forms:

That second form is just what we (well, I) found above. The first form is found most easily by a method I’ve been hinting at, which is the goal of this post. But for now, we have a method that starts with the pattern we already saw:

At the end, he is reversing the process, using well-known formulas for binomial coefficients C(n,k), which is also written as \(_nC_k\) or \({n}\choose{k}\). It would be more natural just to produce the quartic equation we found previously.

Frankly, I’ve included this, which is a huge amount of algebra that I don’t expect anyone to follow, just to make the next answer even more satisfying.

For a more direct way to the same formula, here is a question from 2003 (which was combined with an answer we looked at last time, to the other circle-region question!):

This is the pattern I pointed out above: In looking at the number of regions added by a new point on the circle, we observed that we add one region each time we cross another line, and another when we finish the line. So each interior intersection corresponds to a region, as does each line drawn. We can count them all at once, rather than point by point. For example, looking again at the case of 5 points: 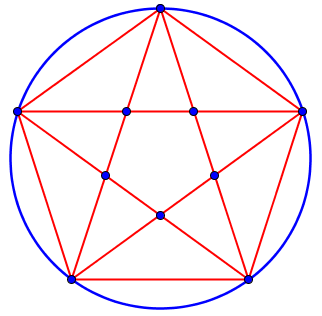 Now, how can we calculate the numbers of lines and intersections? 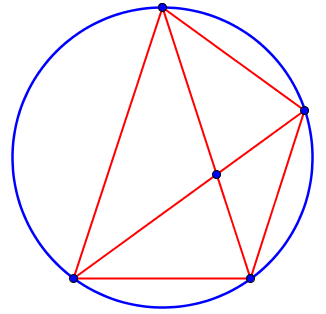 For an interesting question from 2001, where this week’s topic was confused with last week’s, read this: