Last time we looked at a formula for approximating the mode of grouped data, which works well for normal distributions, though I have never seen an actual proof, or a statement of conditions under which it is appropriate. We have also received questions about a much more well-known, and well-founded, formula to estimate the median. Here, it is possible to give a solid derivation, and to clearly state the assumptions on which it is based.

Here is the initial question, from 2007:

Daya recognized that the formula is related to the ogive (also called the Cumulative Distribution Function, or CDF), but wasn’t able to complete the derivation. The formula is, again, $$m = L + \left( \frac{\frac{N}{2} – F}{f}\right)C.$$ For a well explained source, see

Math is Fun: Mean, Median and Mode from Grouped Frequencies,

which I referred to last time; this says, under Estimating the Median from Grouped Data,

I answered with a statement of what the formula does, and a quick derivation:

Our formula gives the x-coordinate of the point on the graph where y = N/2. Here is a better version of the graph: 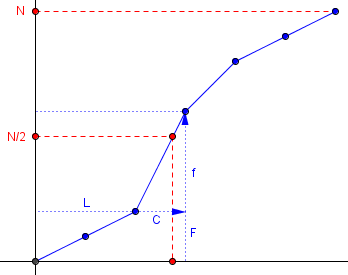 A specific example for clarification

In 2016, another student, Pramod, asked about the same formula, giving his own derivation that led to a slightly different formula:

This was an excellent attempt, and just missed two details. I responded by first referring to the answer above (to which this question was later attached):

When classes are described in terms of integer values, the lowest and highest values in a class are called the class limits. But in a formula such as this, we need to treat the data as continuous, so we use, not these class limits, but the class boundaries, which are real numbers halfway between classes. Here, the lower boundary of the median class would be 79.5, which is 0.5 below the lower limit, 80. (Note that the word boundary is used in both statements of the formula above.)

I didn’t take this distinction into account in my answer to Pramod; and his work suggests that he is in fact assuming continuous (real number) data.

The principal error in Pramod’s derivation was including the lower limit (or boundary) of the next class in the median class:

Here is a more accurate graph: 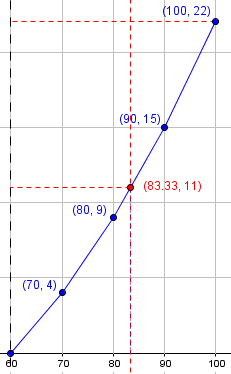 The graph vindicates the formula.

Note, though, that if we really had integer data, we couldn’t uniformly distribute 6 values across 10 units; that’s another sense in which the formula is only approximate. It necessarily assumes a continuous distribution, in addition to the piecewise-linear CDF.

41 thoughts on “Finding the Median of Grouped Data”