We’ve been looking at some issues involving frequency distributions and the classes used in them. Let’s look at a related concept with some similar issues, namely the cumulative distribution function (CDF), also called an ogive (more on that name at the end of the post!).

What is an ogive?

Before we dig into the question itself, let’s pay attention to the terminology, which not everyone will be familiar with.

This is written in such a way that time is taken as a discrete quantity measured in whole seconds; no runners took less than 10 seconds, 3 took 10, 11, or 12 seconds; and so on. To make the cumulative distribution, we add the frequencies up through a particular class, by adding that class’s frequency to the cumulative frequency before it:

Therefore, the 7, for example, means that 7 runners took anything up through 15 seconds. A graph would look like this, where I am using the class boundaries as Ted did in his question, rather than the class limits as some authors would do):

Ted’s question is about whether the ogive represents the number less than a given value, or less-than-or-equal, and how to handle those boundaries.

We have seen this several times before, that a convention may not be shared by all mathematicians (not to mention people who merely use math without fully understanding it). In the same way that language varies (I suspect that “ogive” is not nearly as common in the U.S. as in some other countries), definitions themselves can vary.

But we’ll be seeing evidence that Ted’s class does use the “usual” definition.

Boundaries are between values

As I mentioned above, the data are given as a discrete distribution, which is why Ted used boundaries halfway between the limit (e.g. 9.5 between 9 and 10). But this implies that there is no ambiguity in talking about all times less than, or less than or equal to, one of these boundaries, because no time is exactly on one.

What leaves me a little puzzled is that the definition of the CDF fits with continuous classes defined like \(7\lt x \le 10\), but as we’ve seen in recent posts, it is common instead to define them like \(7\le x \lt 10\). I find that to be true among the pages I’ve looked at in writing this post to confirm common usage of the CDF. (On the other hand, several pages I’ve looked at about the ogive, specifically, have used \(7\lt x \le 10\). I’ll look into this below.)

In fact, many of the sources I find for drawing an ogive specifically mention that the curve is to be “hand-drawn” (not perfect straight lines), suggesting that the point of the graph is to indicate (subjectively) what the CDF might look like if we used the original data rather than the classes. That is necessarily approximate.

So concern about precision is misplaced; being off by one would not really matter.

I haven’t really answered his question yet. It will help to make things more concrete:

This is the graph I drew more exactly above, but this time as a probability distribution, with the vertical axis marked as percentages. Here is my graph with that 40% line added in:

Incidentally, what we’ve done here is essentially what I discussed in Finding the Median of Grouped Data.

Now we use the careful definition we had found to interpret what this intersection means, using the points I made earlier:

This is a point I’ve made repeatedly recently: grouping loses information, so everything we say is based on a series of guesses.

Here is the picture I referred to (unless it’s changed since that time): 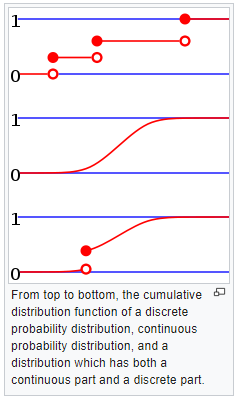 An ungrouped discrete distribution would be like the top graph, with each individual point causing a jump in the cumulative count. But we don’t have that much information.

This is the evidence I mentioned, that this class is using our “less-than-or-equal” definition for the CDF.

Ted responded in a gratifying way:

Note that Sam’s source used the [a, b) style for classes. Also, the CDF is called “the less-than type” as opposed to the “greater than type”; it is not, apparently meant to exclude “or equal”.

In reply, I referred to the answer above, and added:

So, for discrete distributions, we take the boundaries between values, so the highest actual value in a class will be included in the cumulative count; for continuous distributions, any one value in principle has probability zero of occurring, so including it or not theoretically should mean nothing. (This is true, for example, of the normal distribution.) But it is entirely possible that a textbook that excludes the upper boundary from a class, would also exclude it from the cumulative count. It would be interesting to do a survey of books and other authorities to see how these choices are correlated.

Why is it called an ogive, anyway?

As I’ve said, “ogive” is not the term I learned for this kind of curve; but I was familiar with the word before I’d ever seen it in this context. If you are curious, here is a question from 2002:

(The link, to “Doctor Pat” Ballew’s own page of math etymology, is broken, and I can’t find the site’s current location, even through the author’s blog. The origin of the word is not entirely certain.)

Here are some architectural ogive arches: 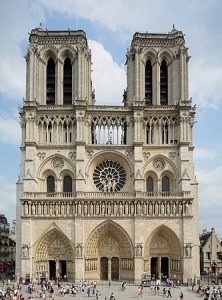 My impression is that the statistical term relates more to the related concept of ogee arch, 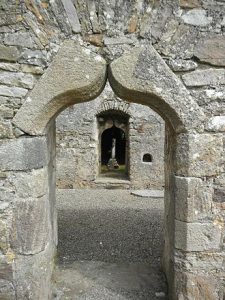 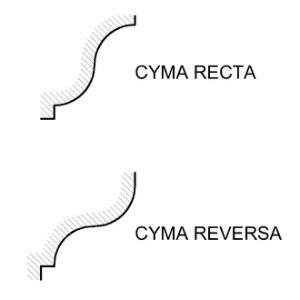 each of which relates to the typical shape of an ogive graph, particularly in the orientation shown as “cyma recta”. The words are closely related, and have been used somewhat interchangeably.

For comparison, here is the CDF of the normal distribution (the red curve is the standard normal): 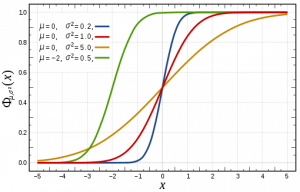