Having looked at the idea of complex numbers and how to perform basic operations on them, we are ready for one of the most important features for applications: their relationship to rotation. We’ll see this first in describing complex numbers by a length and an angle (polar form), then by discovering the meaning of multiplication and of powers in this two-dimensional world of numbers (DeMoivre’s Theorem).

We’ll start with this question from 2002:

It looks like Christie is just being introduced to the ideas of polar representation of complex numbers. I answered, mostly explaining what she was being asked to do:

This answers the second question, the geometrical interpretation.

I’ve used \(\theta\) (theta) in the picture, but continue to use Christie’s “x” in the answer; we commonly use x for the real part and y for the imaginary part, so using x also for an angle can be confusing. The representation using r and \(\theta\) is called polar form, equivalent to polar coordinates; the representation using \(a+bi\) is, in contrast, called rectangular form.

The angle \(\theta\) is often called the argument of the complex number, \(\arg(z)\), or (sometimes) the phase; the distance \(r\) is called the absolute value, magnitude, or modulus, \(|z|\). (The terms argument and modulus, are used in too many other ways in math, so I find them confusing; but we have to use them because many students do. In this case, we aren’t given any names for them, so I didn’t worry about that!)

Christie was told how to find a and b from r and \(\theta\) (“x“), as part of the provided formula, so I explained that part: 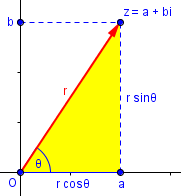 This is what was given in the problem: $$z=a+bi=(r\cos\theta)+(r\sin\theta)i=r(\cos\theta+i\sin\theta)$$ (Note that we often write i before any expression that might otherwise be misread.)

But actually expressing \(\theta\) itself in terms of a and b is tricky. I only suggested the general ideas, expecting further questions when Christie thought thought about it more. The issue here is that we can’t just say $$\theta=\tan^{-1}\frac{b}{a}$$ because that would always give angles in the interval \(-\frac{\pi}{2}<\theta<\frac{\pi}{2}\), and it doesn’t work for pure imaginary numbers where \(a=0\), or in other quadrants. In general, it can be any angle with the correct terminal ray, but sometimes you are expected to give the “principal value” of the argument, in some particular interval, commonly \(-\pi<\theta\le\pi\). So I couldn’t be sure what answer is required in her specific context. One way or another, you need to use various tools of trigonometry to find the angle given the tangent together with the quadrant, not a simple formula. (In computer programming, we define a special function atan2(y, x) that gives an appropriate angle in whatever quadrant is needed, but this is not generally taught in algebra or trigonometry. Rather, we teach a procedure I’ll be illustrating here.)

Here I’m suggesting two ways to make up examples. The first is to start with the rectangular form and find the polar form, which is what the problem explicitly asks for; my suggestions are among the few for which the angle you find will be “nice”: 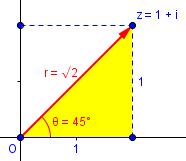 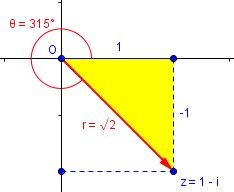 Notice that here we meet the question of what interval to use for \(\theta\). Although what I showed here is a valid answer, it is common to use a “principal value” for the angle, in the interval \((-\pi,\pi]\), so our answer would be 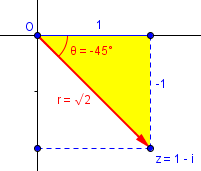 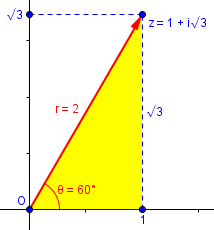 The last two parts are about special cases:

Again, there are two possibilities (and more if we make different choices for the interval).

Positive multiple of i (we can’t call this a positive imaginary number, because positive numbers are real!):

Negative multiple of i: 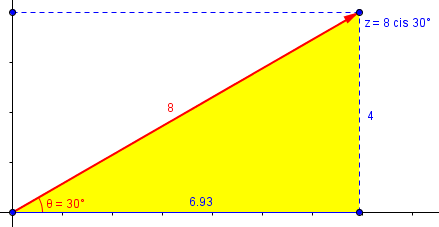 This notation is only needed between when you first learn polar form and when you know enough calculus that a more powerful notation, \(re^{i\theta}\), makes sense. Another notation that is used in some applications, such as electronics, is \(r\angle\theta\).

Multiplying and dividing in polar form

(Matt erred in saying “real parts” instead of “absolute values”, but probably meant the right thing!)

But to him this is just a rule, and rules taught without reasons can be confusing. What does it mean, and why in the world would you believe such a claim? He tried to work that out himself, and perhaps came close.

I’m not sure what Matt might have actually done, but let’s fill in the details!

This way, we never had to use actual angles, just the tangents, so quadrants didn’t matter. 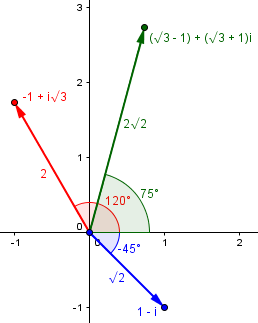 So what does multiplication of complex numbers do? It multiplies their absolute values (moduli) and adds their angles (arguments). 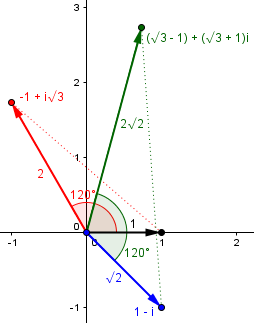 Observe the similar triangles, with the same angle, and proportional sides. This is what multiplication is.

Another proof and example

We can see that he has multiplied the moduli and added the arguments. He knows what to do, but wonders why this is multiplication.

(In what follows, I use the same letters with different meanings – shame on me!)

So we can directly derive this fact. We’ll be seeing still more next week of how trigonometric facts can be seen in complex number arithmetic. 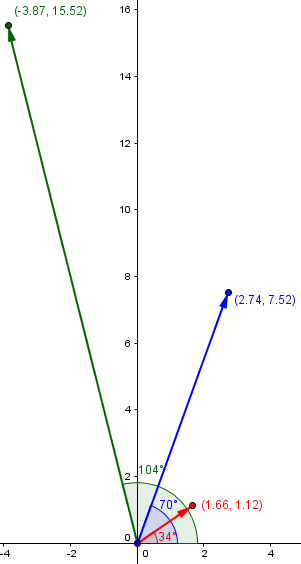 Now we can move on to powers and roots!

We could just multiply 7 copies of this number together; but that takes a lot of work. One way to do it efficiently is to repeatedly square, and then combine those results:

Can we do it more easily? Yes!

Here I have plotted the successive powers of our \(z\), from the first (\(z\) itself) to the seventh: 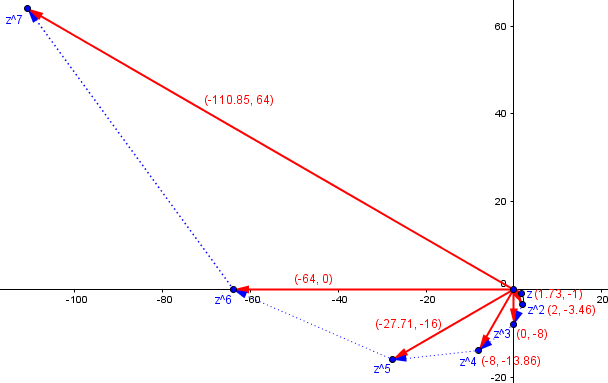 Proving the theorem by induction

Every good theorem deserves a proof, so we’ll end with this question from 1997:

We discussed induction in a series starting here. Evelina has presumably seen that the basis step, proving it true for \(n=1\) (or, indeed, 0) is true – which is obvious – but needs help with this inductive step.

Sound familiar? That’s what we used to prove multiplication. We’ll be doing that repeatedly here.

In its basic form, it is assumed that n is a positive integer; that allows us to use induction.

Incidentally, it turns out that this formula applies even when the exponent n is not positive, or even is not an integer. But that requires a different sort of proof. We’ll eventually get to roots of complex numbers; but first, next week, we have to look at a calculus perspective on all this, which unifies the ideas even more.