We’ve seen what complex numbers are; now we can look at what we can do with them. The basic operations are not hard, but have a few interesting features related to graphs. So that’s where we’ll start

Graphing will provide a basis for some of the ideas we see here, but also tie it back to last week’s explanation of what complex numbers really are, mathematically (i.e. ordered pairs). Here is a question from 1997: 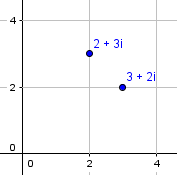 Such a graph is sometimes called an Argand diagram.

So we’re thinking of the complex numbers as being points on this plane. And that’s just what the construction we saw last week did. 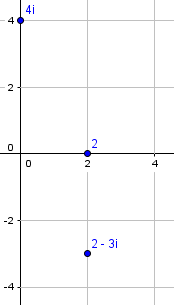 We’ll continue with this 2002 question:

The specific questions have a special feature (product of conjugates), which actually makes them simpler; but Doctor Ian chose to answer the bigger question of how all four arithmetic operations are done, not just these particular multiplications.

Just treat i as if it were a variable, distributing and combining terms as usual.

So, again, we just treat i as a variable, with the one additional fact that its square can be replaced with \(-1\), so in the final answer, no powers of i will ever be needed. Multiplication just means multiplying each term in the first by each term in the second, often called “FOIL”.

Now we come to the special case represented by the particular question that was asked, the product of conjugates (which we’ll see again later):

He takes an unusual approach to division, one that you might try for yourself if you had no idea what to do, but is not the final method we’ll see later:

Here he has simplified the equation by multiplying, to obtain a new equation. But for two numbers to be equal, the real parts and the imaginary parts of each must each be equal:

Now let’s look closer at addition, with this question from 2006:

Michael has seen a graphical approach to addition, but missed the explanation! I answered:

That is, when we add complex numbers, we just add the real parts, and add the imaginary parts. 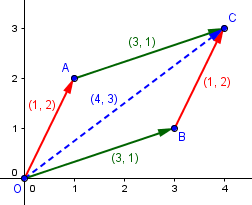 To do the addition, we can plot the two numbers (A and B), then complete the parallelogram to find the sum (C). 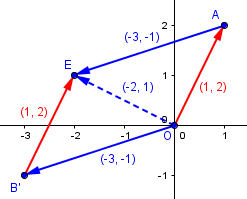 We can also think of it as the other diagonal of the same parallelogram: 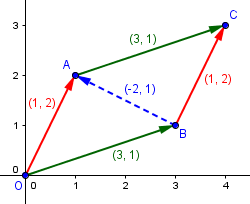 Before we dig deeper into division, here is a question from 2011:

This is the standard way to do such a division.

Incidentally, conjugates also do something interesting when you add them:

This shows that the sum of any number (here \(1+2i\)) and its conjugate (here \(1-2i\)) is a real number, because the imaginary parts cancel one another.

Next week we’ll see the geometric meaning of multiplication, and get another perspective on why the product of conjugates is also real. For now, it’s just an algebraic fact.

Doctor Luis answered, first explaining what we just saw about conjugates, and then continuing with a different example:

We’ll close with this question from 1998:

This is the absolute value as we are used to thinking of it, on the number line: 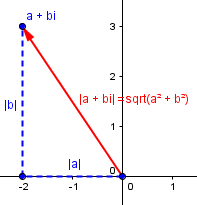 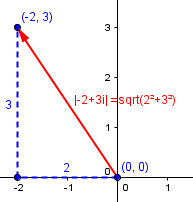 Next week we’ll see that a complex number can be described by its absolute value together with its direction, giving multiplication a new and important meaning.