The fact that multiplying complex numbers results in adding their angles, as we saw last week, provides a hint to what’s coming: Since that is exactly what exponents do (multiplying powers of the same base adds their exponents, as in \(a^m\cdot a^n=a^{m+n}\), maybe complex numbers are exponential functions of the angle? In fact, that turns out to be true. The amazing formula, discovered by Euler, tells us that $$e^{ix}=\cos(x)+i\sin(x)$$ And this means that \(e^{i\theta}\) is another way to write what we wrote last time as \(\text{cis}(\theta)\), with even fewer letters.

But why should we believe this formula? And how can we believe it? That is today’s subject.

I’ll start with this question from 1997:

Doctor Mitteldorf answered by providing several ways to think about it, including a proof:

We’ll be seeing two or three proofs; so why does he say it can’t be proved? Because until we write this equation, its left-hand side has no meaning! It’s a lot like what we’ve said about, say, multiplying negative numbers: We need to define it before we can prove anything about it. But the definition we give is the only definition that would allow everything else we know to continue working. So it really is a proof … not that this is abstractly true, but that we have to define it this way.

Compare to what we know

This third approach is just a plausibility check; it amounts to the idea I mentioned at the top, that the way multiplication works looks like an exponential.

What he’s saying here can be enlarged: This definition is compatible with DeMoivre’s theorem, which says that any power of a complex number multiplies its angle by the same number. We’ll see that again later.

Students often ask how calculators work out sines and cosines, and these series (though not what is actually used by calculators) are part of the answer. If you have never seen them, you may be convinced (remember, we aren’t doing proofs yet, just checking plausibility) by these graphs:

Here are the first one, two, three, four, five terms of the cosine series: 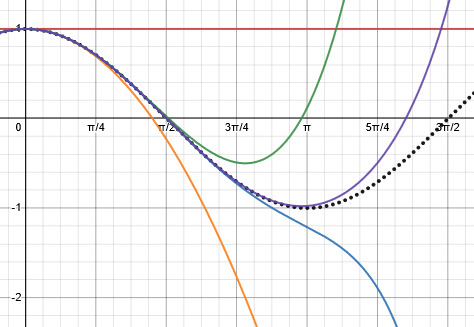 Similarly, here are the first one, two, three, four, five terms of the sine series: 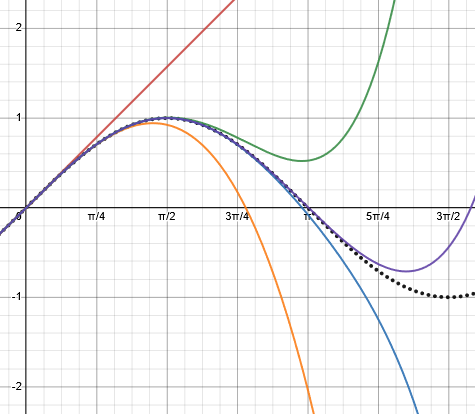 In each case you can see that just the first few terms approximate the curve closely for x close to zero, and the more terms you add, the closer you come for any x.

Now, if the series for the exponential function works for complex exponents, what will we get?

So, if we can expect the exponential series to “work” for an imaginary argument, then the formula is correct.

Differentiation: another check for compatibility

Doctor Mitteldorf had given a very similar answer to another question a couple months earlier:

There he included a mention of his purely calculus approach:

This will be another confirmation, rather than a derivation/proof; we’ll see the latter soon. Let’s do what he said:

Here’s another question from 1997:

Oliver has seen the derivation from the Taylor series, and is partly confusing the general formula and the special case. But does it depend on using radians?

Oliver wrote back, wondering about what is “arbitrary” and what is not:

Interestingly, Oliver was aware of a derivation, but also believed it to be unprovable. These concepts are hard to fully appreciate before you have a lot of experience with upper level mathematics; the idea he’d heard may come from the fact we saw at the beginning, that it is not technically a proof, but a (justifiable) definition.

Doctor Anthony replied with a calculus proof that amounts to reversing the plausibility check we did with derivatives:

Looking closely, we see that he is assuming that derivatives and integrals work as expected for complex numbers; a fuller foundation would be needed in order to make this more than just a proof that Euler’s formula is the definition that allows calculus to continue to work.

Also, if we keep going far enough to examine complex logarithms, we’ll run across the fact that the log of a complex number is multi-valued, which should be treated carefully. But such issues don’t invalidate the conclusion.

Questions about the proof

This proof was copied into our FAQ on this subject. The following question from 1999 asks about it:

What if you did want to work with an arbitrary z?

DeMoivre’s theorem, which we closed with last week, is so closely related to Euler’s formula that I (and others) sometimes forget which is which if we’ve been away from it for a while. Let’s close with a question from 1998 about it:

We proved this last time inductively, assuming that n is a positive integer. But now that we know Euler’s formula, we can do more:

It’s more than trig, but this is what we’ve “proved” above.

In other words, the rectangular form makes addition (and subtraction) easy; the polar form, however you choose to write it, make addition (and division) easy.

So DeMoivre is just a simple application of Euler. This higher perspective makes what was hard become easy. And we didn’t assume anything about n!

(Well, again, there is something hidden here. As we’ll see when we look at complex roots, everything becomes multi-valued. This is true even for square roots of positive real numbers, though there we are able to work around it by choosing a principal root. That can’t be done for complex numbers in a way that eliminates the ambiguity. But this fact is still as true as it can be!)