Square root of i, by algebra

We’ll start with three different perspectives on the same problem, \(\sqrt{i}\). First, from 2003:

This question was actually asked in 1997, but an answer to an identical question from Doctor Schwa was appended to the page, which makes a good intro:

Since we had to “invent” a square root of \(i\), shouldn’t we have to keep doing that? Amazingly, no!

This is what make complex numbers central to much of modern mathematics. They are the ultimate kind of number (in this sense … there are actually more, but they’re very different). 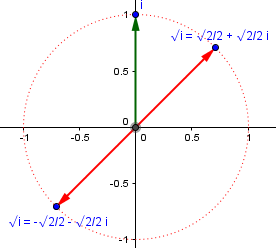 As usual, there are two square roots. More on that later!

For another presentation of this approach, starting with the definition of complex numbers as ordered pairs, see

For a different approach to the algebra, see

Square root of i, by DeMoivre

But algebra isn’t the only way, or the most powerful. Here is Doctor Anthony’s brief answer to the 1997 question: 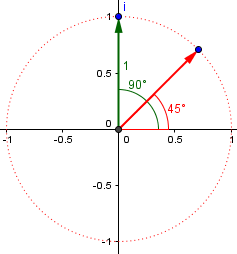 But .. what about the other root? For some reason he omitted that. (We’ll see him get this right in a later answer!)

This is where roots get tricky using this method. Recall from trigonometry that any angle has “coterminal angles” that start and end in the same place, but go around different numbers of times. Our 90° angle could also be called 450° (by adding 360°), or -270° (by subtracting 360°), and so on. When we divide those by 2, we get 225° or -135°, respectively. Either of those gives the same second root: 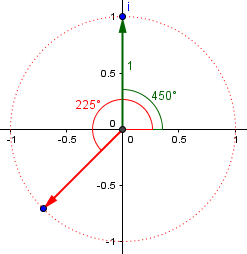 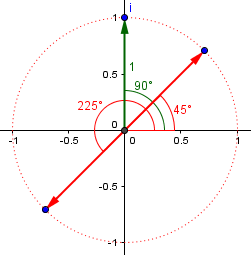 Note that if we square either of these, we get i, by doubling the angle.

Square root of i, by Euler

Here is yet another version of the same question, from 1999:

This is an interesting point: Not only are there two roots, but we can’t call one of them the principal root, in the same way we do in saying that \(\sqrt{9}=3\text{, not}-3\). One reason is that neither root is positive, which applies only to real numbers, so we can’t use the rule we are used to; another is that whatever rule we used, it would not always be true that \(\sqrt{w}\cdot\sqrt{z}=\sqrt{wz}\) for all complex numbers w and z. We could arbitrarily choose to call one of them the principal root (and do, for some purposes), but that doesn’t make everything work as expected, as it does for real numbers! This will be the topic of another post someday.

In particular, when textbooks say to write \(\sqrt{-1}=i\), it is just for convenience, and doesn’t mean that is really the root.

But we aren’t finished, are we?

This amounts to the proof of DeMoivre we saw last time. But don’t forget to adjust \(\theta\) to be in the right quadrant.

Square root of 3+4i, by algebra

How about the square root of a complex number other than i? Here is a (poorly titled!) question from 2002:

These are the same equations we saw before, but with different constants on the right, which make us do a little more work this time:

The substitution left us with a variable on the bottom, so we cleared that and got what is sometimes called a biquadratic equation. 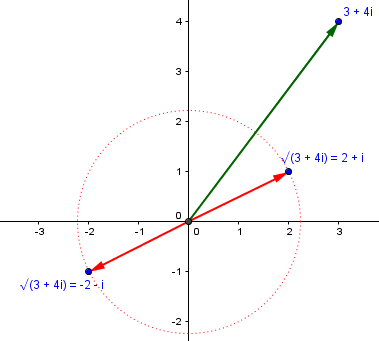 We could also do this using Euler or DeMoivre.

Enough of square roots; let’s take it up a notch, with this question from 1997 on cube roots:

Presumably Jared found the one answer just by recognizing that \((-i)^3=(-i)(-i)(-i)=(-i)(-1)=i\). He recognizes that the cubic equation should have three solutions (though sometimes there can be fewer due to multiplicity). We’ve seen pairs of square roots; how can we find triples of cube roots?

Doctor Anthony answered, focusing first on the general idea of getting three roots, rather than the specific example of \(\sqrt[3]{i}\):

If we didn’t know to expect three roots, we would just keep going until we found that we were repeating. So, rather than explicitly memorizing how many roots there are, we just have to keep the periodicity of the trig functions in mind.

Cube roots of i

How about the cube roots of i? Here they are, by the same sort of work: 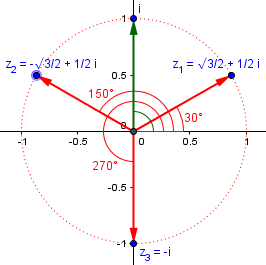 I don’t believe I’ve ever done that before!

Now let’s put it all together (a higher root of a complex number), with this question from 2005:

This time the numbers don’t work out quite as nicely as for our previous examples, so this is more typical. But notice that he doesn’t just take the 1/5 power. Instead, he solves an equation, by setting moduli and arguments equal, much as we have elsewhere set real and imaginary parts equal. (The same thing would work if you used DeMoivre but were only allowed to use integers, because the general case had not been proved yet.)

He finds the general solution to the trigonometric equation, and takes the first 5 solutions. 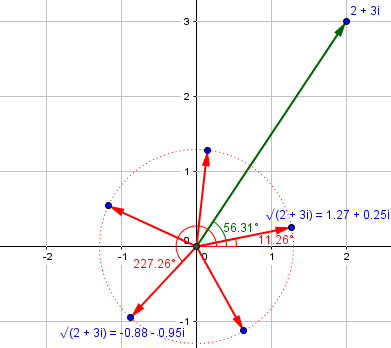 Now look at that last picture. There are two parts to finding these roots. We can find the first root by just dividing the argument of the radicand by 5: 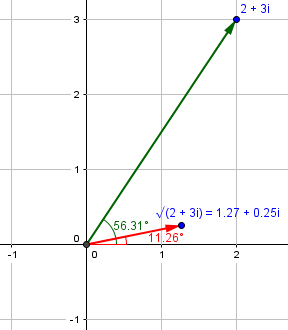 Then we can find the others by multiplying this by the five “fifth roots of unity” (“unity” being a name for “1”), which are 1 and four others: 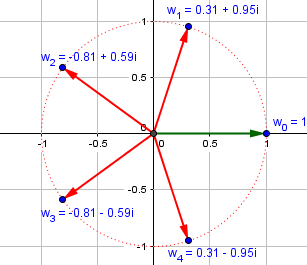 We can talk similarly about the nth roots of unity for any positive integer n; they form an n-gon inscribed in the unit circle.