This week we look at questions about how likely it is that you can make a triangle out of three random pieces of a stick. As always in probability, the first issue comes in deciding how the process is to be done (that is, what does it mean to break a stick randomly?); we’ll also see multiple methods for solving the same problem, which is always interesting. To keep this post from being too long, I’ll be showing two methods for solving one interpretation of the problem here, and then show a third method next week, along with a related method for a second interpretation.

Our first question is from 1995, months after Ask Dr. Math started:

How likely is it that you can, if you make the breaks randomly? Try making a guess before reading ahead; do you think it will be rare or common?

We’ll be spending most of our time on the second, “two-at-once” interpretation; next week we’ll see a variation of the first, which seems most natural to me: “break, then break the longer piece again”.

Choosing both locations, then cutting

In reality, if you broke a stick “randomly” (that is, according to informal ideas of randomness), you would probably have a bias against leaving a tiny piece, and would tend toward breaking into approximately equal parts – especially if you were literally breaking them, which requires some leverage. We’re talking instead about actual random choices, which might be accomplished by picking a random real number between zero and one, marking the stick at that location, and repeating for the second mark before actually breaking or cutting.

But before starting the actual work, it’s interesting to make some comparisons:

By similar reasoning, the probability in “break the longer”, as we’ll see, turns out to be still higher.

The condition for making a triangle from three lengths a, b, and c, is the triangle inequality, which can be applied to each of the three sides: $$a+b>c\\b+c>a\\c+a>b$$ This amounts to the fact that a straight line is the shortest path between two points.

Finding the probability as an area 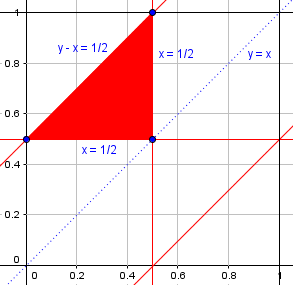 We’ll be seeing this graph, in its complete form, soon.

We’ll get to that at the end of next week’s post. First, we’ll finish this solution for the problem we’ve been working on, and two more.

Solution A: In two dimensions

The next question, from 1997, assumes our two-cut interpretation:

This time the stick length is given as 12 inches rather than 1 foot, but that has no effect on the problem. And the answer is correct, though we don’t know Chez’ method. 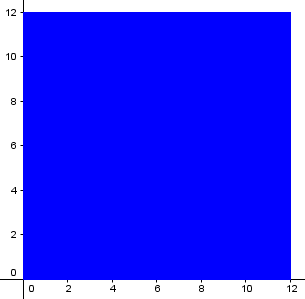 All of this is the equivalent in inches of what we already did in feet: 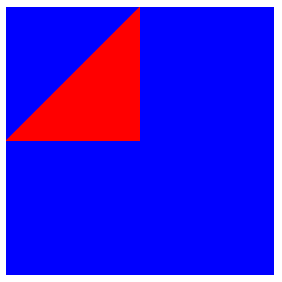 Here is the square, with the event “triangle is possible” in red, showing a point P(x, y) representing a possible triangle:

Here is a point representing an impossible triangle:

(These pictures come from a GeoGebra sketch I made that plots the point P and makes the triangle for any positions of points X and Y.)

Solution B: In three dimensions

Here is a 2001 version of the same question:

This time, rather than taking x and y as locations on the stick/rope, we take x, y, and z as the lengths of the three pieces, so that \(x+y+z=1\). That is the equation of the plane containing our triangle T, which therefore represents all possible sets of (positive) lengths resulting from cutting. It is reasonable (though not proved here) that probability is proportional to area. 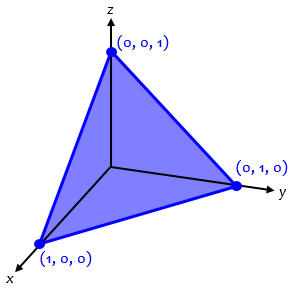 Here is the midpoint triangle: 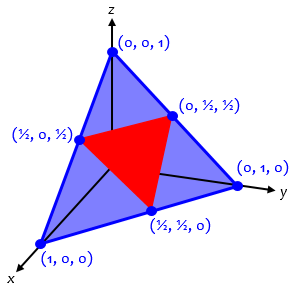 After that, we’ll see the same technique applied to another interpretation of the problem (which is why I want to put them together.)

1 thought on “Broken Sticks, Triangles, and Probability I”