Last week, we looked at two solutions to the problem of finding the probability that you can make a triangle using three pieces of a stick, if we cut it at two independently chosen, random locations. This time, we look another solution to that problem, and a similar solution to the version in which we choose the locations of the cuts one at a time. This will also give us a good opportunity to see how errors happen in probability problems,

Two cuts at once

The contradictory answers presumably were for different interpretations of the random breaking, though perhaps some were just errors. And you may find that what follows looks more complicated than our others, but the underlying idea is very simple and elegant.

Here is a sample first cut:

Where could the second cut be in order to make a triangle? Give it a little thought yourself, then continue.

Here is this example; the green zone shows what locations for the second cut, y, are acceptable, and the four examples below it show one case in each red zone and two in the green zone, to make it clear what goes wrong, or doesn’t: 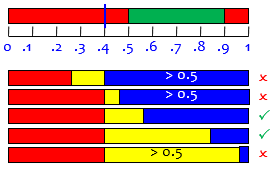 How about the second case?

Here is this example, similar to the image above: 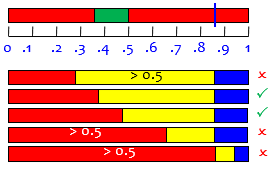 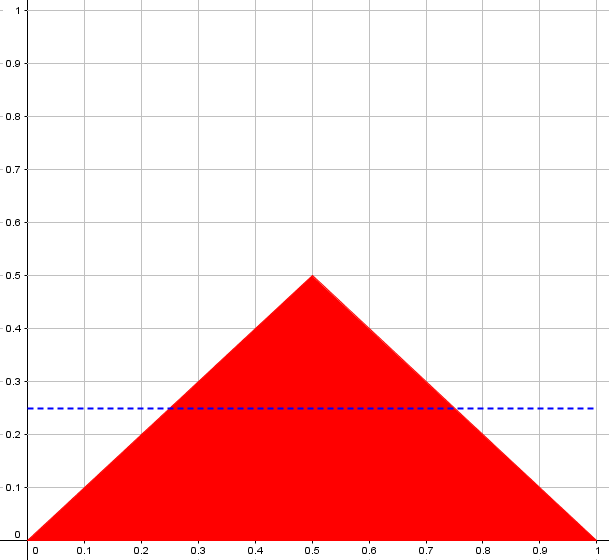 The average probability, over all first cuts, is the blue line, at \(\frac{1}{4}\). And if you compare this to the graph from the first method, you’ll see that all the red pixels have just fallen in a heap on the bottom; the area is the same.

Cut once, then cut the larger piece

The next month, still in 2007, we got a question explicitly about a different version of the problem:

Doctor Greenie answered this one, too:

He starts with a fact he explained last time:

Rather than take x specifically as the location of the first cut, he takes it as the length of the shorter piece from that first cut. If we took x as the location, as before, we could replace x in what follows with \(\min(x, 1-x)\), and let x run from 0 to 1 rather than from 0 to \(\frac{1}{2}\).

Here is a picture of this first example; I’ve put the length x at the right this time, so that our second cut can be anywhere to its left, but in order to make a triangle, it must be in the green zone: 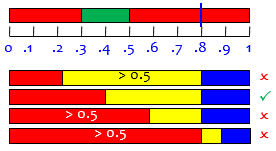 Here is a picture of this second example: 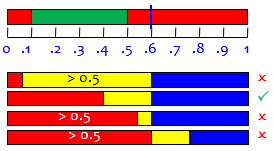 The integral is the calculus way to find the area, as in the first answer above we found the area geometrically. The concept is identical in both cases, though we couldn’t keep it geometrical this time.

Here is a graph of the probability, if we take x as position and allow it to vary from 0 to 1 (to make it more like the graph in the previous problem); Doctor Greenie’s version is just the left half of this, which doesn’t affect the result: 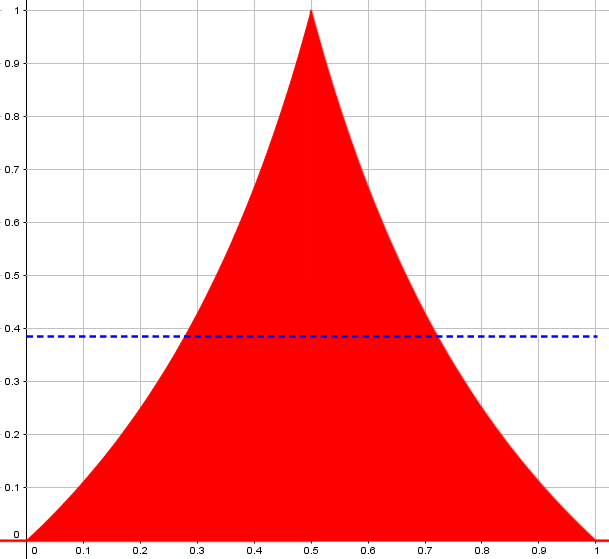 If you read the original page, you’ll see that my name is included at the bottom. That is because there was an error in the original answer, which gave half the correct answer (by failing to divide by 0.5); in 2008, and again twice in 2014, people wrote to us telling about simulations they had done that contradicted the answer, some pointing out the cause of the error. What you see above is the correct version that I proposed.

The last of these was particularly interesting. Abhigyan had read Doctor Greenie’s first answer in this post, giving the answer 0.25, and said this:

So his result agreed with Doctor Greenie’s original answer to the second question, though he thought he was simulating the first! He offered to send me his spreadsheet; I replied:

When he sent his spreadsheets (one with result 25% and the other 19.3%, with a comment that I was right about his using a different scheme originally), I looked into it more deeply and wrote back:

Abhigyan’s original version (19.3%) was in fact doing the equivalent of Doctor Steve’s first interpretation from last week’s post, randomly choosing which half to break. And that was the problem that Doctor Greenie accidentally answered.

This demonstrates how easy it is to misinterpret a problem like this, even when you are coding a simulation to actually carry out the process. This is why I particularly like solving any probability problem in two ways before committing myself to the answer!