Is there an intuitive proof?

I’ll start with the new question, from Ethan in mid-August:

Here are links to the proofs I have read.

I looked through the references and saw mostly familiar material, similar to what we have said in the past; but none said what I had in my mind. I couldn’t recall whether I’d ever put my thoughts into written form. But this could be a chance to do so!

This is a fun question, and I won’t be surprised if another of us has ideas to add. But I want to take a shot at it.

First, we need to clarify what you are hoping for. You ask for “an intuitive proof for this relation without relying on the equation of hyperbola or relying on a picture ‘proof’.”

I think we can provide an intuitive understanding, but it will not be an actual proof; and at some point we have to bring in the equation, because that’s where the idea of b comes from! And to me, nothing is intuitive if it doesn’t involve a picture!

As he’d mentioned, b commonly arises not from our initial geometric conception of the hyperbola, but “pops out of” the equation as we derive it, and is only then given meaning. But most derivations don’t actually relate the formula to its geometrical meaning. What we want to do is to make that connection between the equation and the picture, without merely declaring it to be so, which I think is what Ethan was seeing.

I looked through your links to see if any have the picture I have in mind, and the third one does; but it uses it within what you are perhaps finding too complicated a pile of algebra to be intuitive. I’ll probably be saying some of the same things, but hopefully in a context that will feel more natural.

I found (in my list of potential blog topics from the Ask Dr. Math archive) a typical derivation of the equation of the hyperbola here:

(To read it, you’ll have to sign up for a free account with NCTM; they’ve hidden the site behind what I call a “freewall”.)

This is a warning I have to give these days, and is why links on our site have not yet been updated to give the new locations; without the explanation, people have assumed the link was bad. And when I say the site is “hidden”, I mean it: Though they changed from a “paywall” requiring membership, it is still impossible to search for archive pages, so the only way I can find them is if I have previously done so and put them on my list of future topics.

Our derivation of the formula

To make it easier for readers, I’ll insert that 1998 page in its entirety here:

Doctor Jerry answered by deriving the equation of the hyperbola:

You may recognize parts of this from Ethan’s description. I quoted this to give us a common starting point.

Other versions of the derivation, by Doctor Rob, can be found at

Continuing my answer to Ethan,

As you’ve seen in other proofs, Dr. Jerry starts with the definition of the hyperbola:

Two points, called foci, are given; they are 2c units apart. A hyperbola is the locus of all points for which the difference of the distances to the foci is a constant 2a, where 2a < 2c.

Here’s a version of the picture containing only what we know to start with: 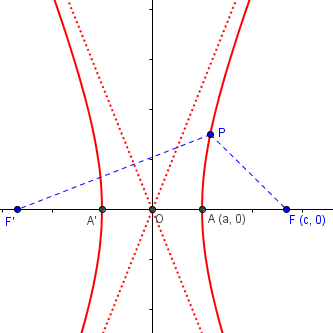 In the course of the work, he finds, as you said, that one expression occurs more than once, and says,

This is where many people feel it starts to feel circular! But we are just defining something called b here for convenience. At this point, it has no meaning in itself.

There is as yet no “b” in the picture! But whatever it is, that Pythagorean formula applies to it. And if we draw in such a triangle, we get this: 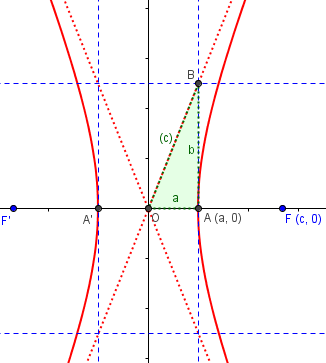 After finishing, he adds,

Fortunately, the constant b is interesting. If you draw about the origin a rectangle that is 2a by 2b and then draw its diagonals, the diagonals are the asymptotes of the hyperbola.

Doctor Jerry didn’t prove his claim about the asymptotes; my claim is not quite a proof, but is intuitive. The larger x and y (and therefore both fractions on the left-hand side) get, the less difference the 1 on the right of the hyperbola’s equation matters, and it might as well be zero. Solve the resulting equation for y, and you get the equations of the two lines. We’ll see more on this later.

Why should that triangle involve c?

There is as yet no reason to think that OB should have length c, apart from the algebra. Does it make sense?

That’s the proof; my interest here is to think about why this result should be intuitively reasonable. So I’ll do a little hand-waving. (But there’s nothing up my sleeve!)

This is where I draw a picture: 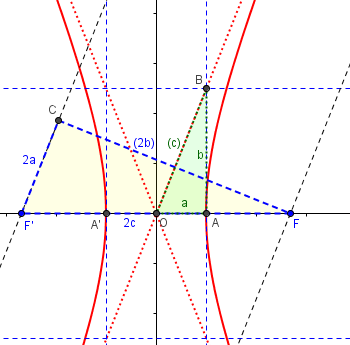 The foci are F and F’; the vertices are A and A’; the hyperbola is in red, and its asymptotes are dotted red.

Values in parentheses are not initially known.

We aren’t going to assume what we found in the proof; in particular, we’ll define b not by the expression we stumbled across, but by placing point B on the asymptote, so that its slope is b/a.

The green triangle OAB has sides a, b, c; but what we wonder is, why would the hypotenuse be c? So I’m not declaring yet that it is; our goal is to show that. On the other hand, a and b are where they are by definition: a is defined as half the distance between the vertices, and b by the fact that b/a is the slope of the asymptote OB.

We’ll be seeing fuller proofs of the asymptote below. For now, we’re staying intuitive.

Now, suppose a point P is very far out on the hyperbola, approaching the asymptote. Segments FP and F’P will be nearly parallel to the asymptote, so they will approach the parallel lines I’ve drawn through F and F’. The definition of the hyperbola says that the difference between the distances FP and F’P is 2a; I’ve marked that as the length of F’C on the yellow triangle.

Can you see that the green and yellow triangles are similar (since they are right triangles with a common angle)?

So the yellow triangle is exactly twice the green one. And we can now fill in the “c” on the latter.

Incidentally, my picture also shows that b is the distance from a focus to an asymptote, which I’d never noticed until now!

This definitely helps! I had trouble understanding where F’C came from until I visualized sliding FP over and onto F’P; then, it was clear why F’C is 2a. Your picture looks similar to the picture in the link with the limit argument, but what helped was connecting b to the asymptote and showing the two similar right triangles.

Thank you for your help. I really appreciate it.

To be honest, I was a little concerned that I hadn’t explicitly stated how I decided that F’C = 2a; that was essentially because some intuitions are easier seen than explained. I’m glad you got it; and perhaps giving you that little bit to work out for yourself helped the explanation work for you!

I’m not sure whether I’ve ever written up these ideas before, so I’m glad I had a chance to!

More from the archives

In preparing for this post, I discovered a 2019 answer containing links that were not in the list where I found Doctor Jerry’s explanation. Let’s look at those.

First, we have this question from 2007, nearly identical to Ethan’s except that it doesn’t ask for an intuitive explanation:

The details, of course, are in Doctor Jerry’s derivation.

The difference, of course, is that the semi-minor axis is visible in the graph of the ellipse; and Don’s “special points” form the right triangle we need: 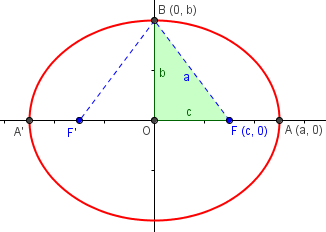 Finally, we have this 2011 question about asymptotes:

(His second equation appears to be for a hyperbola with its major axis vertical, which he doesn’t otherwise mention.)

This time, we want a real proof. The trouble is that an asymptote like this is not quite the same as a limit (which would be a number, not a slanted line).