This week we have a short discussion of a question that takes a basic concept one step further: How do you graph an equation on the plane, that contains only one variable? It’s a simple question when applied to linear equations, but takes on new dimensions when we generalize it.

Equations with only one variable

Here is the question, from early October:

I have two questions.

Or, drawing graph of any single variable equation in Cartesian plane is not possible.

Which interpretation is correct?

2) In the above context is it possible to draw graph of any quadratic equation i.e., second order single variable equation. Plz help.

Debkanta has made a small algebraic error (\(x+3=0\) is equivalent to \(x=-3\), not \(x=3\)), but that doesn’t affect the main question: What does it mean when one variable doesn’t appear in the equation at all? And the second question takes it to a new level.

Doctor Fenton was first to answer:

Thanks for writing to the Math Doctors.

The first interpretation is correct if x + 3 = 0 is the entire equation you want to graph. The graph of the equation x + 3 = 0 is a straight line parallel to the y-axis (but this line is x = -3, not 3). Since y doesn’t occur in the equation, for every value of y, the point (-3,y) is on the graph, since the coordinates of this point satisfy the equation for any value of y.

In fact, we can rewrite the equation so that y is present: \(1x+{\color{Red}0}y+3=0\), which fits the general form for any linear equation in two variables, \(ax+by+c=0\). But the coefficient 0 means that changing y has no effect on the truth of the equation; so once we have a point on the graph, every point directly above or below that point must also be on the graph. That’s what makes a vertical line.

In that context, there is no second variable to think about, and everything is as it should be..

Here is the graph of the same equation as an equation in two variables, which is Debkanta’s question: 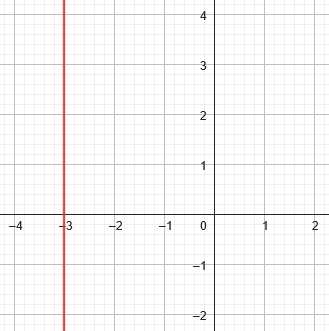 The second suggestion (replacing 0 with y in the equation) was wrong:

So this is a different equation with the same x-intercept, but otherwise unrelated. 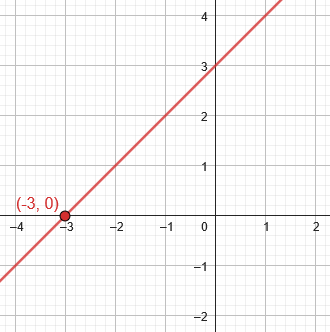 No other point on this graph satisfies the equation \(x+3=0\).

As to the second question (about quadratic equations in one variable), we can first consider the general equation of which this will be a special case:

The general quadratic equation in two variables has the form

Otherwise, the graph is a conic section: a circle; ellipse; parabola; or hyperbola. 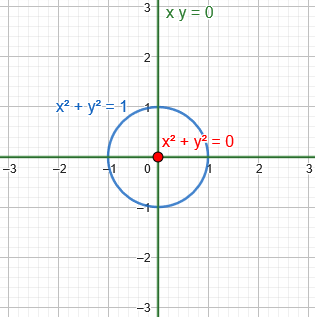 All but the circle are “degenerate conics”, which fit the general equation though they don’t have the shape we expect for a full-fledged conic section.

As we’ll see in more detail below, the case with only one variable is just another degenerate conic.

Here are some more typical quadratic equations for comparison, which have both variables, showing both their general form and a specific form: 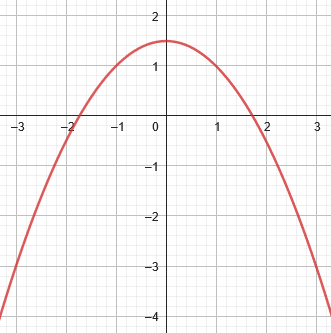 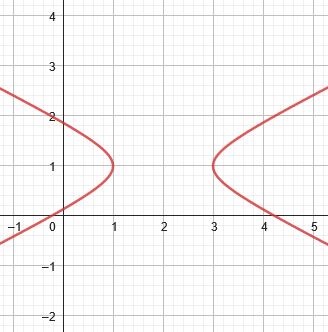 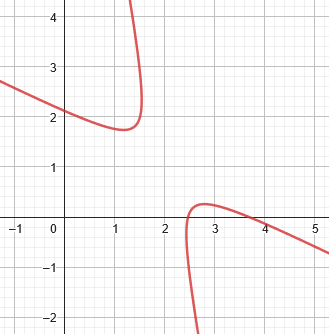 (That xy term makes it interesting!) 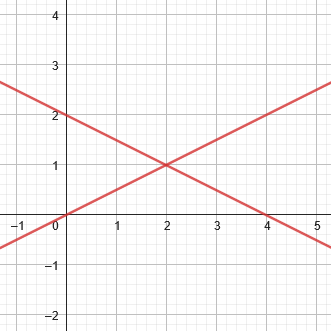 This last one is another of the degenerate forms; notice how it is related to the first hyperbola.

What the missing variable does

Doctor Rick provided a slightly different perspective on each question:

Hi, Debkanta. Doctor Fenton answered your questions, but I’d like to emphasize how his answer applies, particularly to your second question. You said, first:

The answer was yes.

If we are thinking in the context of equations in two variables, but an equation is missing a variable, then the missing variable has no constraints; it can take on any value. The equation gives us the allowed value of the other variable, and together they define a straight line. Thus, x + 3 = 0 tells us that x must be -3, but y can have any value. The locus of points with x coordinate -3 and any y coordinate is a vertical line.

A locus is the set of all points that fit some description; that’s what graphs typically show, and is a good way to think about them. Does a point make the equation true? Then it will be part of the graph.

Either variable might be missing. If an equation has only y, with x missing, then the value of y is fixed, but x can take any value, resulting in a horizontal line. Here is \(y+3=0\): 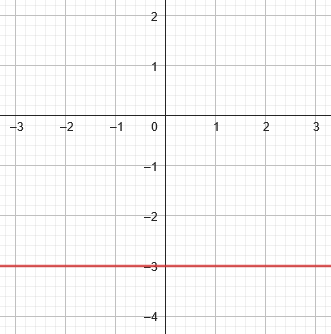 We tend to think of y as the second of two (or more) variables; but it is entirely possible to have a context in which y is the only variable, in which case the graph would just be

again! (Algebra doesn’t care what name a variable has.)

Quadratic equations in one or two dimensions

2) in the above context is it possible to draw graph of any quadratic equation i.e., second order single variable equation.

You’re asking about equations like x2 + 2x – 3 = 0, right? This equation has two solutions, x = -3 and x = 1. This is usually all we’re looking for. But if we are considering this equation in the context of equations in two variables, then we’d do the same sort of thing I just described for linear equations. There is no constraint on y, but x is constrained to the two values -3 and 1. Thus the graph of the equation consists of two vertical lines, x = -3 and x = 1.

Commonly, such an equation is considered in a context where x is the only variable under consideration, and we just solve for the value(s) of x. In this example, we factor and find that \((x-1)(x+3)=0\), so that \(x=1\) or \(x=-3\). These are simply real numbers, which can be placed on a number line:

Two lines are one of the degenerate conic sections, as Doctor Fenton had mentioned.

We could also, again, have a quadratic equation containing only y, which will typically result in a pair of horizontal lines. Here is the graph of \(y^2-y-6=0\): 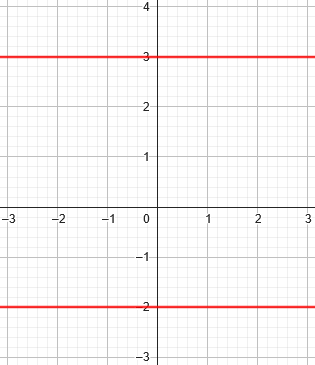 None of this is what you normally think of as the graph of a quadratic equation! That’s why I find this question interesting, even though in a sense it is all trivial – but not to the thoughtful student.

Does it make any sense to do this?

where at least one of the coefficients a, b, or c is not 0. Suppose we choose b = c = e = 0; then the equation above reduces to

So equations like this might arise in situations where both variables are in use, but one doesn’t happen to be present in one particular equation. 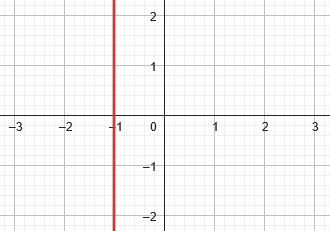 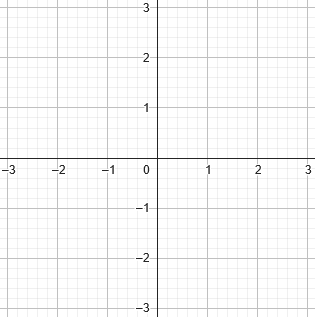 (That equation has no real solutions!)

Thanks Dr. Fenton and Dr. Rick, I have no doubt now and I have explained the concept to my son also. He is also quite satisfied. In fact I always allow my son to ask many questions and I also ask questions that come in my mind. In one such discussion above confusion came in my mind. Thanks again for your reply.

That’s good to hear — both that you both understand, and that you are helping your son the way we would!

Feel free to ask us more like this, and even to encourage your son to communicate with us directly.

Let’s take it one more step, and think about equations with one or two variables graphed in three dimensions.

Consider that equation \(x^2+2y-3=0\), which we saw above as a parabola; it has only two variables, but if we treat it as an equation in three variables, then the third variable, z, is unconstrained, resulting in a parabolic cylinder: 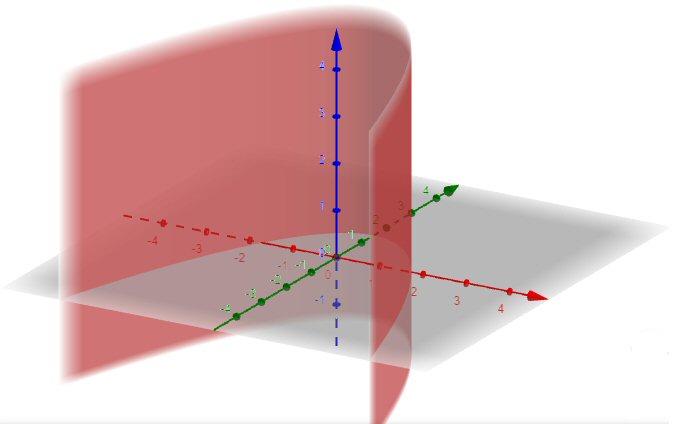 In the xy-plane (red and green axes), we see the parabola we had before, with a vertical line passing through each of its points because z can take any value.

And the equation \(x^2+2x-3=0\), with only one variable, does not constrain either y or z, so we get a plane at each of the two values of x that satisfy the equation: 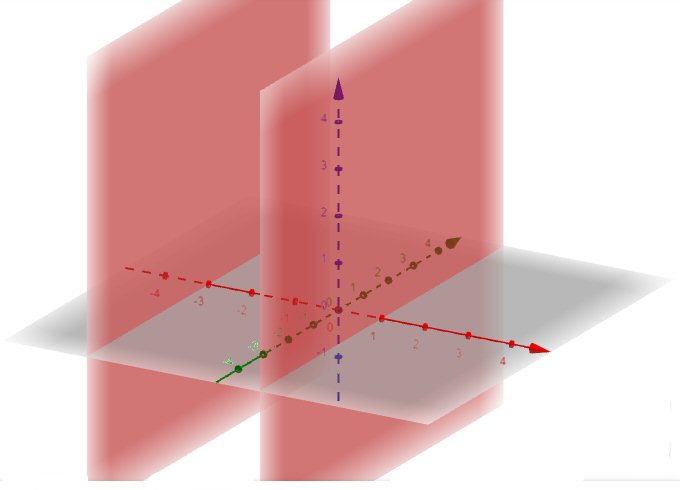 This is just an extension of Debkanta’s idea, and it illustrates the power of missing variables!