There are so many ways to find a Least Common Multiple that I had to omit one method we have been asked about several times. This one doesn’t require finding prime factors, but focuses on division by whatever factors you see.

Divide everything by whatever works

The first reference to the method I have found in our archive was in 1997:

This is actually a spectacularly easy example, as 25 is itself a multiple of 5, so that is the LCM. But the question is mostly a request for a general method. Doctor Sebastien answered with a method different from the others we’ve seen:

Here we saw that we could divide both numbers by 5, so we did that, and were left with 1 and 5. Now we divide only the one number that can still be divided; the LCM is the product of all the divisors we used.

Let’s go a little beyond the example he gave …

One way to organize this is to pile one division on top of another:

Notice that we don’t have to divide by primes; I saw 10 as an obvious divisor, so I used it. Also notice that at the end, I didn’t really have to divide by the 5 and the 6, as long as I saw that there were no common divisors left. I could have just used them as the last factors:

This is a more refined version of the method, which we’ll be seeing below with even more added features.

A 2012 question specifically asked about this method:

Here we are flipping my stack of divisions upside-down, but it’s the same idea. Doctor Ian answered, first showing his understanding of the method (which was in fact well explained):

What Zoe described as “the other factor” on the inside can be just as well called “the quotient”, the result of dividing by the factor on the left. The LCM is \(2\times3\times2\times3 = 36\), which is indeed the LCM.

So, why does this work? He compares it to what I called Method 2b last time, listing prime factors of each number and pairing them up:

Whether you divided separately by the common prime factors 2 and 3, or all at once by the common factor 6, you will still get the same result in the end.

The benefit of the method is that you don’t have to find prime factors first; you can just take it as you see it.

Why it’s not the best way

The downside is that you have to see common factors, which is not always easy without using primes:

What happened here is that there were (intentionally) some larger prime factors that you might not think to try.

On the other hand, you are in fact focusing on common factors, and pulling those out is just what you need to make a common multiple as small as possible.

Exactly a point I was going to make! When there are larger primes to discover, you can just as well miss them while looking for prime factors. (This is where the Euclidean algorithm comes to the rescue, for very large numbers.)

Doctor Ian had more to say:

If I were looking for those remaining common factors, I would probably be going through a list of primes and trying one after another, whichever method I was using. That work is not shown in either method, usually.

But how about that matter of “understanding”?

The FTA tells us that we can always find a prime factorization, and there is only one correct answer (as long as you ignore order, or always write the primes in increasing order).

Primes are the “bones” of numbers, and seeing them is very helpful!

Now Zoe got it:

So we’ve seen both how the method works, and why it is not the best. But it’s still yet another tool in our toolbox, to be used when the numbers are fairly small; if we are unsure whether we’ve found all the common factors, it’s time to pull out the x-ray machine!

In 2006, a student had submitted what amounts to the same method:

I replied, comparing it to the way we simplify fractions in small steps rather than having to find the GCF and simplify all at once:

When I say that is what she is doing, I mean this: Her work is just what you’d do in simplifying \(\frac{12}{8}\) by dividing both numbers either by 4 all at once, or by 2 and then by 2 again. The GCF is the product of all the numbers you’ve divided by. The new thing is that the LCM is the product of that and the numbers in the simplified fraction!

This example is more typical, and shows the value of the method (when the final numbers are small enough to be sure they are relatively prime).

We can relate this to the Venn diagram method from last time: 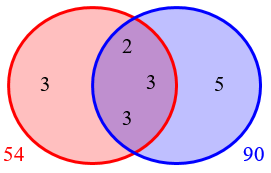 The intersection (GCF) is the left column, and the left and right parts are the bottom row. Their product is the LCM.

In 2010, Michelle took me up on the idea of extending the method to three numbers, in addition to asking for more explanation:

I answered, “showing the bones” as Doctor Ian did:

Applying a method to a more visible case (doing it under x-ray, we might say) can be a good way to observe how it works!

Extending it to three

By this time I had taught a Math for Elementary Teachers course, whose textbook included this method, so I had an answer (which, it turns out, was hidden in the 1996 method we started with, which I had probably never seen):

It’s important to continue until no two numbers at the bottom have any common factors.

I do think that method is clearer and surer; but this method still has interest.