Summary of the three main ways

We’ll start with this quick question from 1998:

Doctor Rob answered, starting with how to handle more than two numbers:

We’ll see ways to handle more than two numbers at once later, but it is never necessary. That can keep things (relatively) simple.

We start with what I’ll call Method 1, “Listing multiples”:

This, like the first method for GCF, applies the definition directly, and so is important for one’s first exposure to the concept. But it works best when the LCM will be small.

Our Method 2 is “Prime factors”:

I’ll be showing four variations of this; this version is the last and most sophisticated. We’ll be seeing why it works.

(Recall that GCF and GCD are names for the same thing.)

This is based on the fact that $$\text{LCM}(A,B)=\frac{AB}{\text{GCF}(A,B)}$$ Below, we’ll see why this works. For very large numbers, you can use the Euclidean algorithm to find the GCF – this method lets us use that very powerful tool to “kill two birds with one algorithm”.

Now for details, which will come mixed together in various answers we’ve given.

The next question asks specifically about the prime factor method (2), but the answer starts with the first:

Doctor Terrel first shows that merely listing multiples gets difficult even for three small numbers, though it is very important for understanding:

This illustrates the method well, and with three numbers at once. But when the LCM is large, you can see how hard it can get; that’s where primes come in.

There are several different ways to use prime factors, and he now gives the one that I think is easiest to understand initially:

Here we start with the prime factorization of one number, and then try to add in prime factors as needed to make our number a multiple of all the numbers we have.

More on the cumulative method

For more on this approach, consider this 2003 question:

We can picture the process this way, where we start with the set of factors for 6, then add in the 5 so that we can make 10, but reuse the 2: 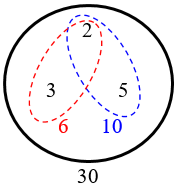 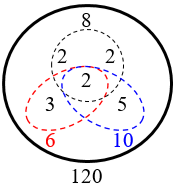 We want to know what times 8 gives 120; the answer is just the product of all the factors outside of 8, which are 3 and 5; and likewise for the others.

We’ll be looking at this use of the LCM in the future.

This is a common reason to use the LCM; the question ultimately is just about calculating the LCM of 25, 30, and 35.

Doctor Ian answered, first with a second variation of the prime factor method:

Here we list the prime factors in a row, grouping those that are in all the numbers, and using each of those only once to form the LCM. As we look at other versions, it will become clear why this works; I am calling it the “list” method because we write out lists of primes, and use only one from each column.

An illustration of cumulative method (2a): shopping for factors

Dustin needed a little more help to see why we do this:

Doctor Ian had a nice illustration, likening the cumulative choice of prime factors to shopping:

Keep in mind that we just want enough to be able to make any one of the numbers 25, 30, and 35, not all of them at once! For that, we’d need the product of all three entire numbers.

For a discussion of the last point (how some primes could be “wasted”), see:

This unarchived question from 2014 shows a method treating the lists of prime factors as sets in a Venn diagram:

I answered, having seen this method in a Math for Elementary Teachers class I had taught:

Can you see how this explains Method 2b, where we collected duplicated primes and used them only once each?

For a puzzle that uses this method (at a time when I hadn’t yet seen it), see:

Here is another question that elicited two methods:

Doctor Rob first gave another variation on prime factors (the same one we saw in his answer to the first question); I’ve fixed a couple typos:

As with the GCF, very large numbers make factoring difficult, so something easier is needed. We already have an efficient way to find the GCF under these conditions; and it turns out that we can use that to find the LCM. Doctor Rob continued:

For more examples of the algorithm, and why it works, see the last post.

For a proof of the relationship used here, see 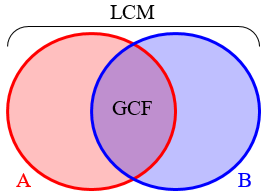 In summary, we have 6 methods, ultimately, though four are closely related:

1 thought on “Many Ways to Find the Least Common Multiple”