Last time we looked at what improper fractions (and, to some extent, mixed numbers) are. There are many situations where we need to rewrite one of these forms as the other – mixed numbers are most convenient for talking about numbers in real life, while improper fractions are easiest for doing operations like addition. Let’s look at some questions about those conversions.

From improper to mixed

Many people who are good at math (including basic arithmetic) agree: If math is just about memory, then it can be forgotten. When it is based on understanding, it will last. (I have to work to remember a stranger’s name; a friend, I just know!)

So, what is a fraction? Essentially, it is a division:

This is the main motivation for converting in this direction; we are usually taking a form that was useful for calculating, and writing it so it makes sense to our “customer”. 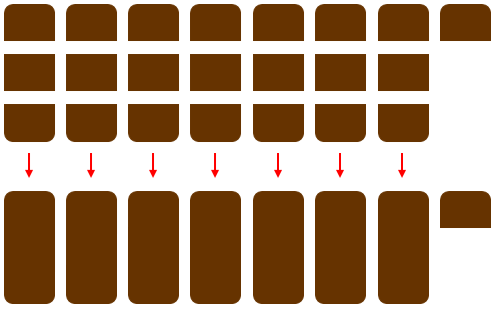 So we could just keep pulling out groups of 3 until we have 7 piles of 3 (each pile meaning one candy).

Here we recognized that the largest multiple of 3 less than 22 is 21, and that that is 7 times 3.

So we did a division with a remainder; the quotient is the whole part of the mixed number (the number of wholes, each of which is 3 third), and the remainder, 1, is the number of additional thirds.

We’ll have several more ways to think about this, but this basic idea is at the root of them.

Here, rather than start with a pile of pieces, I imagined trying to make 17 elevenths, 11 at a time. The division by 11 tells me I need 1 whole sheet, and the remainder tells me I will need 6 of the 11 pieces from an extra sheet. 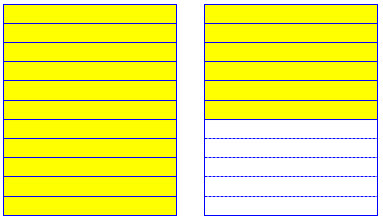 Now we can do one without the image, just thinking of it as an abstract division:

We had a similar question two months later:

I replied with actual “pictures”, this time starting with the pieces, but focusing on the division:

The long division will become a visual tool in itself, as each part becomes part of the mixed number we are forming. And you don’t really have to do the whole long division by hand; you could use a calculator to divide 53 by 6, and just write down the whole part of the answer (8.83…) on top, then multiply that by the 6 to find how much 8 6’s is, and subtract to find how many left-over 6’s there will be.

This makes the quotient and the remainder visible; the latter is a number of sixths.

Now we can make a memorable visual image of the long division and the final answer:

From mixed to improper

How about reversing the process? Here is a question from one week earlier than the last one:

This time, the question asks for both directions. I answered, starting again with an image, this time of conversion from a mixed number:

You can think of this as making a common denominator, something we’ll be doing in a later post. Once the whole number is turned into a fraction, we can combine into one improper fraction.

Our eyes move clockwise around the mixed number, first multiplying and then adding, to make the numerator.

My advice for going the other direction was much like what we’ve seen:

Jo is again asking for both directions. Doctor Ian started with pictures you can interpret as pies (or maybe cakes):

So a “unitary fraction”, representing 1, is a whole “pie”; and if you draw the picture, converting a mixed number to an improper fraction is just a matter of counting pieces.

That’s the routine method I’ve shown: multiply whole by denominator, add the numerator, and put that over the same denominator.

This is our common theme: Don’t depend on memory alone.

He, too, followed up with the other direction:

Here we were given a collection of 25 things that want to become sixths; so we gather them together by sixes, which turns out to mean division:

This is sometimes the best way to really learn something: Do it the hard way until your mind insists on taking the shortcut, because it feels natural.

We’ll close with a special case that comes up mostly when you are learning algebra:

Brenda was trying to mechanically apply the rule we have been discussing, without thinking carefully about meaning:

What we have here is a case where the order of operations collides with a special notation. (This is part of the reason we avoid using mixed numbers in algebraic equations!) The space between whole and fraction here is taken to imply addition, rather than multiplication as it is in algebra; but this addition takes precedence the way multiplication usually does: The mixed number \(4\frac{1}{7}\) has to be thought of as a unit, to teh whole of which the negation applies: \(-4\frac{1}{7}\) means \(-\left(4\frac{1}{7}\right)\). Given that fact, there is nothing new here.

The negative sign on a number applies to the entire number, not just to the first digit.

Here is a 2004 question about a similar issue:

I replied, focusing on the notation: