In working through topics pertaining to fractions, I find that questions about improper fractions are common. Today we’ll look at questions about the definition of the term, and next time we’ll move on to mixed numbers and how to convert between the two forms.

How can you have more than 9 ninths?

First, here is a question from 2002, about how improper fractions should be read (and how they can exist at all):

Dana seems specifically concerned about the use of words, feeling that an improper fraction shouldn’t be read as a fraction; but probably also is unsure about the concept itself. I replied:

This is yet another example of a mathematical word starting with an everyday concept (a piece of something), and extending it so that some of the original implications (smallness) are no longer present. Mathematicians love to generalize. 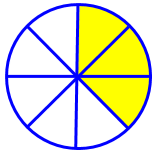 are fractions, in the broad sense.

As we’ll see below, this sense of “wrongness” is the core of the idea of “improper”.

This 2003 question deals with a commonly misstated aspect of the definition:

Richard had found definitions that say an improper fraction is one whose numerator is larger than its denominator. Does this make 4/4 proper, because 4 is not greater than 4?

I find that today, the Mathworld page is the same except that they have changed the first sentence to “A fraction p/q ≥ 1.” That makes everything consistent, while still using the word “generally” to suggest that not all authors say this. The dictionary still gets it right. (They don’t always do so for math terms.)

Is 5 a mixed number?

To elaborate on what I mentioned there, here is a similar question from 2004 about mixed numbers:

There are many ways to write 5, some of which can be called mixed numerals, though “5” is not:

An additional comment I might make, from my more recent experience teaching, is that sometimes a problem will ask for a mixed number as an answer, but you might find the answer is 5. In that case, the instructions tell you what to do in the “worst case”: If you can’t write it as a whole number or proper fraction, use a mixed number rather than an improper fraction. In that sense, 5 would fall under the umbrella of “mixed number”.

In 2004, we got a question at another edge of the definition:

That’s a new one! I answered:

Quite a few terms are defined for kids (or for mathematicians living before modern times!) and therefore apply only to simple cases with positive numbers. Another example is direct proportion, which is commonly described by saying that both quantities involved increase together – but that isn’t true if one can be negative. Formal mathematical definitions are stated carefully to cover all cases, but common definitions are not so careful.

This would allow us to say a proper fraction is positive, ignoring the sign issue; but then we would seem to be saying that any fraction must be positive, which is definitely not true.

But “I just know” always feels dangerous to me:

They could be taking “negative improper fraction” either way.

That’s another language workaround; “larger” does sometimes have this meaning, as opposed to “greater than”, which is more formally mathematical.

Laurel replied, explaining the reason for the question:

Students thinking outside the box (because they aren’t quite sure where the box is!) can be the source of some of our best questions.

Why is it called improper?

Those questions lead up to a deeper question: What is the basic meaning of “improper” that determines how we think about any definition issues? Here is a question from 2006 that takes us to that level:

These examples of other uses of “proper” within mathematics suggest that it means “other than the whole”.

I jumped in with an addendum, looking outside of math for more examples and history. I noted that the question, literally, was “where did the terms originate”:

This gives a definition (which applies to positive fractions), and a reason: A proper fraction is less than 1. This ties in with what we saw before, “proper” meaning “less than the whole”.

Then, where did the word itself come from?

In Latin, “proprius” means the adjective “own”; from it we also get “property” (one’s own possessions, or a characteristic), “propriety” (properness), and “appropriate” (suitable).

So “proper” means “in the narrowest sense”.

Then I looked farther into the MathWorld site, as Doctor Ian suggested, for more definitions.

That gives you a sense of other uses of the word in math, which are all similar to those Doctor Ian and I raised. “Trivial” means “related to or being the mathematically most simple case”.

How about improper fractions in algebra?

The last question we’ll look at takes us beyond arithmetic, but is useful in thinking about how a concept changes as it is applied to new things. This is from 2017:

In moving from arithmetic to algebra, and specifically polynomials, values are not as significant as degrees (in terms of their overall behavior), so we transfer the role of size of a numerator to its degree. Interestingly, this means we have abandoned any explicit idea of being “less than the whole”, but simply taken an analogy to fractional numbers.

For those of you paying attention to the algebra, I added a correction to the question:

5 thoughts on “Improper Fractions: What Are They, and Why?”