The next topic in our survey of fractions is the fact that two different fractions can represent the same number – that is, they can be equivalent, though they are written differently. At first, this may seem strange to students: the number 5 only has one “name”, so why should 1/2 and 2/4 be different “names” for the same number? But in fact, this is part of what makes fractions so useful. Before we look at how to “reduce” or “simplify” a fraction, we’ll consider some questions about the mere fact that two different fractions can be equal.

The whole block represents the “unit” (the number 1, one block), and the “shaded” part is half of it, the number \(\frac{1}{2}\), just as two shaded blocks would represent the number 2.

By cutting the whole in half crosswise, I’ve cut each of the original pieces in the same way, so we have doubled the number of equal parts, as well as the number of pieces shaded.

Renaming in both directions can be useful: We usually want a final answer to be in lowest terms (reduced) to make it easy to talk about; but while we are doing something with the fractions (such as adding them) we sometimes have a reason to use larger terms.

Here is a 1999 question starting with a specific example that goes in that reverse direction:

That’s Sam’s first fraction; how about the other?

These were both drawn with the same size “whole” in order to compare them.

(So don’t imagine you’re eating less when you eat fewer pieces! Maybe they are also bigger.)

That’s the concept; but there’s more to be said:

This is what we did above, making equivalent fractions by multiplying both terms in the fraction. And, again, we can start with the bigger terms, too:

As I said to Alyssa, you can multiply by anything, but you can only divide by common factors. That’s why we have to stop eventually, in this case with \(\frac{1}{2}\).

We’ll soon be examining how to compare fractions; this example shows that you may not find all fractions equivalent to one of them, such as \(\frac{4}{8}\), by starting from the other, such as \(\frac{6}{12}\), and just multiplying its terms. But there is a way:

Presenting the concept to a class

I’ve included the best such pages here; but the topic can also be found in answers about operations on fractions, such as addition.

I proceeded to adapt the visual approach we’ve already seen to her specific situation, trying to make it fun and memorable:

I’m rather proud of this idea! By pretending that something has changed, we are calling the students’ attention to the fact that drawing one more line didn’t change the value, only its appearance.

When you’re done, either you or others will have made a set of fraction cards like this:

If the students have learned something about multiplication of fractions already, then this could be done as I stated it; if not, you’d want to write this as

showing how both numbers are multiplied by 2 (or whatever). 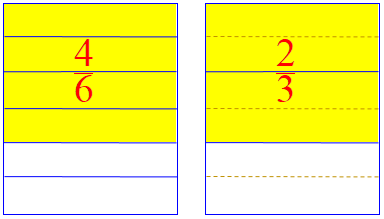 But that doesn’t make it fully clear that we are dividing each number by 2. What I had in mind was to make it look as much as possible like the earlier examples, where we just have one line to remove; the result would look like this after rearranging: