We occasionally got questions about Probability Distribution Functions (PDFs) from students who lacked a full picture of what they are; when I searched for references to give them, I never found one that explained the whole concept as I wanted to. When the following question came in, I took it as an opportunity to create that reference. This week, a student asked some questions far above her current knowledge, that touched upon this topic; I referred her to this page, and took note that it might be one to add to the blog as well.

The normal curve, and other PDFs

Mike, in 2014, was looking at the subject from a fairly advanced perspective, knowing enough calculus to talk about it in detail; others, without calculus, write to us having been introduced to the normal distribution curve and the basic idea that “the area under the curve is the probability”, but not knowing anything more. I tried to aim my answer at a level that could help anyone.

Mike is primarily referring to the normal distribution, which many people see even without ever being taught what a PDF is in general. Here is a good introduction:

He had gone beyond that, seeing deep explanations of the meaning of the normal distribution, such as this one:

Start with a histogram

But it seemed that the underlying ideas were obscured by the detail; he wanted to see the basic concepts, such as what the vertical axis of a PDF even means, and how area comes to be involved. I chose to start with the basics of what a PDF is, to put it all in context. I started with a basic histogram, which is easy to understand.

Here is a nicer version of the histogram: 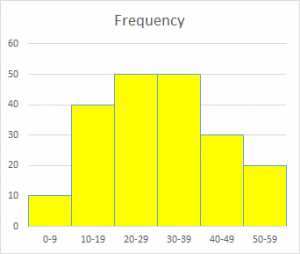 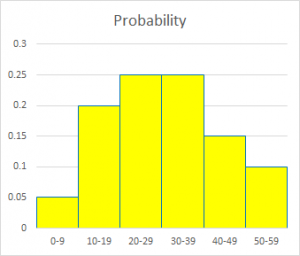 At this point, we have a discrete probability distribution. But we need to give it a little twist before we can move to the continuous case:

Here is the final result of that development: 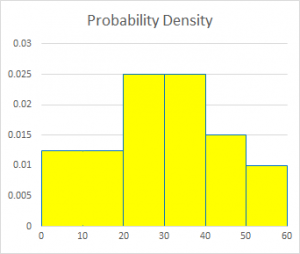 In my comment above, “for simplicity”, I was ignoring an important step that is commonly taken in moving from ranges to boundaries on the horizontal axis, which prepares for the move to continuous distributions. This is the distinction between “class limits” and “class boundaries”, and the related “continuity correction”. We never archived a full explanation of this, but you can find some of the relevant ideas here:

From discrete to continuous distributions

Now we are ready for the step to continuous probability, though a full understanding of this level requires some knowledge of calculus:

This curve represents a continuous distribution that might have produced the histograms we have been using; I tried to draw it so that the area under the curve between two values on the horizontal axis is the same as the area of the corresponding bars in the histogram (shown in the background): 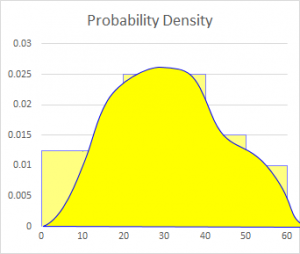 At the end, I referred to some other sources, which go into more depth than I have, perhaps at the expense of clarity:

Apparently I guessed right about what was needed:

Thanks are always appreciated!

1 thought on “From Histograms to Probability Distribution Functions”