A recent question involved a word problem about fractions, which will fit in nicely with the current series on fractions. We’ll explore several ways to solve a rather tricky fraction word problem, some avoiding fractions as much as possible, some focusing on the meaning of the fractions, and others touching on algebra.

What fraction of misdemeanors are solved?

The question came from Stacy in early March, just stating a problem without explanation:

3/5 of cases are misdemeanors.

The rest are felonies.

2/3 of felonies are solved.

2/3 of all cases are unsolved.

What fraction of misdemeanors are solved?

The problem involves both fractions and logic. Not knowing the context, we can’t be sure which topic it is primarily meant to give practice in, or where Stacy is stuck. For this reason, we often ask for more information before trying to help. But sometimes, as here, it seems appropriate to start with general advice before asking for work. Doctor Fenton answered with some good suggestions for avoiding the fractions:

One way to solve this problem is to consider a case with actual numbers.  The problem involves thirds and fifths, so choose a total number of cases which is divisible by both 3 and 5.   The smallest such number is 15.  Now determine the number of misdemeanors, the number of felonies, and the number of each type which are solved.

If you use a different number, such as 30 or 150, you should still get the same fraction for your answer as you did for 15.

If you have any questions or need more help, please write back and show me what you have been able to do, and I will try to offer further suggestions.

This advice is more or less equivalent to using common denominators, or to changing units to work with whole numbers. And it’s similar to what we do in algebra, “clearing fractions” from an equation to make the work easier. A key idea behind the method is that since everything in the problem is a ratio, nothing depends on the actual numbers, and we might as well assume some numbers that will work well. In fact, the actual numbers (assuming all the fractions are exact) must be multiples of the numbers he proposes. At a higher level, one might use a variable for the total number of cases, which would be eliminated in the course of the work, proving that it has no effect. We’ll look at some of these ideas later.

An attempt with fractions

Stacy replied, not exactly showing work yet, but giving a little more information:

It often helps when a students shows the expected answer; that allows us to see whether perhaps she is actually correct but thinks she is wrong because she was given a wrong answer (which is not true here), and also tells us that we are not accidentally helping with a test question! Seeing her own answer without work, however, doesn’t help us see where the difficulty lies. So Doctor Fenton asked for more:

Can you show me your computations that give you 1/5?

Stacy answered, showing that her work didn’t actually use the suggested method, but worked directly with the fractions:

3/5 misdemeanor cases so 2/5 would be felonies

She starts off well, but then gets confused; that is not surprising if her original work was written only as a collection of calculations without explanation. (Trying to untangle it, I think there is some bad punctuation and some run-on equations, so it doesn’t mean quite what she wrote.) We’ll get back to this method later.

Back to whole numbers

Doctor Fenton replied, turning back to his suggestions:

This series of questions follows what Stacy started to do, but without the fractions, making it perhaps easier to see what to do. I find that fractions can interfere with students’ view of the reasoning required for a problem, as if fractions and logic each take too much brainpower for a student still learning both.

Making a table to organize the numbers

Doctor Rick now joined in, with a suggestion for taming the logic itself:

Hi, Stacy. I would like to jump in here with a further suggestion. It can be hard to keep track of all the information and how one thing is related to another. A little chart can help you organize the data, something like this:

I have put in the numbers from Doctor Fenton just mentioned, following his approach of supposing there are 15 cases total (which I see you didn’t use yourself). Can you see how the chart works? For instance, the number under FEL, in the SOLVED row, is the number of felonies that have been solved. You are told that this is 2/3 of the total number of felonies, so the number you put in that space should be 2/3 of the number in the TOTAL row under FEL.

I hope this will help!

This kind of table is useful in many kinds of problem, particularly in probability; we have used it in the posts Conditional Probability and Multiple Choice, and Bayes and Virus Testing.

Ok so I have 15 total cases

Here is her table, if she is using it, as I interpret what she is saying:

The numbers don’t add up, probably because she is not carefully distinguishing the “whole” each fraction relates to. But also, when she reverted to fractions, she made a silly mistake in her multiplication. But she is close.

You are almost there.

Of the 6 felonies, 4 are solved.  10 cases total are unsolved, so how many of the misdemeanors are solved?

Filling in the chart Dr. Rick provided should also be easy.

One we find the total solved (?), we will be able to find the solved misdemeanors (??).

Ok I get it looking at the chart but he used a block system and I couldn’t even do the math correctly with the fractions multi-step based on what I was getting.

I do now understand why the answer is 1/9 though thank you.

We’ll think about that mention of “a block system” soon.

Here is the completed table:

Let’s check it against the problem. First, we see that each row or column adds up. As for the facts:

Doing it with fractions

We could also have filled in the table with fractions (all being fractions of the total) rather then absolute numbers:

We might have filled in the numbers like this, starting with only the three bold numbers, which are directly given:

Here is my process:

We didn’t need to work out the unsolved fractions for this problem.

Doing it without the table

But what might the teacher have intended? I don’t know for sure what the “block system” is, but it is probably some form of “block diagrams”, also called tape diagrams, or strip, or bar models, in which fractions are depicted as parts of a strip representing the whole. Here is one way we might solve the problem that way: 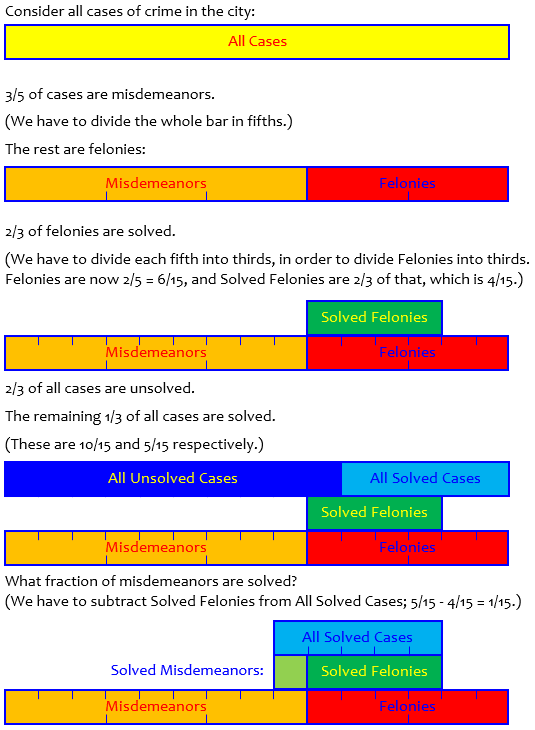 Commonly I would do this without trying to measure things exactly, just sketching the relationships to think about what has to be done with the fractions.

Doing it with algebra

How about solving the problem with algebra? This amounts to putting an x next to every fraction in the fraction method:

Without an orderly way to see what data we have and what we need, and therefore plot a course from one to the other, we need to carefully write the meaning of each expression, and scan for useful values at each step. So apart from just getting the fraction calculations right, the main difficulty in the problem is choosing what to do at each step.