Last time we looked at what a degenerate conic section is, and how it relates on one hand to actual cones, and on the other to the general equation of the conic. Here we’ll look at the parameters of conic sections (focus, directrix, axes, and especially eccentricity) and how they apply to degenerate cases.

Does a degenerate conic have an eccentricity?

We saw last time that a pair of intersecting lines is one form of degenerate conic (specifically, a degenerate hyperbola). We’ll see what eccentricity means in a moment.

Is it infinite for a pair of lines?

Wikipedia explicitly says that the eccentricity of a pair of lines is infinite. Here is a quote (as it is now, 14 years later):

In mathematics, the eccentricity of a conic section is a non-negative real number that uniquely characterizes its shape.

More formally two conic sections are similar if and only if they have the same eccentricity.

One can think of the eccentricity as a measure of how much a conic section deviates from being circular. In particular:

Can that be wrong? Or is Nony’s professor right?

Is there a formula that can be generalized?

Note that the a and c in the definition of eccentricity are not the A and C in this equation. Doctor Vogler used lower case letters in the equation; I’ve changed them to upper case for clarity. Also, in the following, I have corrected the conditions for the formulas for eccentricity, which were a little off.

Note that A, B, and C in this simplified equation are different from the general equation.

The result is two different formulas, which swap the roles of A and B, because the roles of the axes depend on magnitude (for ellipses) or sign (for hyperbolas) of the coefficients.

Let’s look at a couple examples. 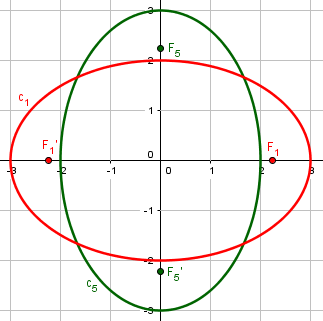 And it’s obvious that these have the same shape, so if eccentricity is to be meaningful, they must be the same. 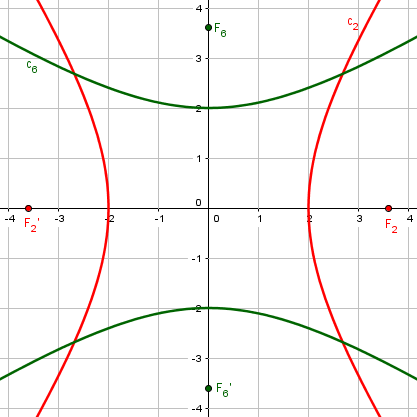 Again, the eccentricities are obviously the same, but come from different formulas.

Now, I should add that it is possible to write a “single formula” for eccentricity, but it takes a bit of stretching to call it that. Here is what Wikipedia suggests for a formula:

is negative or \(\eta =-1\) if that determinant is positive.

They’ve really combined two formulas into one by using the determinant as a “switch”; and if it is zero, the eccentricity is undefined. Guess when that happens?

Applying it to a pair of lines

Now, what happens for degenerate hyperbolas? 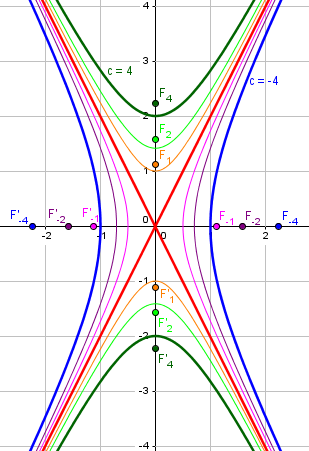 If we graph the eccentricity as a function of the constant c, it looks like this: 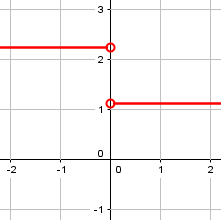 What should we say the eccentricity is when \(c=0\)?

Here is this family of (“rectangular”) hyperbolas, all with eccentricity \(\sqrt{2}\): 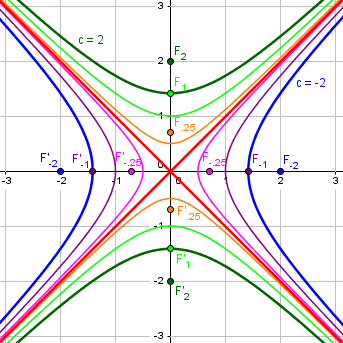 Here is a graph of the eccentricity vs. c this time: 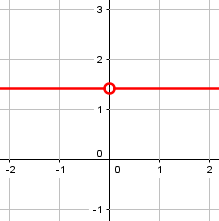 In this special case, an argument could be made that the eccentricity is always \(\sqrt{2}\); but is that appropriate?

Here is the family of parabolas, with m varying between -1 and 1, with zero producing the line; all have eccentricity 1: 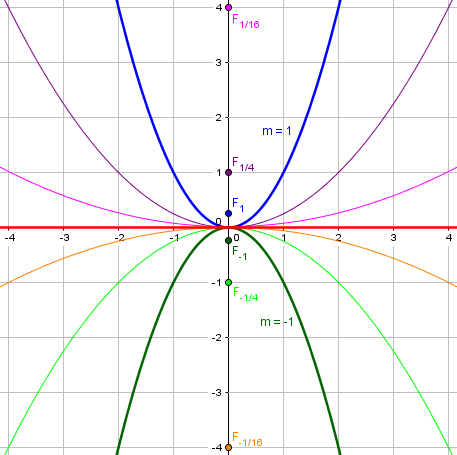 Here is the graph of eccentricity as a function of m: 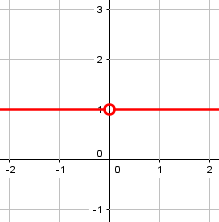 Again, should we say the eccentricity of any line is 1? We’ll soon see a reason not to!

As for the family of circles approaching a single point, we’ll see that below, too.

A circle as a degenerate ellipse

Here is a simple little question from 1998:

The graph is actually not hard, but the rest are interesting!

Here is a graph of this ellipse that is a circle: 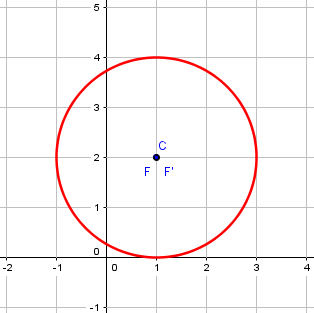 At first, you might not think of this as degenerate; it definitely is not a degenerate conic. But it has lost some of the properties of a general ellipse, hasn’t it? Rather than two foci, it has only one; rather than two axes, major and minor, it has infinitely many diameters, any of which might be called an axis, but none of which is “major”.

A degenerate circle can be a point or a line

An exercise (at a somewhat higher level than we are at here) evidently mentions a “non-degenerate” circle, assuming students will know what that means. In order to answer, it’s necessary to explain what a degenerate circle is!

(We’ll look at triangles next week!)

Here we can see a circle, on one hand, shrinking to a point, and on the other, expanding to a line: 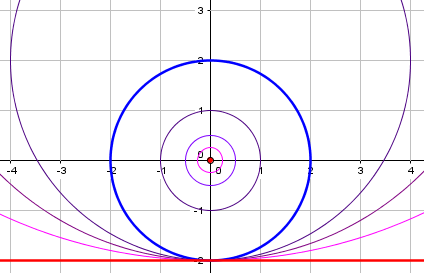 Incidentally, observe that these circles all have eccentricity 0; but can we say the line also has eccentricity 0, when we saw (above) reason to call it 1, when we made it as part of a family of parabolas? This is yet more evidence that degenerate conics don’t deserve to be assigned an eccentricity! It would be appropriate to call it indeterminate.

Is a point a circle?

There are two issues here: how a point can be considered to actually be a circle, and how a set of points can consist of only one point.

This is why we generally don’t include degenerate cases within a category, but treat them separately, just as the boundary of a circle is distinct from its interior. A proper circle has one tangent at any point on it; a single point doesn’t have tangents at all, unless you stretch that definition, too!

It is quite common in mathematics to take a plural to include the possibility of only one. For example, a “polynomial”, whose name comes from Greek for “many names”, is defined as a “sum of terms consisting of a number times a positive integer power of the variables”; but that “sum” may consist of only one term, with no actual addition needed!

This is akin to the discussion of inclusive definitions in Is a Square a Rectangle? Classifying Shapes, and the follow-up post, What Is a Trapezoid? More on Inclusive Definitions.

I’m not sure which argument he lost, since I said the book was not really correct on one count, but he was wrong about the word “set”. The important thing, as he says, is to learn!