While I’m showing some recent explanations of basic trigonometry techniques, this is a good time to look at an even more basic explanation of the essentials of the subject for a beginner.

This calls for a non-scary introduction to the subject that will show some of the power of trig, without showing difficult parts. Doctor Ian took up the challenge:

The best things to tell someone who is just being introduced to a subject may be the same things you would tell someone who has struggled with it. An overview of what it’s all about, giving the big picture without getting tangled up in details, can help anyone.

But this is just a common convention, not a mathematical necessity.

The Pythagorean Theorem and the sum of angles allow you to find a missing side from two given sides, or a missing angle from two given angles (one being 90°). Where trigonometry proper is needed is to handle relationships between sides and angles, mixing the two together.

There are some special triangles for which mere geometry is enough. One of these is half of an equilateral triangle: 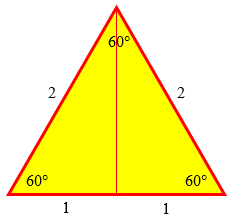 Most angles don’t have nice ratios like these; they have to be calculated as decimal approximations (using methods most of don’t need to know) and put into tables (or, these days, into calculators) for you to use. But the idea is the same.

And since we see that the value of any of these ratios is the same for any triangle with a given angle, each ratio is a function of the angle.

All that’s lacking is names for these functions:

A sample of the table (whose link I have updated from the original): 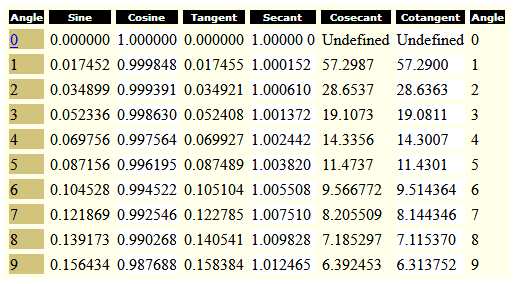 Before calculators (and even now, in places where calculators are not commonly available), much more detailed tables were needed. Here is an example of such a table for the sine.

By the way, the names, “sine”, “cosine”, and “tangent”, along with “secant”, “cosecant”, and “cotangent”, can be considered as arbitrary names that just have to be memorized. Here are one page from Ask Dr. Math about the names, and another about memorizing their meanings:

I’ve seen many other mnemonics for them.

The first three functions listed (sine, cosine, and tangent) cover all three pairs of sides; the last three are their reciprocals, so that we have a name for every possible ratio of two sides (in either order). That’s overkill, but can be useful sometimes to make a formula simpler.

Now Doctor Ian moves on to how these functions can be used to solve a triangle (that is, find all the missing parts when you know two):

It’s good to have a few examples, not just a dry, general rule:

Note, by the way, that the picture shows only relationships, and is not at all to scale; we don’t need that. But if we drew it accurately, we would see that because 17° is a small angle, the vertical side is much less than 25, just as we found; whereas the hypotenuse is always longer than either side, in this case just a little longer:

This is just a taste of the more complex things included in trig. When needed, you can look up these things, like the values of the trig ratios, in a table, though many are very much worth knowing, at least as long as you are going to be working actively with them.

How about a taste of what trig can be used for? Jimmy asked for some easy sample problems. Many important applications can’t be understood until later math courses, but there are many that are easy to appreciate. 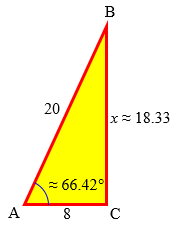 Here we used the inverse cosine function, which just means reading the table backward, finding the angle that has a desired tangent. 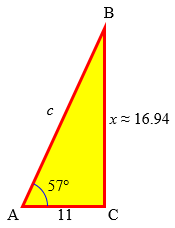 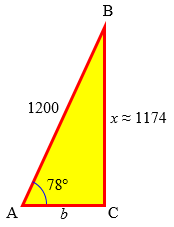 Some people need extra help seeing how to decide which function to use to solve a triangle; here is general explanation of that process:

No, this doesn’t take the place of textbooks! But it does make the subject more approachable.

The day before, another student had asked a similar question, which was combined into this page:

This time, Michael is familiar with the right triangle trigonometry that was covered above, but wonders about the bigger picture.

Doctor Ian answered this as well, connecting the trigonometric functions first with circles, and then with their graphs:

To see clearly why the sine and cosine show up here, we can add a line to make a right triangle: 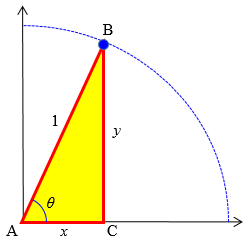 Here we’ve started extending the concept of sine and cosine, by allowing our point to go all around the circle rather than staying in the first quadrant where x and y are positive. This is the beginning of an amazing journey through trigonometry, where many new applications open up beyond solving right triangles.

For a deeper answer to Michael’s question, “What are they,” see my post What Are Trig Functions, Really?