This week and next I will look at a recent discussion on trigonometry that dug deep into two different issues: solving equations, and proving identities. These are good summaries of how to approach these common kinds of problems. This week: solving basic trig equations.

Here is the initial question, from our friend Sarah in June:

I’m learning how to solve trigonometric equations, using the CAST rule, but l’m finding it hard.

First of all, is cos(θ) and cos(-θ) the same for all angles? If yes, why? I asked my teacher and he said not necessarily. He also said sin(-θ) is not always -sin(θ) .

Now, when it comes to solving equations, for example, if sin x = -1/2, I would find the sine inverse of 1/2 and draw that in the cosine and tangent quadrant since sin x has to be negative.

However, when they get more complicated, l get stuck. Could you show me an example worked out please, and then give me one to try myself?

There are several questions here, but they focus on two things: how signs of trig functions are to be handled, and then how to solve simple equations.

Doctor Fenton took the question, giving a thorough survey of these topics. He began with the teacher’s statements, which are wrong if they are quoted correctly:

To see why, look at how the sine and cosine are defined in terms of the unit circle: see

An even function is one that behaves like an even power (e.g. \(f(x) = x^2\)), in the sense that changing the sign of the input doesn’t change the sign of the output; the graph is symmetrical about the y-axis. In general, for an even function, \(f(-x) = f(x)\). This is true of the cosine and its reciprocal, the secant.

In the same way, an odd function is one that behaves like an odd power (e.g. \(f(x) = x^3\)), in the sense that changing the sign of the input does change the sign of the output; the graph is symmetrical about the origin. In general, for an odd function, \(f(-x) = -f(x)\). This is true of the sine, tangent, cosecant, and cotangent.

In both cases, this is always true – for all x. My best guess is that the teacher might have said that neither of these is true for all functions.

Here is a picture of the unit circle Doctor Fenton refers to: 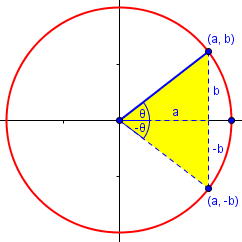 Clearly, the sines of θ and -θ are opposite, while the cosines are the same.

Now, what does CAST refer to? Students in different places are taught different mnemonics or other terminology, but Sarah’s use of it made it (eventually) clear:

At first, I didn’t understand what you meant by the CAST system, but I think it must refer to the method of determining the sign of the trigonometric functions in each quadrant, starting in the fourth quadrant (lower right) and proceeding counterclockwise: Cosine, All, Sine, Tangent.  I haven’t seen that method used before, since all the books I am familiar with use the acronym ASTC (with the mnemonic All Students Take Calculus).  If that is correct, your acronym is simpler, but you have to remember to start in the fourth quadrant rather than the first.

You don’t indicate whether you use radians or degrees, but since you seem to be just learning the subject, I will use degrees.  However, if you continue to study mathematics, you will need to learn radians.

Here is a picture of the “CAST System” (or Rule, or Method), which is indeed identical to ASTC: 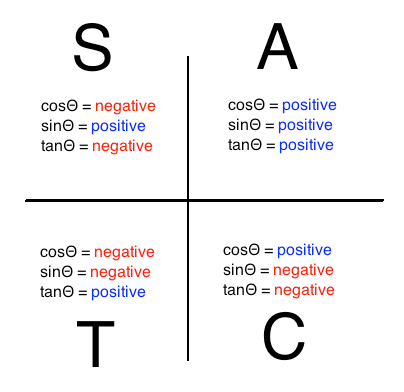 When you are solving an equation of the form sin x = y, first you should know that the equation has solutions only if -1 ≤ y ≤ 1.  So if y < -1 or y > 1, there are no solutions, and nothing to be done.  Students are generally expected to know the values of the trigonometric functions for the “special angles” 0°, 30°, 45°, 60°, and 90°.  An easy way to remember these values is to make a table which I call the “half-square root” table.  For sine and cosine, write the following table:

Next, fill in the following values:

When you simplify the expressions, it becomes:

All solutions in an interval

In our example, the sine is negative. Here are the two solutions for negative sine or cosine:

Here, as Doctor Fenton said, our first thought for the sine case would be –θ, where θ would have a positive sine; we need several tools to be developed below. The first is this:

This is where my 360° – θ for the cosine case above came from. Rather than use the negative angle –θ, we add 360° to it to make it positive: 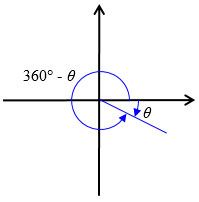 The reference angle is always a first quadrant angle.

If θ is an angle, θ’ is its reference angle, and T is any trigonometric function, then T(θ)=±T(θ’), and you choose the sign using the CAST rule.

The reference angles for θ in each of the quadrants are as shown here:

General solution (all of them)

That was the way to find the two solutions of this equation in the interval 0° ≤ x < 360°. The problem could be asking for more:

If the problem wants you to find all the solutions, you can find them from these two solutions by adding or subtracting 360° to each of the two angles:

Does this help?  If you have any questions, please write back and I will try to explain further.

That was Doctor Fenton’s answer to the initial question. Sarah had some follow-up questions:

Thanks so much for your detailed reply, it’s very helpful.

Also, we do use radians, and we do have some trig identities too.

To work with radians, you’d essentially just replace 360° everywhere with 2π.

We’ll look at subsequent questions on identities next week.

First question: Could you elaborate a bit more on the periodicity part please? And what would it be for tangent?

An angle is formed by two rays emanating from a common point (the vertex of the angle).  In “standard position”, one ray (the initial ray or initial side) is from the origin, along the positive x-axis, and the other ray can be thought of as obtained by rotating a second ray from the origin, starting along the positive x-axis, through a given angle θ, to become the terminal ray or side of the angle.  As this moving ray rotates, it crosses the unit circle at a point with coordinates (x,y).  cos θ is defined to be the  x-coordinate of the intersection point, and sin θ is defined to be the y-coordinate.

As the terminal keeps rotating, it eventually makes a complete revolution and then points along the positive x-axis again, and this happens when θ reaches 360°.  As the terminal ray continues to rotate, the intersection point after it has rotated by an angle θ beyond one complete revolution will be the same point where it intersected the circle after rotating by angle θ.  That is the cause of the periodicity, and why that period is 360°.  Rotating the terminal ray by 390° leaves the terminal ray in the same position as rotating by 30°.  Rotating one more full revolution adds another 360° to the angle, making 750°, and so on.  The sine and cosine of an angle repeat after every additional 360° rotation, in either direction, clockwise or counterclockwise. 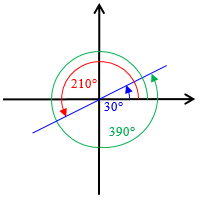 Second question: I didn’t get the k part; what do you mean any integer k?

How to state the solution

Third question:We would usually present -30° and 330° as two separate answers; should they be presented as one?

If a problem asks for ALL solutions of a trigonometric equation, you find the solutions in the fundamental period, and then write the formulas for all the angles coterminal to these angles.

Next week we’ll look at Sarah’s question about identities.

1 thought on “Trigonometric Equations: An Overview”