Definitions are interesting in several ways. Sometimes they are essentially arbitrary; other times there is a very good reason for them, and understanding that reason can be helpful in understanding and using them. But they are usually taught just as something to memorize. Let’s think about why slope is defined as it is, and not some other way. I’ll look at three answers we’ve given, all saying similar things, but from somewhat different perspectives.

Kristin’s thoughts focus on how you draw a line with a given slope: you can either go up 9 and then right 1, or right 1 and then up 9. But these are both a slope of 9/1 = 9; they are just two ways to get to the same point. Kristin didn’t relate these to the equation, to see whether both equations give the same point.

But I saw two separate points to discuss: 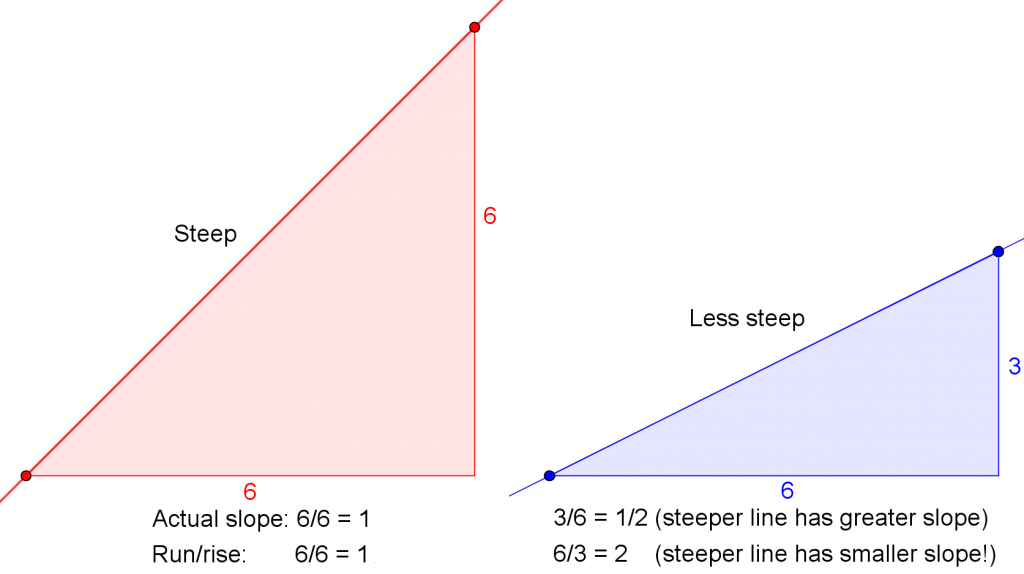 So the ratio as we define it fits the word “slope”, by being greater when the line slopes more. Now the second issue: 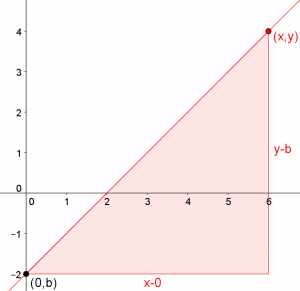 Capturing the idea of steepness

His focus was on gaining an understanding by going through the process of inventing the concept oneself:

Another point might be worth making here: Wouldn’t we get an equally good measure of steepness (maybe even more natural) by making it rise/drive — that is the rise divided by the distance we actually travel along the line? On the surface, that makes sense; the only problem is that the equations you’d get would be horrendous. The slope formula would become \(\displaystyle s = \frac{y_2 – y_1}{\sqrt{(x_2 – x_1)^2 + (y_2 – y_1)^2}}\), and the equation of the line would be \(\displaystyle y = \frac{sx}{\sqrt{1 – s^2}} + b\), which amounts to converting our new slope s to the familiar m before using it.

My conclusion: It is really the convenience of the equation, more than anything, that drives the choice of definition.

A name for what the coefficient does

By 2012 I had changed my own perspective to what I just stated, so I was glad of an opportunity to answer the question again.

Here is the question that came in then, from teacher Sherrie, who gave just the right setup for what I wanted to say:

I started with the usual reasoning based on the meaning of the word “slope”:

From this perspective, it is quite possible that the simple form of the equation came first, with no particular names attached to the coefficients; and the names were given based on their meaning. So maybe someone didn’t come along and ask, “How shall we define something called ‘slope’?”, but rather, they recognized that this concept fit well with a basic linear equation, so it deserved a name – and “slope” fit perfectly!

Incidentally, this can also explain why the names we give the parameters (m and b in the U.S., various other combinations elsewhere) don’t stand for anything (like “s” for “slope”, as many students ask us). They are just parameters in the equation, which happen to have meanings, rather than starting out as something with a meaning (like “r” for radius in the equation of a circle). For more on this, see

You may also find this relevant:

I had a little more to add:

And that is often the ultimate reason for a definition: it becomes popular because it makes subsequent math work well. All the ideas I listed are just different names for the same concept, and all must be defined as “output change over input change” in order both to mean what we want, and to behave conveniently (for example, you can add speeds together).

This reminds me of a case where both orders are used. In the U.S., we measure the efficiency of a car in miles per gallon (mpg): how many miles you get per gallon used. In some metric countries, kilometers per liter (km/L) is used similarly. Here a larger number is better; this ratio represents efficiency, and we are thinking of fuel as input and miles driven as output. (That makes sense: It’s what a car does!)

But in other places, the usual measurement is liters per 100 kilometers (L/100 km). This number represents the rate of usage: how much fuel you use to go a certain distance. Here a smaller number is better. They are thinking of distance driven as input and fuel usage as the result. (That makes sense, too: It’s what you do when you drive a car.)

Both approaches, though opposite, make sense; the first is most natural as part of figuring out how far you can go with the fuel you have, while the second is most natural for deciding how much fuel it will take to go a certain distance.

But always, a rate is the same as a slope: the rate of change of an output per unit change of input. What varies is what we are thinking of as the output.

4 thoughts on “Why Isn’t Slope Run Over Rise?”