Last time we looked at how to use a ruler to measure distances. This time, we’ll consider another common question over the years: how to use a protractor to measure angles. We’ll also consider the relationship between protractors and the compass and straightedge constructions that started this series on geometry tools. And just like last time, I’ll add a bonus: why it has that name.

Drawing or measuring an angle

Although there were several short answers in the Ask Dr. Math archive already, our first extended discussion of reading a basic protractor was this, in 1998:

Michelle had a specific task to perform, but her main need was to learn how to use the protractor; so I used the former as an example for the latter:

I was very new to Ask Dr. Math, and inserting pictures was not easy, so I did it the hard way. Here is a better picture (of a really cheap school protractor!): 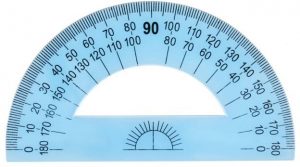 Note that the vertex of the triangle does not go on the edge of the protractor (though that might be true for some that are not transparent like mine); the protractor has to be placed over the line you are using, with the vertex directly under the cross, and the line passing under the 0 mark. 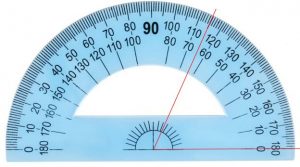 On my protractor, we used the inside numbers. There are 10 marks between 60 and 70, and we chose the large one in the middle, for 5.

Though the question was only about drawing an angle, I added a comment on the opposite task:

Measuring angles in a triangle

Three years later, someone named Chad asked another question that was added on to this page:

Again, the goal is a specific task, but this time it’s not finding and drawing an angle, but measuring one that is already there, as in my extra comment above. There’s a little more to be said about that.

After referring to the answer above (the reason this one was added to the same page), I said,

This is not always needed, but it’s a good thing to check before you get started.

My little triangle has a 65° angle: 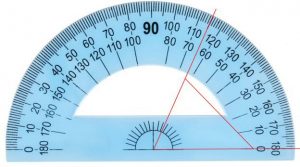 This example has marks every 2 degrees; 1-degree markings like mine are probably most common, but I wanted to show the harder case.

The 2° markings are common on better magnetic compasses (which, by the way, are more like protractors than like drawing compasses): 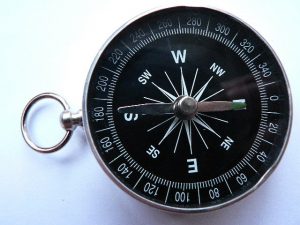 Cheaper compasses may have markings only every 5°.

The next year, a student named Rezzi wanted information about various sizes of angles:

Doctor Rick first reviewed the basics of protractor use that we have seen:

This is the case we saw above. There’s really nothing different about an obtuse angle:

I couldn’t find any examples of such a protractor online, so this is probably an imagined worst case. Normally, it will just look like this (where the 45 is there, but we didn’t have to use it): 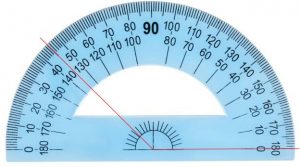 Many readers will not be familiar with the term “reflex angle”; that measures from 180° to 360°:

Here is that 225° angle, in standard position, going counterclockwise from the right; we would have subtracted 225 from 360 in order to decide to make the mark at 135: 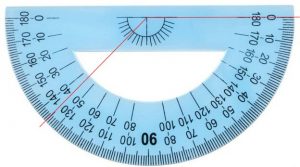 Some protractors are complete circles, so you could measure this angle directly.

Here are two other, shorter discussions of how to use a protractor, focusing on how to choose which scale to read:

What if it doesn’t start at 0?

In 2003 Gloria asked a specific question about measuring an angle, which was appended to the one above:

I replied, guessing at the meaning of the problem: 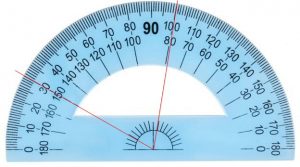 How can you make an accurate protractor?

Here is an entirely different question. In the past, we have talked about the fact that not every angle can be constructed exactly by compass and straightedge (in the post about trisecting angles); we recently looked more generally at the role of compass and straightedge in geometry. A reader named Ivan put these ideas together in an interesting question:

I focused on several different aspects of the question, starting with what compass and straightedge are primarily meant for: thinking about geometry, not making real things.

That is, even mathematicians have considered other ways to do a theoretically exact construction of 1/3 of an angle, and the same could be done for other angles, in principle. But that’s just theory; practicality is different:

The protractor in my images is very imprecise, as you may have noticed (unless it’s just the image that’s distorted); this is probably true of many. But a very exact protractor can be made without much difficulty, given that the precision need be no better than the thickness of the lines drawn. If more precise angles are needed, my guess is that you would not use a protractor at all, but a machine much like what I described.

Ivan’s question was originally titled, “Marking my own protractor”, so he was asking about practical methods without fancy machines.

Why is it called a protractor?

We can close, as we did on rulers, with a question from 1999 about word origins:

“Protract” means “extend”, and a compass can be moved in and out, so one could call that protracting! And measuring angles doesn’t sound anything like “protraction”. What’s going on?

You can envision “encompassing” something as making a circle around it, “pacing off” a circuit. As far as I can tell, the magnetic compass we briefly looked at above is called that mostly because its scale “goes around”.

The “tract” in “protract” is the same as in “tractor”, meant for pulling things like plows (or spacecraft, if you’re thinking of a “beam”). But the words “drag”, “draw”, and “draft” are also closely related; in drawing or drafting a map, you are dragging a pencil around. To “protract” a map meant to “draw it out”.

2 thoughts on “Using a Protractor”