Last week we looked at examples of induction proofs: some sums of series and a couple divisibility proofs. This time, I want to do a couple inequality proofs, and a couple more series, in part to show more of the variety of ways the details of an inductive proof can be handled.

Jay is right: inequality proofs are definitely trickier than others, particularly than series proofs, which tend to be fairly routine apart from the big algebraic step.

As written, the problem appears to mean what one of our problems last time meant: that the inequality is true for all real numbers x, for any non-negative integer n. If we check one case, n = 2, that looks right (the red curve is \(y=(1+x)^2\), and the blue line is \(y=1+2x\)): 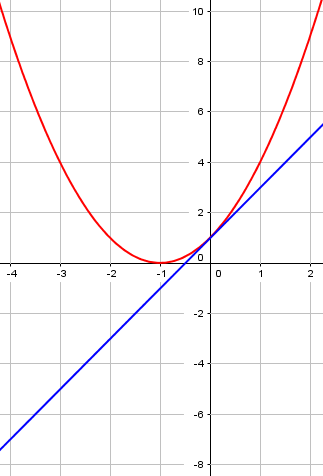 But if we try n = 3, something is wrong; the red curve isn’t always above the blue line: 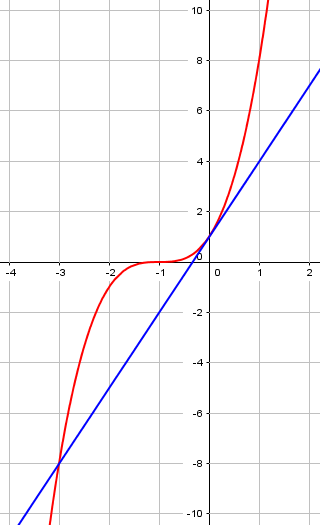 So we’ll have to clarify the problem.

Doctor Ian answered, demonstrating how one might think through such a problem from the start:

Note that he didn’t yet check the base case; and that he isn’t yet proving anything, but rather experimenting with the goal, by stating it (a hoped-for inequality) and thinking about what has to happen for it to be true, by rewriting each side to extract from it the expression found in the n = k case.

(Actually, the base case should be n = 0, as it only has to be non-negative, not positive; and the “alphas” on the two sides may not actually be equal, just in a known order.)

All of this is still informal – the sort of thing mathematicians do when they are thinking about a problem, sketching ideas for the actual work; they sweep this away when they clean up their proof for publication. Textbooks generally don’t show you this mess, and therefore can give you the impression that proofs are supposed to pop into your mind full-grown, and that if they don’t, you aren’t fit for math. Never believe that!

But he’s left the details for Jay to do, and only hinted at that issue I pointed out at the start, by saying, “show that (or explain the conditions under which) …”: As happens in real life, we will have to refine our claim before we can prove it!

He closed with a summary of how induction works:

How could this be determined? Our graphs above suggest it might be true for \(x \ge -3\); I made graphs for higher values of n and it looked as if \(x \ge -2\) might work. We could just make a guess like that and see what happens as we proceed with the proof.

So let’s try to derive this from the hypothesis. As noted, we can multiply both sides of an inequality by the same number as long as that number is positive. So we’d like to assume that \(1+x>0\), which we can do as long as \(x>-1\). (I think we’ve found where Doctor Rob’s restriction came from! We don’t know that this restriction can’t be loosened so that somewhat smaller x can be allowed; but we aren’t claiming to have found the “sharpest” condition for our theorem.)

Next, consider this question from 2003, involving an exponential inequality:

Let’s graph this one, too, just to check that \(n\ge 6\) is the appropriate condition; again, the LHS is in red (discrete dots because the factorial is only defined for integers), and the RHS is in blue: 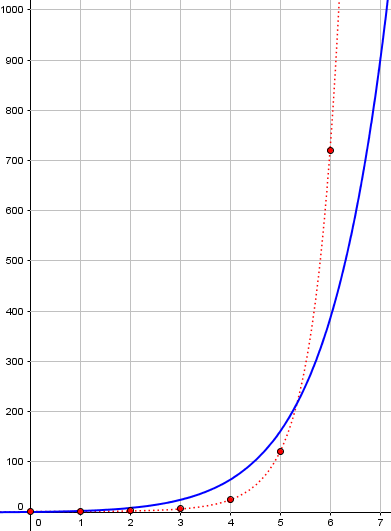 (The dotted line is a curve that passes through all the factorial points.)

We can see that the factorials don’t start exceeding the blue curve until after n = 6.

Again, we have a hypothesis and a goal. What is changing on each side? We can start with a basic fact about factorials:

This is a lot like the first inequality problem, isn’t it? We multiply by something positive on both sides, in order to make one side look like our goal; but in this case, he chose to multiply by n, and then increase it to n + 1 on the left, which increases the expression and maintains the inequality. (This is not the only way to approach it!)

Here is his proof, starting with the induction hypothesis:

Sum of cubes = square of sum

Turning to series, this question is from 1997:

The first three lines are particular cases (the first being the base case), and can be proved by calculation. The last line is what is to be proved in general, and looks tricky, considering that there is a summation on both sides!

Doctor Steven answered, starting with that formula and expanding it:

This is slightly odd, in putting the series on the right and starting on the other side; clearly this requires keeping the goal (looking like a series) in mind; but all he’s done (if I can describe expanding fourth powers as if it were easy) is to expand and simplify the formula for the next case, then split it into the formula for the assumed case plus some extras – much like Doctor Ian’s suggestion in our first example.

But I like the conclusion: “We win!” Proof is like a game, and we can celebrate at the end. That’s essentially what the traditional closing of “Q.E.D” means.

In 2001, we got another request for the same problem; Doctor Floor’s answer was added to the same page:

You may have noticed that some of us use a separate variable, such as k, in the induction hypothesis, while others stick with the same n used in the statement of the problem. This is a matter of taste, and also of how comfortable you are with reusing a variable within a restricted part of a proof. For beginners, it is probably better to use the k.

We’ll close with another series problem, this time not a polynomial:

Doctor Jeremiah answered, first suggesting that we can find a (hopeful) formula by looking for a pattern:

After referring to one of the answers we looked at last week as an example of induction, he continued:

Three steps, or two? It’s all the same thing; what he wrote as step 2 is commonly thought of as what he will call (below) steps 2 (stating the induction hypothesis) and 3 (proving it for the next case).

Here, as we’ve seen before, he is stating the goal; we need to show that these two sides are equal, using the hypothesis.

He changed the LHS while rewriting the RHS each time. Let’s write it out as one chain of equalities:

Next week, we’ll move on to the subject of the Fibonacci series, which is a playground for inductive proofs!