Recall that the domain of a function is the set of all valid input values (x), and the range is the set of all possible output values (y). It is reasonably easy to find the domain: look for what could make it impossible to evaluate, such as dividing by zero or taking the square root of a negative number, and exclude those. But finding the range is an entirely different problem. There is no one technique that will work for all functions. But there are several methods that work in reasonably nice cases.

We have collected some of our answers on both domain and range in a “selected answers” page here; I will look at several answers specifically dealing with range, and refer to more in passing.

Teresa understands the domain: \(x\) can be any real number that does not make the denominator, \(\left(x+3\right)\), equal to zero, and therefore anything except \(-3\). But how to find the range? Since she knew the answer, I could use her problem as an example, demonstrating the whole method. The key idea is to use the fact that the domain of a function is the same as the range of its inverse. (This is because the inverse must take any possible output from the function and turn it into the corresponding input; so the set of outputs of the original function is the same as the set of inputs of the inverse.) This is true even when the inverse is not actually a function, just a relation (which may have more than one value), although not all textbooks talk about this.

You can also do all this without ever thinking about inverses! All we are doing, as you see below, is solving to find \(x\) when you know \(y\), and then looking at the result to see for what values of y this can be done.

I showed all the steps of solving, because solving a rational function like this often stymies students when they first confront it. The key steps are to collect all the x‘s on one side, and then factor out the \(x\) so you can solve for it.

You may also notice that although I talked about finding an inverse, I did not swap \(x\) and \(y\) as is often taught. I discussed this recently; for this application, I find it useful to keep \(x\) and \(y\) having the same meaning throughout, to avoid confusion.

Let’s make a graph of the function, and verify what the domain and range are: 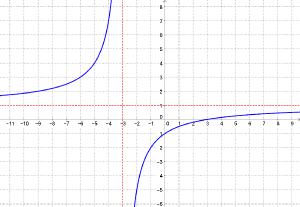 Evidently Teresa understood that well; but two days later, she wrote back with a more interesting function:

Since I had shown the general method, I wanted Teresa to at least make a start, using what I had taught; but I acknowledged that she would discover some new challenges:

She responded as well as I hoped she would, starting out well:

She got a little lost here at the end, losing sight of the goal. The next step really is pretty easy, but then the complications set in, so I chose to take it all the rest of the way, in steps. First, the easy part:

The domain of this inverse function is all real numbers except zero, so we seem to be done …

In practice, when I am thinking carefully, I try to write explicitly the condition that is implied by the radical, and come back to that at the end of my work: \(\displaystyle y = \frac{2}{\sqrt{x-4}}, y \ge 0\)

Let’s look at the graph of this function: 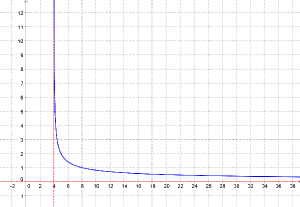 The domain and range are as we expected. (You did see that the domain was all real numbers greater than 4, right?)

For another function  similar to this, see

Here is one that is a little trickier:

Here is the graph, so we can see what Ibrahim is talking about: 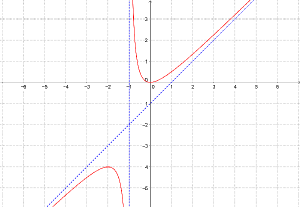 Without trusting the numbers we see on the graph, how can we know the boundaries of the range?

My first observation is that this is not really too hard for a teacher; but it may well be too hard to explain to a student!

One method is to use calculus to determine specifics about the graph (or, without any graphing tool, to use calculus alone to sketch the graph, with all important points known). Even this wouldn’t work for all functions, but it works well here.

So, again, we want to try solving for \(x\), and determine for what values of \(y\) this is possible. I just gave general instructions for this:

Let’s carry out the details:

This was a little harder than the first rational function we worked with, but quite reasonable.

I added one more idea: That without calculus or other elaborate tools, we can roughly sketch the graph, guess the range, and then prove that algebraically. Sometimes this is the best we can do:

This work with signs is essentially what we do in solving rational inequalities, as we have done earlier.

For a couple other examples of finding a range, see the following pages. In the first, Doctor Anthony uses ad-hoc reasoning somewhat like my last suggestion; in the second, Doctor Fenton finds both domain and range for a simple polynomial function, ending up by solving for \(x\) as we have been doing:

Why domain and range?

Here is a final bonus: A student asked why we call them domain and range, and I made some interesting observations about the words:

1 thought on “Finding the Range of a Function”