An interesting question that has been referred to many times since it was written in 1999 deals with averaging angles. At first the question seems trivial; then almost impossible; and then we end up with a rather simple formula that is totally unlike what we started with. And further applications lead to new issues that make it continue to interest us.

He was right that the second answer wasn’t 180, but why was that important? It seems that he wrote 180 where he meant 120, and the problem he saw was that 120 didn’t make sense as the answer. He had to clarify:

Angles can be thought of in several different ways. In geometry, we think of an angle as a mere figure composed of two rays, or as the (unsigned) “distance” between them. In trigonometry, we think of it as a rotation (clockwise or counterclockwise): a (signed) “motion”, so that different motions can result in the the same final geometrical configuration (coterminal angles). In navigation, we think of it as a direction (relative to north), and do not distinguish coterminal angles. 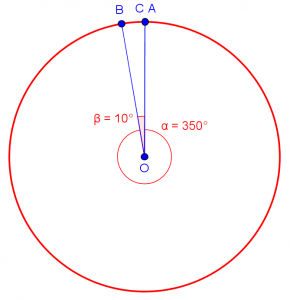 If the first rotation were -10°, the total rotation (and therefore the average) would be 0°.

But Dave is not thinking in terms of rotations! He is thinking of locations on a circle, or directions, or something of that sort: 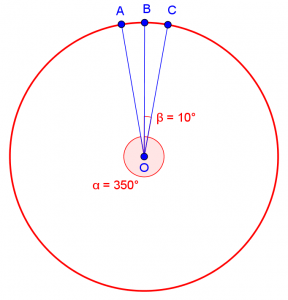 Here, we just have a point A at 350° from north (measuring angles as in headings in navigation), B at 0°, and C at 10°. Clearly, the average in this sense ought to be 0°. From this perspective, 350° is the same as -10°; signs and rotations are not the issue, just where you end up. So now I could start pondering the problem Dave had posed:

Directions are best represented by vectors

Now I have a model for what Dave might intend to do with the average. (He never did tell me, though others later did state specific applications.)  Thinking about what it would mean to average directions, I decided that the most reasonable would be in terms of vectors: Add the n unit vectors representing each direction, and divide the resultant vector by n. 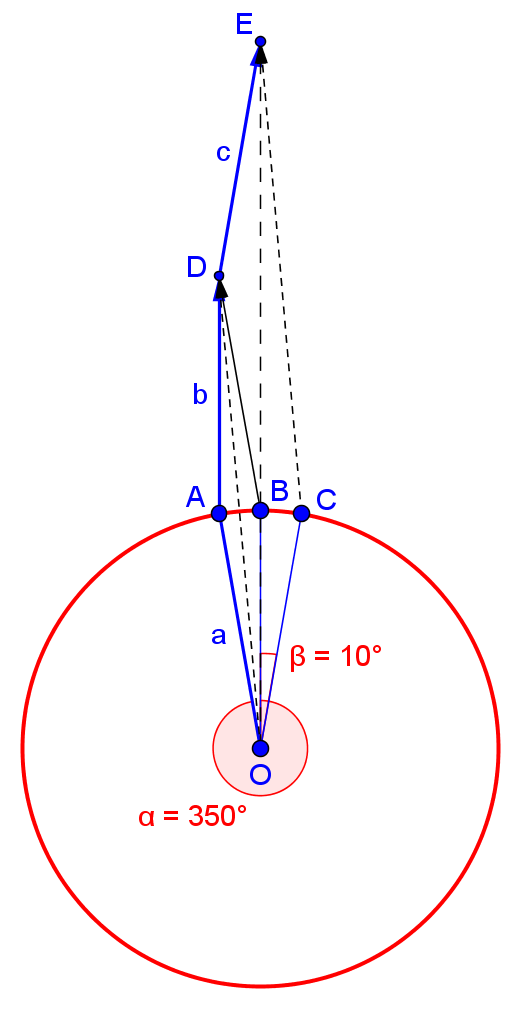 Here I have added vectors a, b, and c by putting them end to end, and the resultant vector, OE, clearly is in the direction of B as expected. (Dividing by 3 has no effect on the direction, so I don’t really need to do that for our purposes.)

I first explained with reference to the three directions in the question:

Dave wasn’t familiar with the notation \(\tan^{-1}(x)\), which is also called \(\arctan(x)\), the inverse tangent, but he was satisfied with the answer as meeting his needs.

Four years later, another visitor, Larry, read this answer, and wrote to ask why he wasn’t getting the right answers. This happens fairly often!

The issue can’t be mere accuracy; he must be doing something wrong. I took the occasion to rewrite the formula without explicit reference to vectors, to make it easier for others, and then checked that these calculation gave the correct result:

I don’t know what he did to get his wrong answer; he never responded. I tried doing the calculations with my calculator in radian mode (the usual culprit in this sort of formula), and got an answer of 0.575 radians (32.9°). This may look wrong, but in fact, if we add 3π to 0.575, we get 10 radians, showing that this answer is coterminal with the expected average. (In radians, 10 and 15 are rather large, outside of the usual range.) But this is not what Dave got. Nothing else I tried gave 9.814°. So this is a mystery. (Let me know if you figure it out.)

A couple months later, though, another visitor, Stephen, wrote to say

This was a helpful suggestion for anyone programming this formula. Computer languages commonly provide this special function that takes x and y coordinates and finds the angle to that point directly, rather than through \(\arctan\left(\frac{y}{x}\right)\), which as I had mentioned doesn’t always get the quadrant right. So I wrote up a final version of the formula:

This last link demonstrates how to get the right quadrant if you don’t have atan2, and then briefly mentions the function.  It should also be mentioned that in any programming language these functions [almost] always work with radians rather than degrees.

Among others who later wrote to us about this (and went unarchived for one reason or another), a couple were looking for a way to average wind directions, and one wanted to average the direction of a plane (in order to ignore small deviations from course and record the overall direction). The latter, I felt, really should just average angles as numbers, with some adjustment when crossing from 1 to 359. The former probably did need the vector method, but needed to recognize that there can be cases where the average (of 0° and 180°, for example) is undefined, because the vector sum is 0, which has no direction.

Bottom line: if you want to average directions specified as angles (such as headings or bearings), in Excel, you can use this formula: A = atan2(sum_of_cosines, sum_of_sines).

One of these later writers, Nick, wrote in late 2003 (unarchived),

It’s always interesting to see what others do with the ideas we put out there.