It is not unusual for mathematicians to define a concept in multiple ways, which can be proved to be equivalent. One definition may lead to a theorem, which another presentation uses as the definition, from which the original definition can be proved as a theorem. Here, in yet another good question from late May, we have two different ways to “define” the number \(e=2.71828…\), a series and a limit, and a student wants to prove directly that they are equivalent. We’ll get a proof, then dig in to really understand it.

I’m looking for a rigorous proof that the following definitions of e are equivalent:

What I’ve done so far:

I also understand this:

And so if we take a fixed value m (with m as a natural number):

I’m in particular looking for a rigorous proof, where the two sequences are named t_n and s_n.

Really grateful for any help on this!

Matthew knows how to ask a question: He has clearly stated what he wants to do, and shown a good bit of work, including where the difficulty lies. But we’ll need to get up to speed to make sure we understand the question, as well as this initial work!

What we need to prove

The two “definitions” are quite different, one a series, the other a limit. Here is how Wikipedia introduces its article on e:

The number e, also known as Euler’s number, is a mathematical constant approximately equal to 2.71828, and can be characterized in many ways. It is the base of the natural logarithm. It is the limit of \(\left(1+\frac{1}{n}\right)^n\)  as n approaches infinity, an expression that arises in the study of compound interest. It can also be calculated as the sum of the infinite series

That is, they take the limit as the actual definition, and present the series as a way to calculate it. Here is a table of the first 11 terms of the series and its sums: 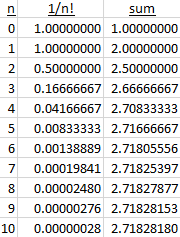 We have already reached 8 significant digits of accuracy.

Here is a table of the first 11 values of the limit:

We don’t even have one significant digit yet!

In fact, if we make the limit move exponentially faster, by using \(2^n\) in place of n, it is still slow to converge: 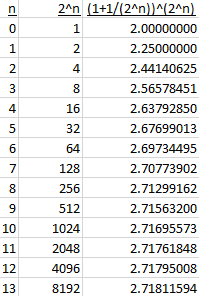 It takes 8 thousand “steps” to get 4 significant digits! (Of course, in principle we only need to do this calculation once, rather than summing terms, so it is not that inefficient to calculate, apart from the efficiency of using a very large exponent in the first place, and deciding what value to use.)

But they do approach the same limit. How can we prove it?

What he’s done so far

Let’s look at what Matthew did, which he didn’t fully explain.

His calling this the limit, however, is premature, because n is still a variable. This is the tricky part.

Doctor Fenton answered, starting his proof the same way but being more careful with limits:

I recalled a discussion of this in an old classic, Richard Courant’s Calculus textbook.

By the Binomial Theorem,

Clearly, Sn ≤ Tn, since each term in Tn is multiplied by a product of factors, each less than 1, to obtain the corresponding term of Sn.

Also, notice that both sequences are increasing and bounded, so each converges.  Let

There’s a typo in that summation, which I can’t remove because it figures into the discussion; don’t worry if you find it.

Matthew replied, catching that error and helping us out in the process:

Hi, thanks so much for your quick answer. I think I’m getting closer but there’s still some things I’m not getting.

If I expand this last series on the left I get:

Am I making sense? Sorry if I’ve got this confused somewhere!

The “or maybe” is really the same summation, with the first two terms stated explicitly as we saw before.

Doctor Fenton confirmed his correction, and added some notation to make the details easier to talk about:

You are correct.  I was hurrying to get ready for a meeting and typed m instead of k.

The idea is to take a sum of a fixed number m of terms from Sn, so that the partial sum Sn is larger than the sum of its first m terms.

Sorry to put you to so much work over a typo.

Matthew wrote back, nicely stating what he did and did not understand:

Hi there, many thanks for your further response and for clarifying.

I think I now understand the proof in general terms but I’m not sure I fully understand all the details. In particular I’m not clear exactly how it follows that Tm < S.

We have the following inequalities:

Sn < S for all values of n (as Sn is monotonically increasing, approaching the limit S)

Sn,m <  Tm for all values of n (as Sn,m contains the same terms as Tm terms except with further positive coefficients less than 1)

I’m not sure how I can show that Sn,m does not approach the limit of Sn as m → ∞, although it seems highly intuitive to assume it does not.

Again, hope I’m making sense and not getting mixed up, or if I’m missing something obvious.

It can be helpful to look at some actual numbers. Here is a table of values of our \(S_{n,m}\) showing the inequalities Matt points out:

But these inequalities in themselves don’t lead us to the conclusion that \(T_m\) and \(S_n\) have the same limit.

I’m not sure I can get from these inequalities that Tm < S.

That’s exactly correct.  Sn,m is the sum of the first m terms of Sn, and in this part of the argument, m is fixed.

His table would differ in just one point, taking the limit of each column rather than just an inequality:

The fact that we are holding m fixed and then letting n vary gives us a grip on the limits.

Hi – thanks for your encouraging response.

I’ve been wrestling with this part of the proof:

I think I’ve got it now!

then it follows that a ≤ b.

And the rest follows!

So think I’m home and dry with this one! ? (assuming my above reasoning is correct … ?)

Thanks again for taking the time to read and respond.

So we have the proof.