For the next couple weeks, we’ll look at a few “dissection problems”, which involve cutting a shape in various ways. Here, we look at what turns out to be a simple problem, though it seems at first that it would be complicated: dividing a cake into pieces with the same amount of cake and the same amount of frosting. I’ll start with a couple answers that gave only hints, and work up to full solutions, so you can discover it at your own pace.

We’ll be seeing several variants of the problem, of which this is relatively simple: We are told how big the square is (but not the cake’s height), and want to cut it into 5 equal parts. But rather than make 4 cuts parallel to the side, as we would expect (especially if two people want most of the icing!), we are required to make wedges that meet at the center:

Because the cuts are made vertically, it doesn’t matter how tall the cake is; the volume of each piece is proportional to the area on top. The only question is, how do we find the right locations?

Two months later, we got a similar question with an additional requirement:

We still need vertical cuts, which prevents some trickery; but now we need to make both the volume (cake) and the amount of surface area (icing) the same for each piece. That seems like a much bigger challenge. Pam has presumably used symmetry to make 4 or 8 pieces that are all congruent, and therefore have the same volume and area:

But you can’t do that with five pieces, can you?

I answered again, with more or less the same hint:

Let’s take it a little further this time. Here we weren’t given specific lengths, so a general description is all that is expected; but let’s keep the side lengths at 20 cm from the first problem. We saw that the area of a triangular piece is \(5a\), using the variable we have here; the area of the quadrilateral piece is \(5a + 5b = 5(a+b)\), still 5 times the amount of perimeter used by the piece (the d in my first answer). This is the key idea.

The answer, with details

At the end of that answer, I referred to the following answer, from 1999, which we can look at now:

The first attempt doesn’t use the center; but the second is just what was described – if the measurements are right.

Note that we are back to a question that doesn’t worry about the icing, though the answer will.

Here’s what this looks like when \(s=20\) as in the first question: 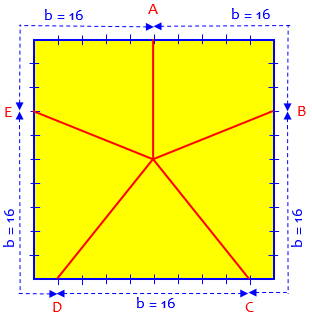 So that’s the answer. But is it true?

Each side adds up to \(s = 20\). Here we see the 5 pieces split into 9 triangles, along with the fact that they all have the same altitude. 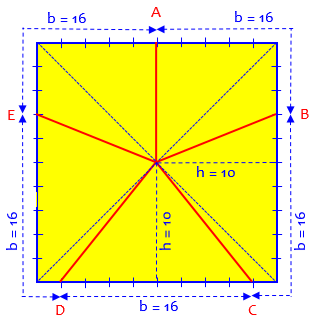 Here is a cake with the first cut at a corner: 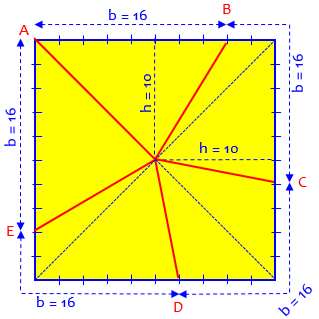 Now, it’s curious that all these questions were about five pieces; we’ve had a couple with different numbers, too. What if there were 13? Consider this question from Jim, in 1998:

This is the most detailed version of the problem we have, with complete dimensions, and the requirement that both cake and frosting (also called icing) be divided equally. We don’t really need any of the dimensions, though we’ll see a little issue with the thickness of the frosting.

“Try a smaller number” is a standard piece of advice when you face a big problem. Can you see why 5 is the best choice?

“Try a simpler but similar problem” is also standard; thinking “what if it were round?” can lead to the idea of dividing the perimeter equally, though one might not at first think it could work.

Jim replied, wanting more than just a hint (without directly saying that he really needs more than the hint!):

There’s one little issue with the thickness of the frosting: we are cutting through the frosting at an angle, so the parts on the sides are not exactly rectangular, and therefore not quite proportional to their width. You can see the issue here: 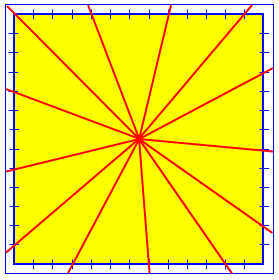 Pieces closer to the center have a wider angle, making trapezoids with a little more area. But the standard puzzle assumes the icing is very thin (perhaps just a glaze), minimizing this problem!

What about the angles?

We’ll close with a question about only 3 pieces; by now you know what to do, but what if you had to identify the angles for the cuts? This question is from 2001 again:

This one is not posed in terms of a cake, and doesn’t mention the equivalent of icing; Frank is apparently thinking of the fact that three sectors of a circle with central angles of 120° will be equal. What would the angles be for a square?

Doctor Rob answered, starting with the same idea we’ve already seen several times, and then calculating the angles. For simplicity, he uses a coordinate system and makes each side 2 units long:

The rest, of course, are similar.

Here is an accurate picture (sides marked in thirds): 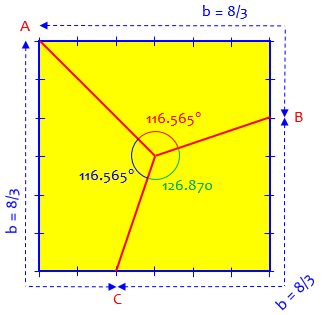 Starting vertically, we get different angles:

Here is the picture: 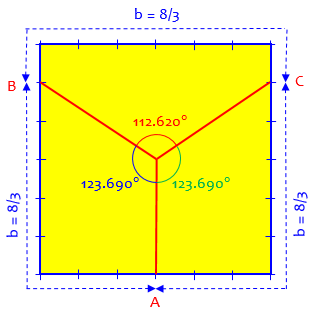 It’s easier, of course, just to measure around the perimeter; but it’s worth seeing how the angles differ from the 120° of a circle.